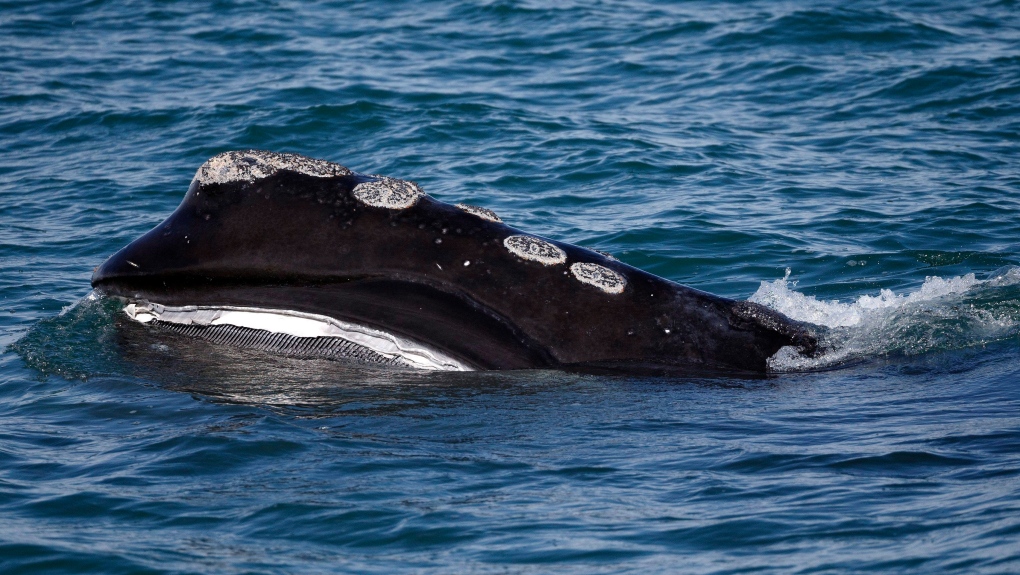 The baleen is visible on a North Atlantic right whale as it feeds on the surface of Cape Cod bay off the coast of Plymouth, Mass. on March 28, 2018. THE CANADIAN PRESS/AP, Michael Dwyer

FREDERICTON -- The latest dead North Atlantic right whale spotted in the Gulf of St. Lawrence is believed to be a large female, but bad weather may delay efforts to recover the carcass for more detailed study.

Fisheries and Oceans Canada says the whale was spotted northeast of the Iles-de-la-Madeleine on Thursday. Fishery officers were able to install a satellite tag to track it.

Tonya Wimmer, executive director of the Marine Animal Response Society, said stormy conditions expected over the next few days will complicate getting the whale to shore for a necropsy to establish the cause of death.

"Luckily they were able to tag the animal, so the hope is that once the weather settles down, it will be findable again," she said.

A nine-year-old male right whale was found dead off the coast of New Brunswick earlier this month, but preliminary necropsy results were inconclusive.

The latest discovery came the same day a study on the endangered North Atlantic right whale population was published finding that more than half of the 70 known deaths over the last 16 years were caused by entanglement in fishing gear or vessel collisions.

The study makes a number of recommendations including efforts to update fishing gear to reduce the chance of entanglement and further restrictions on vessel speed and activity when whales are present.

In response to the study, Fisheries and Oceans Canada says it is committed to protecting North Atlantic right whales.

In a statement, Barre Campbell, senior adviser for media relations, says the department has been working closely with partners in both Canada and the United States to address threats facing whales.

"With confirmed right whale sightings in Canadian waters this season, DFO has already implemented a number of closures for snow crab and lobster fisheries (and all other non-tended fixed gear fisheries) since April 28, 2019 in Atlantic Canada," Campbell wrote.

There are estimated to be about 410 North Atlantic right whales left in the ocean.

Wimmer said word that the latest dead whale is a female is particularly troubling because healthy females are needed to restore the population. "It's tragic, because they have babies, and babies after them," she said.

In recent years, deaths have outpaced births. No right whales died in Canadian waters last year, but 12 were found dead in the Gulf of St. Lawrence in 2017, and another five died in U.S. waters that year.