Last month was 6th hottest July on record in 143 years

Last month was 6th hottest July on record in 143 years

The month of July 2022 was the Earth’s sixth-warmest July on record in 143 years, according to the U.S. federal agency that studies oceans, the atmosphere, and coastal areas.

The National Oceanic and Atmospheric Administration (NOAA) also notes the five warmest Julys have all been recorded after 2016 and there is a greater than 99 per cent chance that this year will rank among the 10 warmest years on record.

Meanwhile, extreme events are a natural part of the earth’s climate system.

“What we are seeing is that even a small temperature increase in the average global temperature can lead to big changes in extreme weather events,” Ahira Sanchez-Lugo, a global climate expert at NOAA’s National Centers for Environmental Information, told CTVNews.ca in a Zoom call on Thursday.

With global temperatures changing, Sanchez-Lugo said, tropical storms are moving slower, and the rains accompanying these storms are increasing. In July, nine storms were produced across the globe (which is near-normal activity)- of which two reached major tropical cyclone strength.

The NOAA report said that while temperatures including in most of North America, Europe, and Asia have been above average, other countries including Spain, Portugal, Italy, the U.K., Japan, and China, have registered record-warming temperatures in July.

While parts of the globe such as western India, Pakistan, and most of Australia were facing sweltering heat, other parts were experiencing near-to-cooler-than-average temperatures. 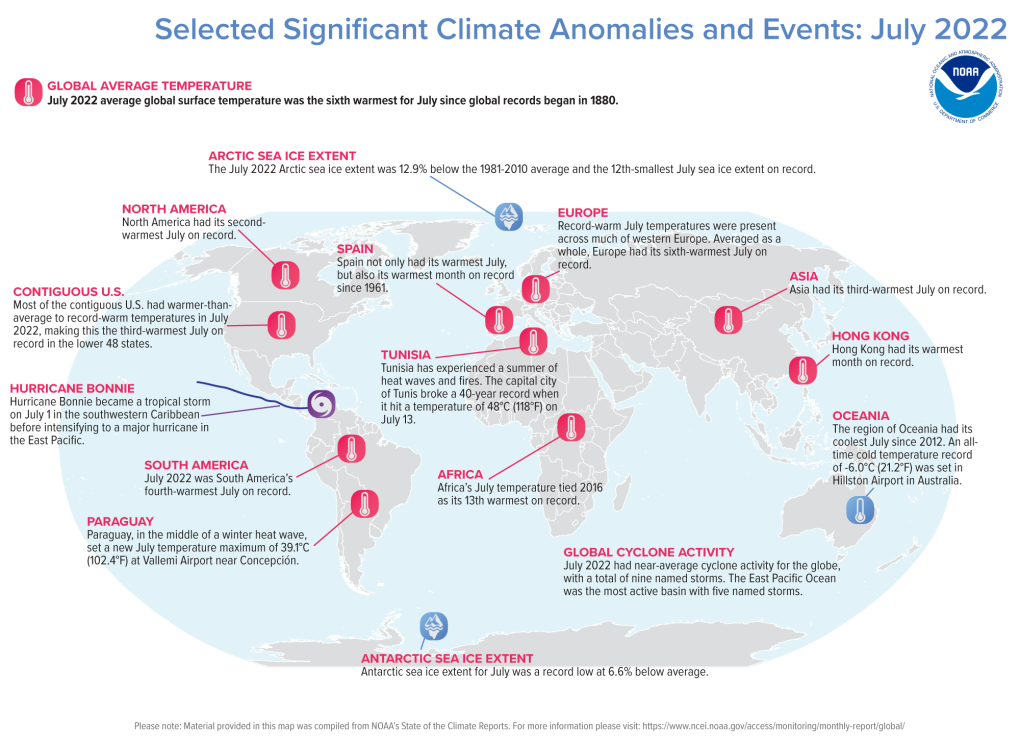 But Britain is not alone in fighting such extreme shifts in climate. By 2050, about 1/2 of the European population may be exposed to a high or very high risk of heat stress in summer.

In July, wildfires raged across different parts of the world such as Spain, Portugal, western France, Ireland, and Croatia. Extreme temperatures also ignited drought-fueled wildfires in western parts of the U.S. while a series of heatwaves gripped some provinces and territories in Canada this summer, pushing them to log record-breaking temperatures.

Studies have shown that hot days are not only getting hotter but are getting more frequent across the globe.

The high temperatures moved further north and east across countries such as Germany and parts of Scandinavia, with local July and all-time records broken at several locations in Sweden.

Floods and droughts: While parts of the globe faced soaring temperatures, countries such as India, Bangladesh, and Pakistan faced torrential rains resulting in flash flooding in the months of June and July.

According to a report by Organization for Economic Co-operation and Development (OECD), for the population, 90% of the exposure in the 2070s will be contained within the 11 countries of China, the U.S., India, Japan, Thailand, Vietnam, Bangladesh, Myanmar, Egypt, Nigeria, and Indonesia.

Sanchez-Lugo said with the Earth’s atmosphere getting warmer, it can hold more water vapour, which means that more consecutive dry days are followed by a lot more rain in areas that are not used to receiving that much precipitation.

Directly or indirectly, changes in temperatures are impacting our lives and in extreme weather conditions, it is costing people’s lives.

Sanchez-Lugo said the climate changed naturally in the past, but that change took thousands of years and that gave the environment enough time to naturally adapt to the changes.

But the Earth's climate is changing to a warmer climate at a much more rapid pace, making it warmer than it was 30 to 50 years ago. “We're not adapting to those changes as fast as the climate is changing. So that makes us more vulnerable when it comes to these extreme events,” Sanchez-Lugo said.

Prolonged exposure to very high temperatures can lead to heat strokes, heat exhaustion, and even death. Most vulnerable to such extreme temperatures are the elderly, people working outdoors, and those with pre-existing conditions

In B.C., there were 16 suspected heat-related deaths between July 26 and Aug. 3, and more than half involved people who were 70 years or older. A July 2022 report by World Economic Forum found a connection between heat waves and humidity to a rise in symptoms in people with depression, generalized anxiety disorder, and bipolar disorder.

IS THERE A SAFE PLACE?

“Unfortunately, no,” said Sanchez-Lugo. “Because there's no part of the globe that will not experience the effects of climate change.”

Even though the extreme events might vary from place to place, everyone will still feel the effects of extreme temperatures.

Sanchez-Lugo said we had built our society on old climate normal but now we need to adapt to the new climate—the warmer climate.

A new study in Nature Climate Change shows that in 2000-2021, the western U.S. was the driest 22-yr period since A.D. 800 due to the Earth’s changing climate, and “will very likely to persist through 2022, matching the duration of the late-1500s megadrought.”

Police in Halifax say they made an unspecified number of arrests during a massive street party involving thousands of people near Dalhousie University.

Police firing tear gas after an Indonesian soccer match in an attempt to stop violence triggered a disastrous crush of fans making a panicked, chaotic run for the exits, leaving at least 125 people dead, most of them trampled upon or suffocated.

How a deadly crush at an Indonesia soccer match unfolded

A soccer match at a stadium in Indonesia has ended in disaster, with at least 125 people killed and more than 320 injured after police sought to quell violence on the pitch, authorities said on Sunday. This is how events unfolded.

Marking one month as a judge on the Supreme Court of Canada, Michelle O'Bonsawin, speaks with Evan Solomon about why she wants people to see her as a judge first and the first Indigenous justice to sit on Canada's highest bench, second.

Hurricane Orlene grew to Category 3 strength on Sunday as it headed toward Mexico's northwest Pacific coast between the tourist towns of Mazatlan and San Blas.