Lasers on a thumbnail reveal Franklin expedition diet, cause of death 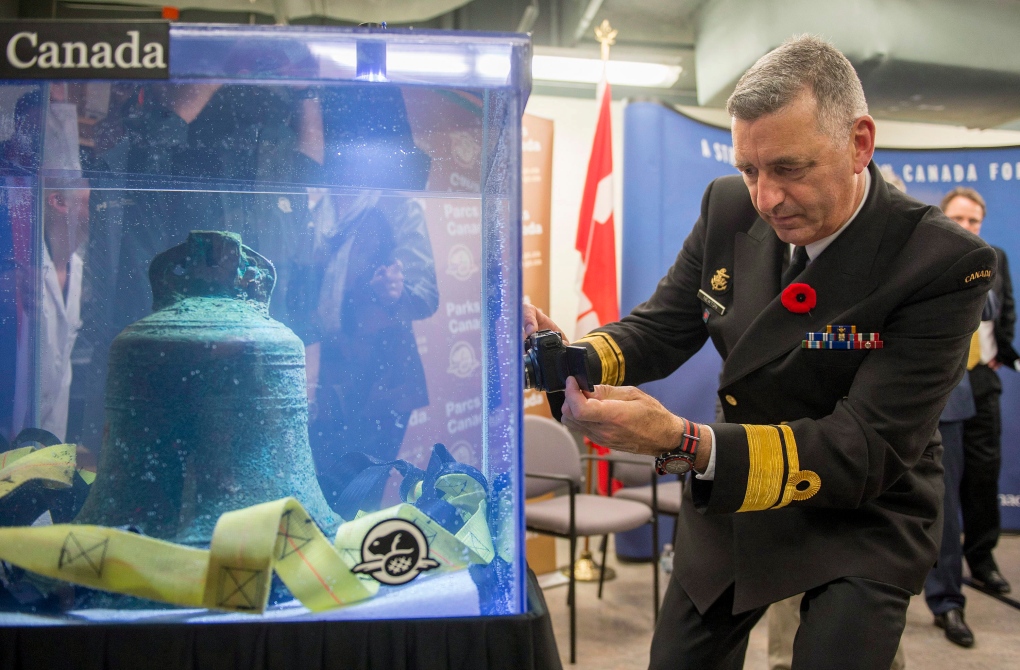 Royal Canadian Navy Rear Admiral John Newton takes a picture of the ship's bell from the recently discovered Franklin Expedition shipwreck HMS Erebus in Ottawa on Thursday, Nov. 6, 2014. The shipwreck from the famed expedition in search of the Northwest Passage was found during the 2014 Victoria Strait Expedition. (THE CANADIAN PRESS/Justin Tang)

New research has shed more light on one of Canada's enduring mysteries -- the fate of the Franklin expedition.

Scientists used lasers and high-energy beams from the Canadian Light Source in Saskatoon to illuminate the last few months of the doomed 19th-century British voyage to the Northwest Passage.

The study, published in the Journal of Archaeological Science, firms up earlier conclusions that the Franklin's 129 crew members didn't die of lead poisoning from canned food. It also suggests the expedition was running low on supplies long before its ships became stranded in ice -- all from the careful examination of a thumbnail.

"This is kind of like a Canadian myth," said co-author Laurie Chan. "I get excited at the opportunity to work on it and talk about it."

The Franklin expedition headed north, never to return, in 1845. Some remains of its crew have been discovered, along with ghastly evidence of cannibalism. Its two ships, Erebus and Terror, were found within the last two years by underwater archeologists.

But how things went so badly wrong has remained a mystery and a legend.

The latest chapter began two years ago. Jennie Christensen, an environmental consultant with expertise in toxicology, thought it would be productive to use the latest laser technology to examine one of the Franklin corpses discovered on Beechey Island in 1984.

She got in touch with Chan, a colleague at the University of Ottawa.

The team applied to the Museum of History in Ottawa and the Inuit Heritage Trust, which has custody of the bodies. Eventually, they were granted a small piece of toenail from able seaman John Hartnell.

The toenail was found to be contaminated so they turned their attention to a thumbnail.

They used lasers and the University of Saskatchewan's synchrotron to peer inside the nail to a layer unaffected by outside contaminants. A nail grows about three millimetres a month, so it provided a pretty good picture of what Hartnell had been eating and the state of his health in the last weeks of his life.

What it revealed was a long-standing, severe zinc deficiency.

"That zinc deficiency would explain that he had a very low immune function," Chan said. "In the tough environment, he probably contracted infections and died from (tuberculosis)."

Hartnell was so weak in the month before he died, his body released all the lead that had been stored in his tissues. That caused previous researchers to suggest lead poisoning was the culprit.

The nail also revealed that Hartnell had eaten very little meat, despite large reserves of canned meat in the ship's hold.

"We see a clear decline of meat consumption," said Chan. "If all the canned food (had lasted) he should not have that problem. It's probably because some of the canned food was spoiled."

Nor were the sailors able to turn to the sea to replenish their stores. Hartnell's nail showed little seafood residue.

"We would expect, with the meat declining, he would eat a lot of seafood. But not really. Either he was not successful at getting seafood or they were just not able to do it."

Chan said the results pertain only to Hartnell. But using the same technology on other Franklin bodies could shine further light on a story that has inspired poets, songwriters and novelists.

"Being able to have the opportunity to work on this and try to contribute to solve this puzzle is an honour," Chan said. "Hopefully, we'll be able to continue working on finding more about them."

This is a corrected story. An earlier version said it was the toenail that was key to the findings.