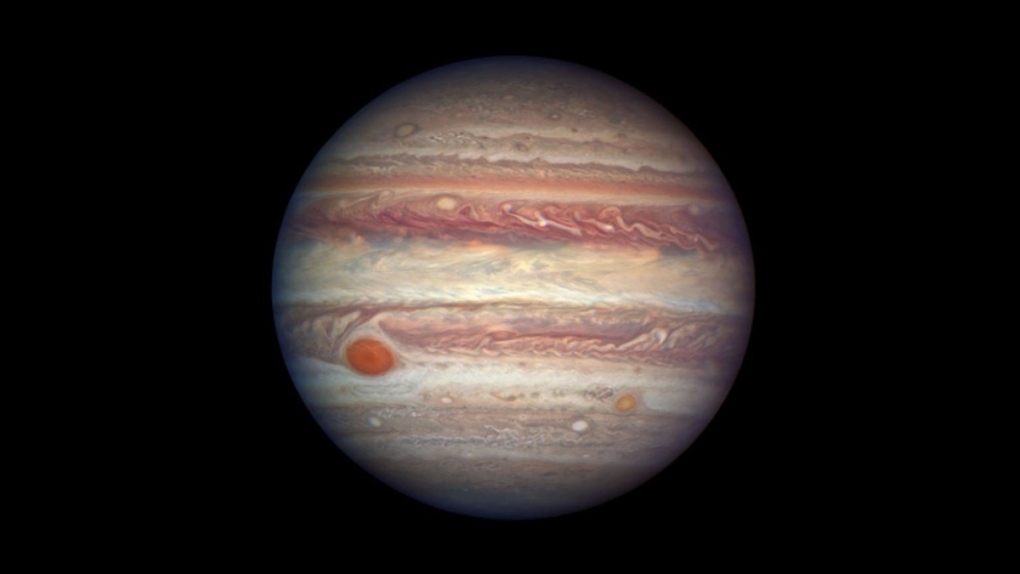 This image from NASA shows Jupiter at a distance of about 668 million kilometres from Earth, on April 3, 2017.

TORONTO -- Jupiter’s infamous red spot, a massive storm larger than the Earth itself, has been speeding up its churning, according to new analysis, with its outer winds exceeding 644 kilometres per hour.

The change was noticed by looking at more than a decade of Hubble Space Telescope observations of the planet.

Hubble has regular “storm reports” for Jupiter, and scientists noticed that in a high-speed ring just within Jupiter’s red spot, the overage wind speed had increased by eight per cent from 2009 to 2020.

While it may not sound like a big change, it speaks to how prolonged observation of celestial bodies through tools such as the Hubble Space Telescope can allow us to understand their patterns better, and figure out how these enormous storms function.

Scientists observed that the inner ring of the vortex, which humans first noticed more than 150 years ago, is moving much slower than the outside, according to a news release.

Michael Wong of the University of California, Berkeley, led the investigation, and said in the release that it’s hard to know what the increase in speed means.

“That's hard to diagnose, since Hubble can't see the bottom of the storm very well. Anything below the cloud tops is invisible in the data," Wong explained. "But it's an interesting piece of data that can help us understand what's fuelling the Great Red Spot and how it's maintaining energy.”

The massive red spot has fascinated humans for over a century. We now know that the structure of the storm itself is layered, with high clouds at the centre, and was formed by material from the planet’s centre welling up. Scientists have observed that the shape of the spot has changed over the years, shrinking slightly and becoming more circular as opposed to oval.

The change in winds on Jupiter amounts to a difference of just 2.7 kilometres per hour, researchers say.

“We're talking about such a small change that if you didn’t have 11 years of Hubble data, we wouldn't know it happened,”Amy Simon, with NASA’s Goddard Space Flight Center, said in the release. "With Hubble we have the precision we need to spot a trend.”

The observations are so specific that researchers were able to note an abrupt change in winds in 2017 when there was another large storm near the red spot.

Whether Jupiter’s red spot will continue speeding up, and what exactly it means for the planet, is yet to be seen. But Hubble is keeping an eye out.