It's the U.S.' deadliest avalanche season in years. Experts say COVID is partially to blame 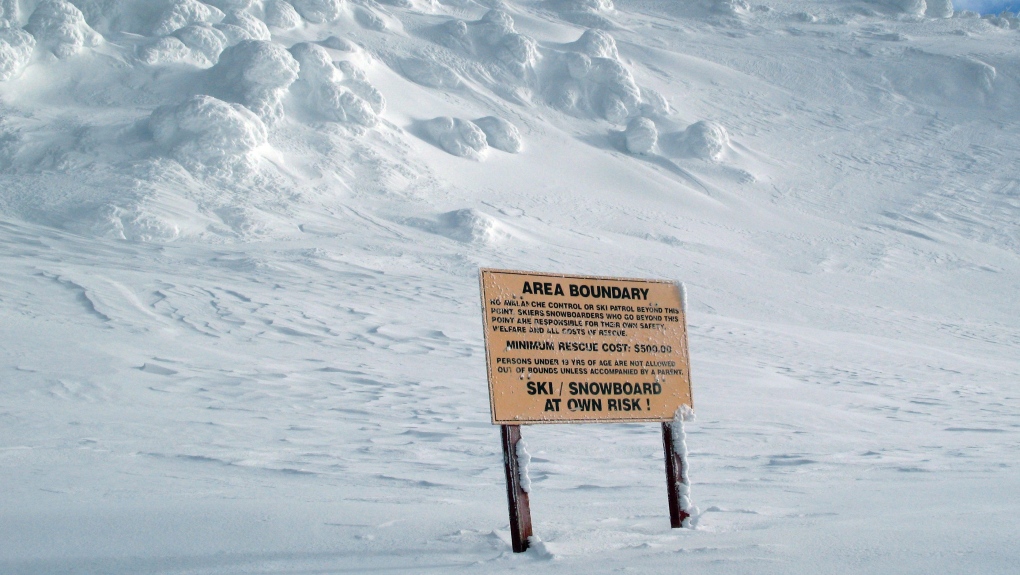 In this file photo, a warning is posted on top of the Gem Lake chair, telling skiers and snowboarders to stay away from the area out of boundaries Wednesday Jan. 19, 2011 at the Big White ski resort near Kelowna B.C. (THE CANADIAN PRESS / Jacques Boissinot)

The coronavirus pandemic has wreaked havoc on the U.S. economy, health care system and schools and some experts say it's also to blame for a recent spike in avalanche deaths. Seriously.

So far this winter season, 32 people have died in U.S. avalanches, according to the Colorado Avalanche Information Center (CAIC). That's not far from the record 36 deaths set in 2008 and reached again in 2010.

But a unique combination of climate- and pandemic-related trends could see the U.S. break the record. Here's why:

The National Oceanic and Atmospheric Administration (NOAA) says the three factors needed for an avalanche to occur are a slope, snowpack and a trigger.

Slope is obvious. But snowpack refers to the accumulation of snow on the ground.

Every storm brings a different type of snow, which builds in layers. This year, the weaker layers are deep in the snowpack, while the stronger layers are on top. That makes for an incredibly unstable surface, says Brian Lazar, deputy director at CAIC.

"This year we are seeing a pretty dangerous snowpack, the kind of unique conditions that only come around once every 10 years or so," Lazar told CNN. "This structure is highly conducive to producing avalanches."

"Like any structure, you don't want your weakest materials at the bottom, so when you build a snowpack structure with weaker layers under stronger layers, its the perfect condition to produce avalanches," he said.

"This year was characterized by early season snowfall that stuck on the ground followed by a fairly pronounced drought period, and when you have these drought periods during cold, clear conditions, it turns the existing snow on the ground into weak layers," he said.

...BUT PEOPLE IN THE BACKCOUNTRY TRIGGER THEM

About 90per cent of avalanche accidents are triggered by the victim or someone in the victim's group, according to the Utah Avalanche Center.

With the coronavirus pandemic still raging across the U.S., more people than ever are heading to the mountains to enjoy nature and avoid crowds, where the virus spreads. Many are taking up skiing, snowboarding and snowmobiling.

It's a trend that extends across the country, including many public and national parks, according to Dr. Karl Birkeland, director of the U.S. Forest Service's National Avalanche Center.

Although more visitors is usually a good thing, this season's weak snowpack has made winter sports a lot more dangerous -- especially in the backcountry, where avalanches are common.

"We are seeing dramatic increases in use in our public lands, so there's more people out there skiing and snowboarding, and it means there's more potential triggers," Birkeland said. "The pandemic has definitely increased the number of people going into the backcountry, which increased our exposure to potential avalanche accidents."

But a lot of these people don't have experience in winter sports, aren't familiar with the terrain and lack avalanche rescue gear, said Craig Gordon, a forecaster for the Utah Avalanche Center.

He suggests visitors check avalanche forecasts before embarking on adventures and carry safety equipment, such as shovels and beacons, which emit radio signals used to locate buried victims.

"No matter how you plan to recreate in the backcountry, make sure to get the gear, training, forecast, and get out of harms way," Gordon said.

More than 300,000 COVID-19 cases logged in Ontario since beginning of pandemic

Vaccine tourism is both unethical and bad for business, experts say