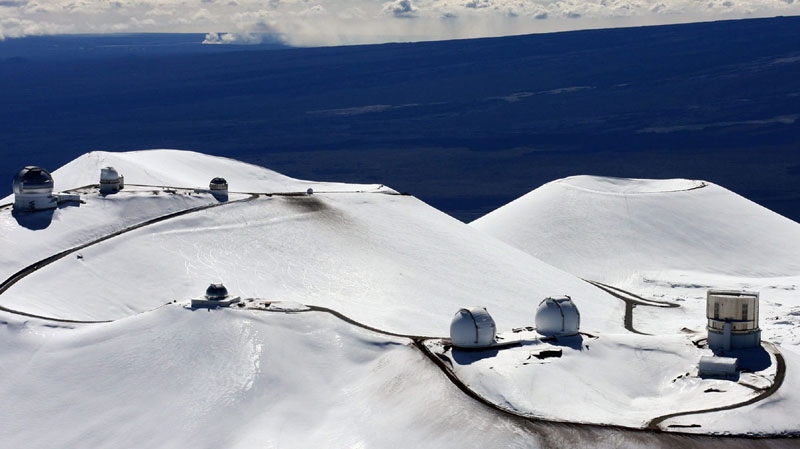 In this Jan. 6, 2009 file photo, the astronomy observatories atop the snow capped mountain of Mauna Kea are seen near Hilo, Hawaii. (AP Photo/Tim Wright)

CAPE CANAVERAL, Fla. -- A newly discovered object from another star system that's passing through ours is shaped like a giant pink fire extinguisher.

That's the word this week from astronomers who have been observing this first-ever confirmed interstellar visitor.

"I'm surprised by the elongated shape - nobody expected that," said astronomer David Jewitt of the University of California, Los Angeles, who led the observation team that reported on the characteristics.

Scientists are certain this asteroid or comet originated outside our solar system. First spotted last month by the Pan-STARRS telescope in Hawaii, it will stick around for another few years before departing our sun's neighbourhood.

Jewitt and his international team observed the object for five nights in late October using the Nordic Optical Telescope in the Canary Islands and the Kitt Peak National Observatory near Tucson, Arizona.

At approximately 100 feet by 100 feet by 600 feet (30 metres by 30 metres by 180 metres), the object has proportions roughly similar to a fire extinguisher -- though not nearly as red, Jewitt said Thursday. The slightly red hue -- specifically pale pink -- and varying brightness are remarkably similar to asteroids in our own solar system, he noted.

Astronomer Jayadev Rajagopal said in an email that it was exciting to point the Arizona telescope at such a tiny object "which, for all we know, has been travelling through the vast emptiness of space for millions of years."

"And then by luck passes close enough for me to be able to see it that night!"

Trillions of objects from other star systems could have passed our way over the eons, according to Jewitt.

It suggests our solar system ejected its own share of asteroids and comets as the large outer planets -- Jupiter, Saturn, Neptune -- formed.

Why did it take so long to nail the first interstellar wanderer?

"Space is big and our eyes are weak," Jewitt explained via email.

Anticipating more such discoveries, the International Astronomical Union already has approved a new designation for cosmic interlopers. They get an "I" for interstellar in their string of letters and numbers. The group also has approved a name for this object: Oumuamua (OH'-moo-ah-moo-ah) which in Hawaiian means a messenger from afar arriving first.