Insect discovered in B.C. caves could be a survivor from ice age 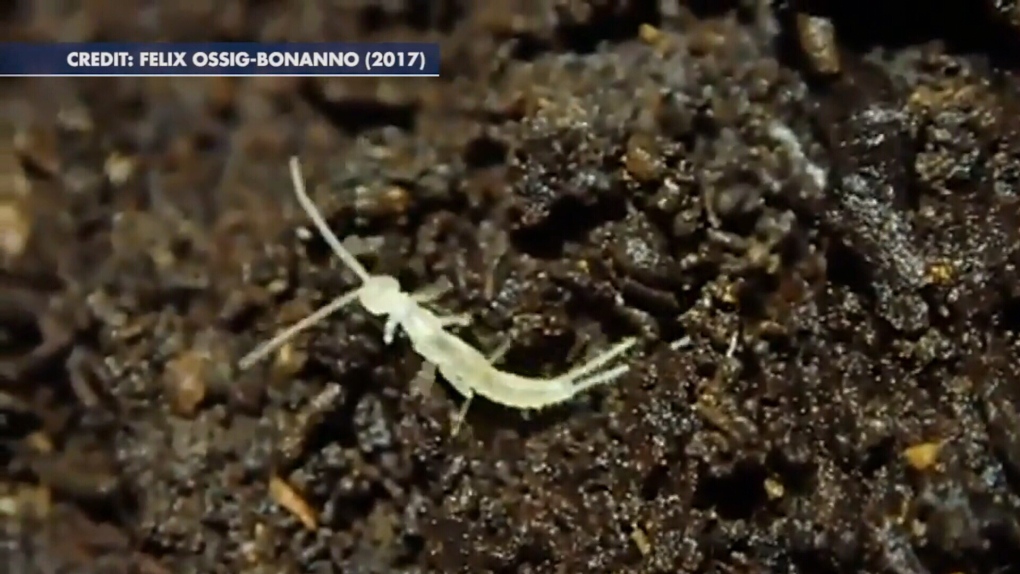 A dipluran, a type of arthropod - a new species was recently discovered in a cave near Port Alberni (Felix Ossig-Bonanno)

VANCOUVER -- A newly discovered cave-dwelling species of insect found in British Columbia could be a survivor from the last ice age, scientists say.

Haplocampa wagnelli, the arthropod found in a limestone cave near Port Alberni on Vancouver Island, is about three to four millimetres long, with six legs, no eyes, and a whitish, almost transparent colour.

Alberto Sendra, lead author of a study published in the journal Subterranean Biology on Tuesday, said the little bug's existence opens up possibilities of how species survive in different climates and conditions.

"This is a very intriguing species because it looks like it lived underground in caves -- for more or less a long time," Sendra said in an interview.

"This means they can survive in the glacial period. And this is very remarkable because there are no examples of species that live in subterranean areas so up north."

Sendra, a professor of animal biology at the University of Alcala in Madrid, said there is a possibility the insect migrated north from the United States and settled in the caves in Vancouver.

He said he could not say how old the insect is -- just that it is primitive, and its discovery raises a number of questions.

"How can they survive there? It opens up the possibility in the future to search for species in other places where nobody looks for them," he said.

"We always look in warmer climates in the south and this species suggests we need to look for this more in the Northern Hemisphere."

A group from the Central Island Caving Club, including Wagnell, first recorded the critter in 2017, and Sendra said he spent the last year studying it.

Unlike most cave-adapted species that are elongated and slender, this insect has only slightly elongated antennae and legs and a thicker body, according to a news release announcing the study.

It also shows a close relationship with species found in Japan and Siberia, which is evidence for dispersal events where populations would cross over the land bridge that used to connect America and Asia, the release stated.

The study said Vancouver Island has more mapped and explored caves than the rest of Canada combined, and many contain unique features, including streams and rivers running through them most of the year.

The caves help the streams maintain constant water temperatures and quality year-round, which helps support a variety of fish and wildlife, the study said, noting little has been done to protect the caves from logging, mining and recreational practices.

Some of the caves have been misused and more needs to be done to protect them and the unique wildlife they support, researchers said.