In rare display, northern lights could be visible across Southern Canada Sunday

The northern lights are expected to glimmer over much of Canada Sunday night in a rare display that could reach as far as southwestern Ontario and Vancouver Island.

The display, also known as Aurora Borealis, would be the result of an unusually large July 14 coronal mass ejection -- a huge explosion of plasma and magnetic field from the sun’s corona -- colliding with the earth’s magnetic field.

According to the U.S. National Oceanic and Atmospheric Administration (NOAA), which provides aurora forecasts, this solar phenomenon could even make the northern lights visible as far south as New England in the U.S. -- well below their usual range.

The NOAA’s three-day aurora forecast shows that the lights should be visible across much of Canada from an hour after sunset until an hour before sunrise.

There are several factors that will contribute to whether or not you’ll be able to see them.

If you live in a city, you’ll need to venture out of town to a dark place as light pollution can drastically obscure aurora visibility. Higher elevations, like hilltops, will give you an even better view. However, if the sky is clouded over -- as is currently forecast for much of southwestern Ontario -- you’ll be out of luck. Moonlight can also affect the visibility of aurora, though since the moon will be in its third quarter, it shouldn’t completely obscure the display.

The NOAA’s website also has a 30-minute map-based aurora forecast that can help you find the precise time when the northern lights will be dancing above you.

To further help plan your sky-gazing night, search for moonrise and moonset times for your location with online calculators, like this one on timeanddate.com. 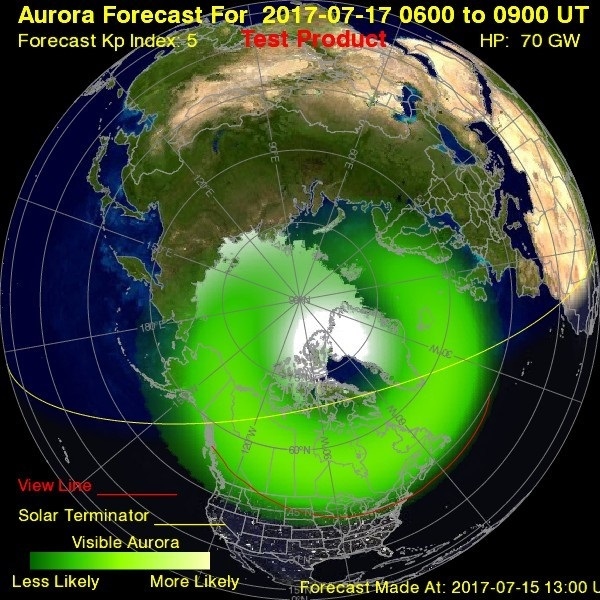