In New Jersey, a slow-motion evacuation from climate change 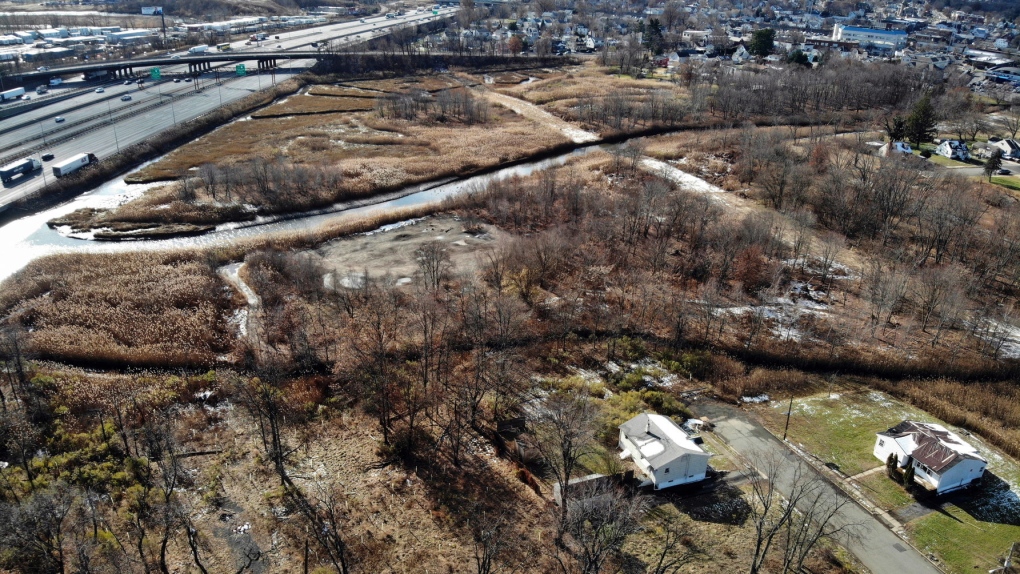 A flood-plain forest grows now where there used to be houses in the Watson Crampton neighborhood in Woodbridge, N.J., as seen from the air on Thursday, Dec. 5, 2019. (AP Photo/Ted Shaffrey)

WOODBRIDGE, N.J. -- Housing is in high demand in the heavily populated northeastern United States. But in Woodbridge, New Jersey, the state has bought and torn down 145 homes since 2013 and returned the land to nature, with eight homes demolished this month alone. Dozens more are slated to be torn down in the near future.

Some neighbourhoods in this town of over 100,000 residents just off the bustling New Jersey Turnpike are projected to be partly or fully underwater in coming decades as global sea levels rise.

Earlier this month, Patricia Kambach, 80, went inside rather than watch a crew demolish her longtime neighbour's home. Kambach has lived in her house on Lewis Street since John F. Kennedy was president.

"I lived here 56 years and it's hard," said Kambach, as she watched an enormous excavator machine used to tear down houses.

"A lot of people are taking the buyout because they are getting good price for their house and we do have problems with the water," she said. Soon she will move out, and her home will be demolished.

Buyouts of flood-prone properties have become a reality in numerous coastal states, as well as inland. New York, Texas, Louisiana, Indiana, Wisconsin, Iowa, North Dakota and others have programs.

But Superstorm Sandy in 2012 opened the eyes of people in low-lying New Jersey towns like Woodbridge to the dangers of rising waters.

The goal of the state buyout program, Blue Acres, is twofold: To remove people and property from the danger of future floods, and to use the vacant land left behind as a buffer or sponge to help absorb the water from those floods.

"Typically when we think of a disaster we think of a major storm or catastrophic fire -- something that happens really quickly," said Rutgers University biologist Brooke Maslo. "Climate change is a disaster; it's just that it is happening in slow motion."

On a recent morning, Maslo tended to a series of plastic tubes that protect and nourish tree seedlings in the footprints of homes where just a few years ago people raised families and grew old. After those houses were torn down, she designed the area into a flood plain forest of native trees, shrubs and grass.

"The idea is first and foremost to move people to higher ground, to protect human health and safety," she said. "The second part of the process is to increase the resiliency for the remaining houses."

Blue Acres has so far lined up funding to buy 1,156 properties statewide. It has made offers on nearly 1,000 homes, closed deals on more than 700, and knocked down more than 640 in flood-danger areas across New Jersey, according to Larry Hajna, a spokesman for the state Department of Environmental Protection.

But none of the buyouts has happened along the ocean, where the damage from Sandy was catastrophic. The reason is simple: That land is simply too valuable; no property owners have thus far signed up for the buyout program, which is strictly voluntary.

Jeff Tittel, director of the New Jersey Sierra Club, said Blue Acres has done some good in places like Woodbridge, which suffered regular flooding from a nearby river and creek, exacerbated by storm surge during hurricanes. But he said it needs to be expanded to other areas.

"We need the same success and program along the shore to get people and their properties out of harm's way," he said.

In places like Woodbridge, the Blue Acres program has thrown a lifeline to people who might have trouble selling their homes otherwise. Tall chain-link fences surround homes that are slated for demolition. Christmas decorations have been lovingly placed on other homes nearby.

But not everyone wants to sell. The state gave Jeff Colgan, 66, a Blue Acres application to sell the home where he's lived for 25 years with his wife. But he decided not to apply for a buyout.

"You can't worry about 2050 right now," said Colgan, after adjusting the Christmas wreath on his front door as the crunching sound of demolition came from half a block away. "It's just sad to see the houses go and not having the opportunity for other people to move in."

Johanna Larsen, 73, lives a block away in her home of 50 years. Several houses across the street have been bought and will soon be demolished.

"I guess once they get knocked down I don't know what's going to happen afterwards, how far the water is going to come here," she said, taking a break from blowing leaves away from the Virgin Mary statue in her front yard. "For some reason, I think the homes there probably stopped a lot of the water coming on our side."

Maslo, the Rutgers biologist, has a broader perspective on the transformation of a neighbourhood.

"We've labeled this as a coastal retreat," she said. "We don't like as humans or Americans to retreat; that almost suggests defeat. What we need to start realizing is that climate change is about adaptation."