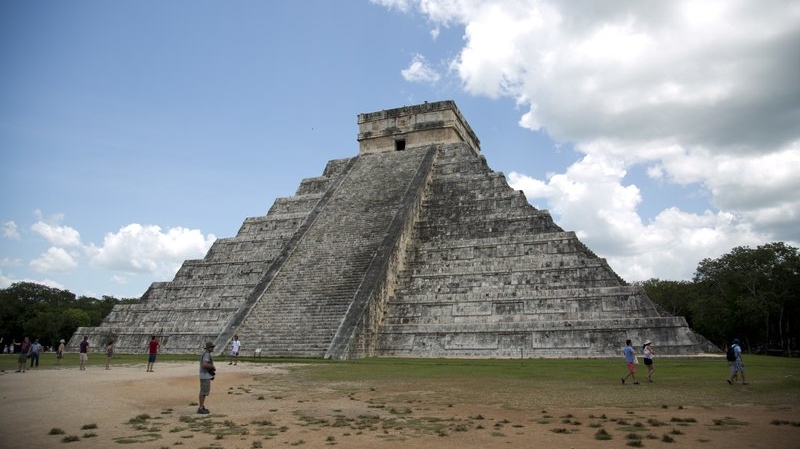 In this Aug. 3, 2018 file photo, tourists walk at the Mayan ruins of Chichen Itza in Mexico's Yucatan Peninsula. Experts in Mexico said Wednesday, Oct. 14, 2020, that they have detected more than 2,000 pre-Hispanic ruins or clusters of artefacts along the proposed route of the president's controversial Maya Train project on the Yucatan peninsula. (AP Photo/Eduardo Verdugo)

Archaeologists say they have discovered hundreds of Mayan artifacts, including ceramic vessels and burial sites, along the route of a train construction project in Mexico's Yucatan Peninsula.

Researchers have so far discovered nearly 2,500 pre-Hispanic structures, 80 burial sites and thousands of vessels and fragments along the route of the "Maya Train," Mexico's National Institute of Anthropology and History (INAH) announced in a statement Thursday.

The artifacts were discovered with the help of GPS georeferencing, satellite topographic images and LIDAR sensors in the periphery of just one of the sections of the project, which runs from the cities of Palenque, in Chiapas to Escárcega, in Campeche.

"Both the immovable archaeological artifacts and the movable ones expand the knowledge about daily life, and trade and cultural exchange relations that existed centuries ago in the Mayan area," the researchers said.

Some objects "of special interest" for researchers include "an offering composed of a bowl and a spout vessel, both with four mammiform supports -- representing the breasts of a woman," which date from the transition from Pre-Classic to Classic periods, known as Protoclassic, INAH said.

Archaeologists believe the vessels were used by the ruling elite during "important political or religious moments," and the pouring vessel was likely to have been used for precious liquids such as chocolate and perfumes.

Preliminary analysis indicated the Maya had inhabited the area for a long time, from the Middle Preclassic Period -- which began in 700 BC -- to as late as 850 AD, the end of the Late Classic Period.

Another area of interest for researchers is the Boca del Cerro area, located on the banks of the Usumacinta River, which was part of a large residential area associated with a key commercial hub that connected regions along the Usumacinta and other parts of Mesoamerica.

"The construction of the Mayan Train constitutes an important research opportunity, through archaeological recovery, with a view to expanding the knowledge about the archaeological sites of the regions that the train will travel through," researchers said.

However, critics of the train project, which is intended to connect beach resorts and the peninsula's interior, say it will damage the environment and potentially harm other archeological sites.

President Andrés Manuel López Obrador has insisted that construction of the project, which will run through five states, will be conducted in a way that is safe for the environment and will benefit tourism.