Human genome of Pompeii victim sequenced for the first time 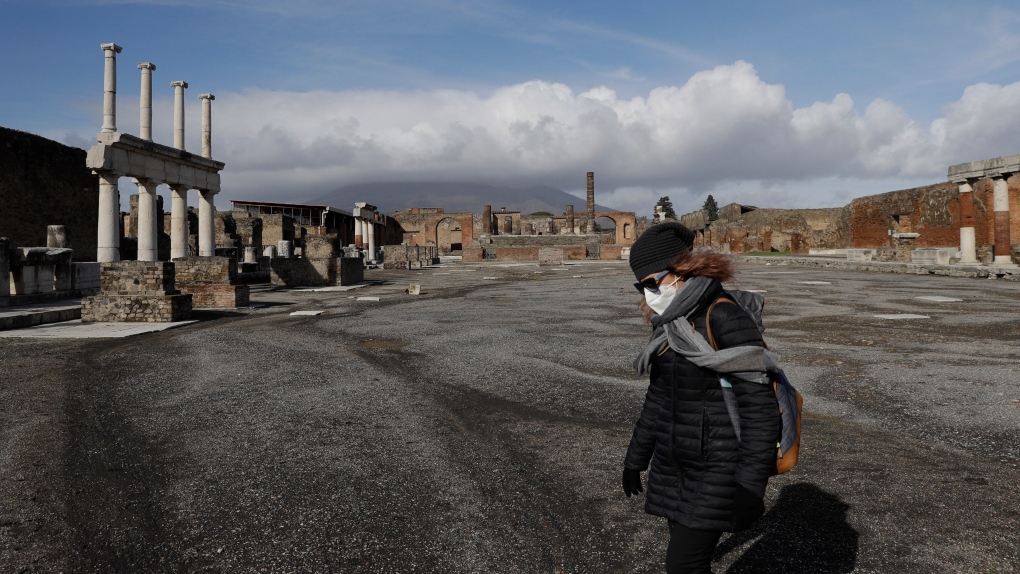 Clouds hang over the Vesuvius volcano, background, as a woman walks in the Forum of the archeological site of Pompeii, southern Italy, during the inauguration of the museum Antiquarium, Monday, Jan. 25, 2021. (AP Photo/Gregorio Borgia)

Scientists have successfully sequenced the genome of a man who died after the eruption of Mount Vesuvius in 79 AD for the first time.

Researchers studied the remains of two individuals found in a building known as the House of the Craftsman, a dwelling in the densely populated center of Pompeii, and distilled their DNA, according to a study published Thursday in the Scientific Reports journal.

Pompeii was home to up to 20,000 people before it was destroyed in the eruption, which was visible from more than 40 kilometers (25 miles) away. More than 2,000 people died as a direct consequence. The city was buried under a 23-foot-deep layer of ash and debris after the volcanic explosion, which preserved the ruins from the damaging effects of weather and climate. It has since become a popular tourist destination, as well as a rich site of study for archaeologists.

The structure, form and length of both skeletons suggest that one set of remains belonged to a man who was aged between 35 and 40 when he died, whereas the other skeletal remains came from a 50-year-old woman.

While scientists could obtain ancient DNA from both individuals, they were only able to sequence the entire genome from the man's remains because there were gaps in the sequences extracted from the woman's remains.

"Pompeii is one of the most unique and remarkable archaeological sites on the planet, and it is one of the reasons that we know so much about the classical world. To be able to work and contribute in adding more knowledge about this unique place is unbelievable," Gabriele Scorrano, an assistant professor in the department of health and medical sciences at the University of Copenhagen and a lead author of the study, told CNN over email.

Pompeii is one of the world's most intensively studied archaeological sites, but getting detailed genetic information from the skeletal remains preserved in Pompeii had long eluded scientists.

Before this latest study only short stretches of mitochondrial DNA from human and animal remains from Pompeii had been sequenced, a news release announcing the study said.

Scorrano said it may have been possible to successfully extract ancient DNA from their samples because pyroclastic materials -- a burning hot mix of gas, lava and debris -- discharged during the eruption may have protected the DNA from environmental factors, such as oxygen in the atmosphere that led to decomposing.

"Individuals in Pompeii were not directly in contact with volcanic lava, but rather were enveloped in volcanic ash," Scorrano said.

He said this created an oxygen-free environment, which helped preserve the DNA in the skeletal remains.

"One of the main drivers of DNA degradation is oxygen (the other being water). Temperature works more as a catalyst, speeding up the process. Therefore, if low oxygen is present, there is a limit of how much DNA degradation can take place," Scorrano added.

Analysis of the genome has shed light on the genetic diversity of the human population that lived on the Italian Peninsula, when Pompeii was destroyed nearly 2,000 years ago.

Scientists compared DNA from the man's remains with that of 1,030 ancient people, and 471 western Eurasian individuals.

Their findings show that he shared similar DNA to modern central Italians and other people who lived in Italy during the Roman imperial age, which took place from 27 BC to 476 AD.

Further analysis of the male individual's mitochondrial DNA, which relates to his matrilineal ancestry, and his Y chromosome, which reflects the male line, also revealed groups of genes that are frequently found in people from Sardinia, but not among other people who resided in Italy during the Roman imperial age.

"It is significant because it shows that there is a lot we still don't know about the genetic diversity at the time of the Roman Empire, and how this impacts modern Italians and other Mediterranean populations," Scorrano said.

Researchers also linked lesions found during analysis of the male individual's skeleton and DNA to mycobacterium -- the type of bacteria that is linked to tuberculosis, which suggests that he suffered from this disease before his death.

"To take part in a study like this was a great privilege, Pompeii is a unique context in all points of view, the anthropological one allows one to study a human community involved in a natural disaster," Scorrano said.

A Russian airstrike on residential areas killed at least 21 people early Friday near the Ukrainian port of Odesa, authorities reported, a day after the withdrawal of Moscow's forces from an island in the Black Sea had seemed to ease the threat to the city.

The World Health Organization's Europe chief warned Friday that monkeypox cases in the region have tripled in the last two weeks and urged countries to do more to ensure the previously rare disease does not become entrenched on the continent.

One of Toronto’s Canada Day fireworks displays has been cancelled and another has been postponed after a vendor pulled out at the last minute.