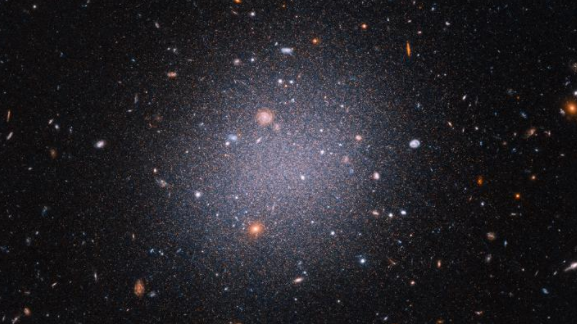 TORONTO -- Data from the Hubble telescope has confirmed the existence of galaxies without dark matter, once thought to be an essential part of the celestial body’s makeup, a new study suggests.

The study, published in the June volume of Astrophysical Journal Letters, is based on 40 orbits of NASA’s Hubble Space Telescope and imaging from the Advanced Camera for Surveys which showed that the ultra-diffuse galaxy (UDG) known as “NGC1052-DF2” or “DF2” is lacking dark matter.

Dark matter, composed of particles that do not absorb, reflect or emit light, is widely considered to be an essential ingredient of galaxies. While dark matter cannot be seen directly, its gravitational force is like a glue that holds galaxies together, and governs the motion of matter that can be observed directly.

In 2018 Researchers had previously been working to measure the distance between DF2 and its neighbour UDG NGC1052-DF4 (DF4) which found “surface brightness fluctuations,” denoting compelling evidence of a lack of dark matter, according to a release.

DF2 and DF4 were found to have a large amount of very bright clusters of stars and are comparable in size to the Milky Way galaxy, but their total mass is only about one per cent of the Milky Way’s mass.

"Determining an accurate distance to DF2 has been key in supporting our earlier results," said researcher Shany Danieli in the release. "The new measurement reported in this study has crucial implications for estimating the physical properties of the galaxy, thus confirming its lack of dark matter."

The Hubble data also indicated that the galaxies were located slightly farther away than previously thought, supporting the idea they contain little to no dark matter. If DF2 was closer to Earth, the release states, it would be fainter and smaller.

"We went out on a limb with our initial Hubble observations of this galaxy in 2018," said Yale researcher Peter van Dokkum in the release. "I think people were right to question it because it's such an unusual result. It would be nice if there were a simple explanation, like a wrong distance. But I think it's more fun and more interesting if it actually is a weird galaxy."

Researchers plan to continue studying how ultra-diffuse galaxies are formed and what other unique properties they possess.