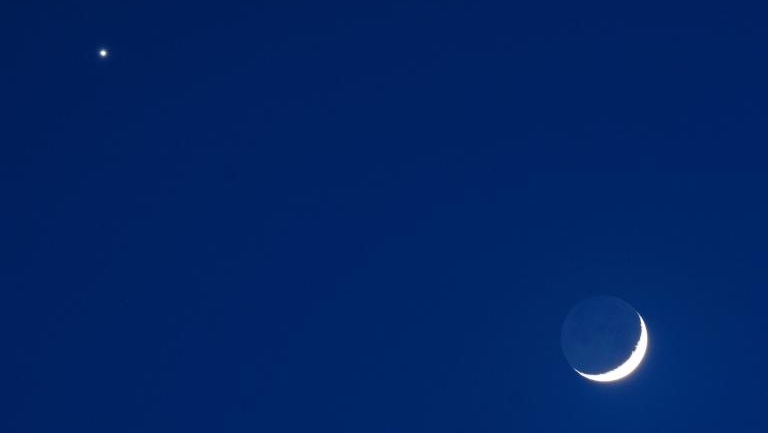 From the Northern Hemisphere perspective, the bright planet Venus will appear next to a crescent moon Thursday night, February 27, 2020. (Ovidio Gonzalez/Getty Images)

A celestial phenomenon is set to occur between Venus and the moon Thursday night, according to NASA's calendar.

If you live in the Northern Hemisphere and you've got a clear sky Thursday, look to the southwest and you'll see a very bright Venus alongside a crescent moon, together two of the brightest objects in the night sky.

Why Venus is so bright

Venus, also known as the "evening star," is the third brightest object in the sky after the sun and the moon.

The planet is as bright as it is because of a characteristic called "albedo," which astronomers use to describe how bright a planet is by specific measurements, according to EarthSky, a website by scientists providing updates on events of the cosmos. When sunlight hits a planet, some of the light is absorbed by the planet's surface or atmosphere, and some is reflected.

Albedo is a comparison between the sunlight that strikes an object and how much of it is reflected. The albedo of Venus is close to .7, meaning its thick cloud covering reflects about 70% of the light striking it back into space. Venus is also the Earth's closest neighbor in the solar system as it's the planet next-inward from Earth in the orbit around the sun.

Why we'll see a crescent moon

The moon takes 29.5 days to orbit the Earth. The waxing crescent moon we'll see Thursday night comes after the new moon we just saw on Sunday, February 23 -- meaning the visible side of the moon was between the Earth and the Sun, so we couldn't see it.

But as the moon moves away from that position on its journey around the Earth, we're gradually able to see the side of the moon illuminated by the sun -- a waxing crescent moon visible in the western sky for a few days while on its way to becoming full again.

Why they're meeting and how you can see it

We're currently in the middle of an "evening apparition" of Venus, which is the period of time during which the planet climbs higher in the sky until it reaches its greatest separation from the sun.

When a planet is at its greatest elongation is when it appears farthest from the sun as seen from Earth, so its appearance is also best at that point. Venus is expected to reach its maximum elongation for the year in the east of the evening sky by March 24, 2020, according to EarthSky. On this night, Venus will stay out for a maximum amount of time after sunset.

The planets and the moon follow roughly the same path through the sky, which is called the ecliptic. The ecliptic is the plane of the solar system on which all the planets orbit the sun, and the moon travels nearby. The moon and planets occasionally appear to pass closely by each other in the night sky.

In reality, Venus will actually be about 84 million miles from Earth on February 27, while the moon is nearly 250,000 miles away. But our Earthly perspective will still make for a seemingly close sighting.

As long as the weather is clear, those who live in the Northern hemisphere can see the meeting between the crescent moon and Venus by heading outdoors after sunset and looking to the southwest horizon. Below the constellation Aries, you should see the crescent moon below and to the side of Venus.

If you miss it tonight, you won't have to wait long before a similar phenomenon occurs in the last days of March.