How forecasters deal with 'spaghetti' of hurricane scenarios 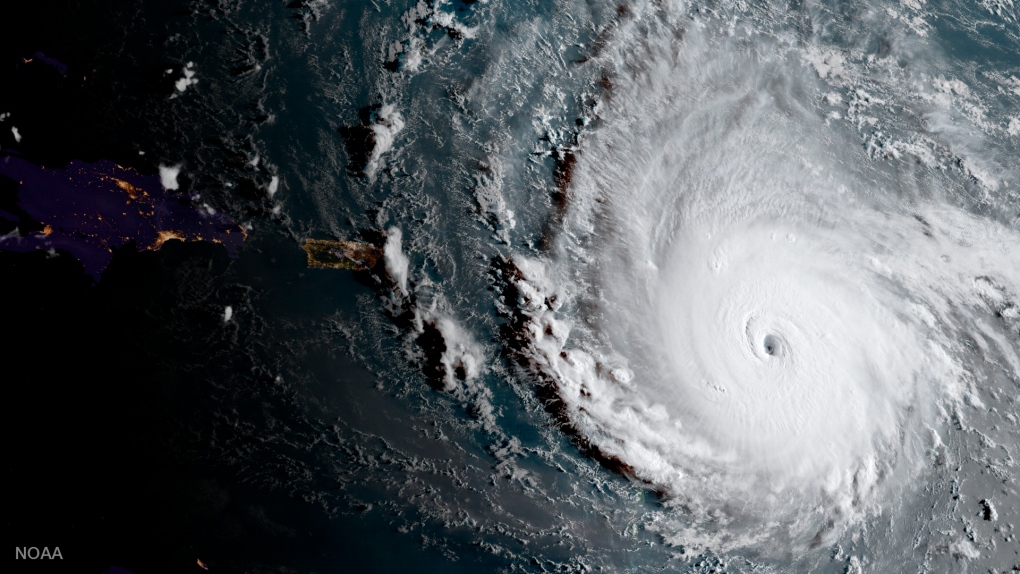 In this geocolor image captured by GOES-16 and released by the National Oceanic and Atmospheric Administration (NOAA), Hurricane Irma, a potentially catastrophic category 5 hurricane, moves westward, Tuesday morning, Sept. 5, 2017, in the Atlantic Ocean toward the Leeward Islands. (NOAA via AP)

WASHINGTON -- Hurricane Irma, with its record strong winds, is lashing the Caribbean but where will it go from there?

Forecasters turn to computer simulations to try to predict a storm's path and how strong it will be.

So the resulting models look like a plate of spaghetti thrown on a map. But in that messy mass, meteorologists can get an increasingly strong idea of where a storm like Irma is heading.

A look at how those predictions are made:

The hurricane centre sees computer models other people don't, judges individual models and uses a consensus of the better performing models, he said. The centre also shows how well they do over time -- and they are doing better. The trouble, say those experts, is that those same images of models are spreading over social media and they are getting misread. There are even bogus hurricane tracks spreading on social media.

HOW GOOD ARE THE PREDICTIONS

Forecasters track the beginnings of storms, whether they come out of unstable weather that pops up in the Gulf of Mexico, or chug off Africa in classic Atlantic storm mode like Irma. The models usually agree about where the storm will go for the next 12 to 24 hours and the spread out with time.

Today, the five-day forecast is as good as the three-day forecast was 15 years ago. And the margin of error for the five-day track forecast is nearly half of what it was when it was first introduced in 2001. What's key is that meteorologists don't stick to a single line or track because a slight change can mean a big difference, Mayfield said. For example, a tiny turn over Cuba, where mountains can eat up storms, can weaken Irma considerably.

WHAT GOES INTO A MODEL

Computer models are like massive apps that try to solve complex equations that simulate the behaviour of the atmosphere and oceans, said MIT meteorology professor Kerry Emanuel. Usually they don't go much farther out in time than five days, and if they do, it's with decreasing accuracy. They use real-time readings of wind, temperature, air pressure, humidity and more. But those real-time readings are sparse and spread out over the open Atlantic.

Sometimes the models point to the same general conclusion, like Superstorm Sandy hitting the New York-New Jersey area. The models did well about five days out in 2012, said Emanuel. Sometimes they are all over the place. This time they are in between, not widespread but not clustered, he said.

The top performing model is usually the European model, which is slightly ahead in long-term accuracy over the American one, Emanuel said. But that doesn't mean the European will be better every time, he said.

And sometimes one model is just nailing a certain storm so you stay with the hot model.

Forecasters also run so-called ensembles with as many as 51 tweaks to the data and formulas. They are lower resolution and quality but provide more information and possibilities for forecasters.

WHAT SHOULD YOU LOOK FOR

"The best guide for risk is to look at the cone" of projected landfall, often called the "cone of uncertainty," said Jeff Masters, meteorology director at the private forecasting service Weather Underground. If you are in the cone, you should be concerned and prepared, he said. Even if you aren't in the cone but nearby, you need to pay attention.

The trouble is with the spaghetti of models, people focus too intently on one line, Masters said. The hurricane centre cone only goes out five days -- and people want to know if they are in danger earlier, Masters said. So that's when they turn to the longer range models even if it is beyond that cone.

'This is a buzz saw': Florida braces for Hurricane Irma

How forecasters deal with 'spaghetti' of hurricane scenarios