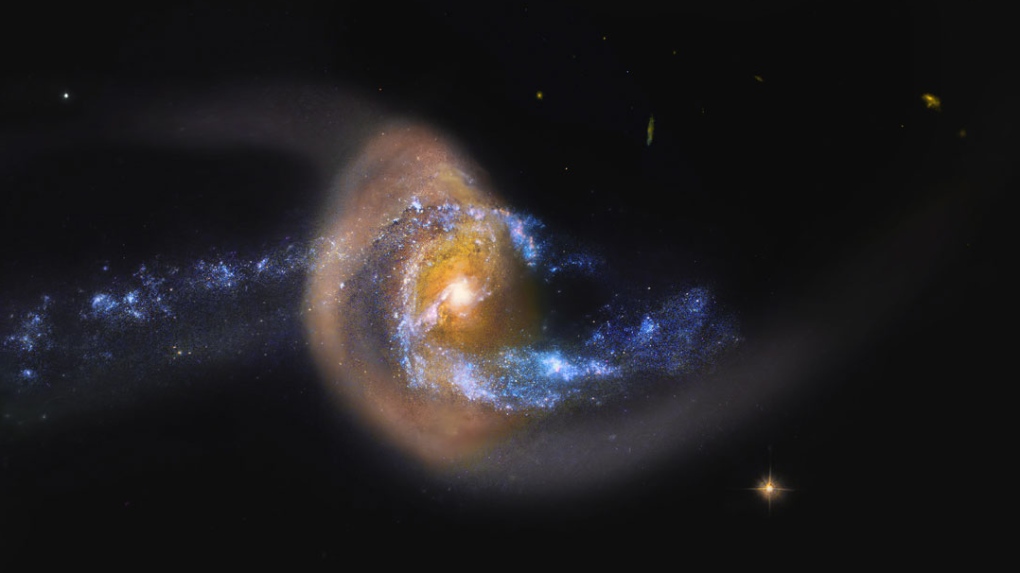 An Ottawa astrophotographer who has been fascinated with space for years has earned recognition from NASA scientists for a dramatic image of the aftermath of two galaxies colliding.

In the photo, what looks like a pale but fiery strip of orange curls around a blue and purple swirl of stars. The two forms meet in a bright flare in the middle, creating the impression, as NASA’s Astronomy Picture of the Day description puts it, that “this galaxy is jumping through a giant ring of stars.”

Rudy Pohl, the Ottawa man behind the processing of the image, said that “there’s a gravitational force that has been set up between them, sort of pulling it apart,” though he was quick to add that he was not an astronomer himself.

In a phone interview with CTVNews.ca, Pohl said he was thrilled to have his photo chosen by NASA’s Astronomy Picture of the Day -- his second image since he started submitting to NASA.

“It's really extraordinary to get one of those,” he said. “Hundreds of images get submitted every day to NASA for this.”

Astronomy Picture of the Day has been running since 1995, and each photo comes with an explanation of the image, provided by a professional astronomer.

Although it appears as though two galaxies are wrestling in front of our eyes, both the blue and orange arms in the picture are all part of the same galaxy: NGC 7714.

According to the description, the image shows how NGC 7714 has been “stretched and distorted by a recent collision,” with NGC 7715, a smaller, neighboring galaxy, that is off to the left out of the frame of the image.

The ring of golden light in the image is made up of millions of older stars thought to be similar to our sun, the description says, while the bright centre of NGC 7714 is the nexus of a new star formation for the galaxy.

You’d never guess it, looking at the vibrant colours in the picture, but this image started out life as a series of black and white photos taken by NASA’s Hubble telescope.

It took hours of work to process the image, but it was work that Pohl, 69, was happy to do.

Pohl is part of an online community of astrophotographers who create stunning colour photographs of space. Although some have their own telescopes and equipment to take photos of the sky themselves, others rely on free archives, such as the Hubble Legacy Archive, to find the source images to create their masterpieces.

If the source images are black and white, does that mean those who process the images are choosing colours at random?

Not according to Pohl. The colour clues are in the filters used by Hubble, he said.

“What they do is they put a colored filter in front of that black and white camera. In this case there are three colors, red, green, and blue. It's called RGB imaging. It's the same imaging as in our computer monitors and in our televisions,” he explained.

“So the Hubble camera first puts a red filter in front of it, which means it blocks out everything but the red, and so the red wavelength hits the camera and you get an image.”

Although the image still comes out looking black and white, it is effectively a picture of what the galaxy would look like if it was composed of only red light.

The process is repeated with blue filters and green filters, Pohl said, producing numerous images that -- while technically greyscale images -- contain a massive amount of information regarding where different wavelengths of light, and thus different colours, are concentrated in the image.

Astrophotographers take these different greyscale images and fill them with colour corresponding to the filter they were taken with, so they end up with numerous red, blue, and green layers of the same deep space object. When they line the different images up on top of each other, that’s when the real picture of a galaxy, star or nebula starts to form.

It takes a lot of processing and refining of the different layers to filter out the noise in the images and produce a final photo that looks as crystal clear as Pohl’s picture of NGC 7714. Pohl said it can take anywhere from 12 to 16 hours to finish an image.

He used to have his own telescopes and equipment to image the heavens with, but when chronic illness advanced on him, he said he had to sell his gear.

Working with public archives of space images allowed him to hold onto his passion.

A love of science is something that has informed almost his entire life. Pohl got his undergraduate degree in molecular genetics at Carleton University, and met his wife while he was at it, who was also studying science. He only started posting astrophotography pictures within the last few years, but he's not slowing down now.

“I'm going to be doing it for the rest of my life now,” he said. “I am so blown away, like when I think of the vastness of space.”

NGC 7714 is around 100 million light years away from Earth, which makes it a relatively close cosmic neighbor.

According to APOD, NGC 7714 and NGC 7715 first started interacting around 150 million years ago, and are expected to continue for several hundred million years more, possibly resulting in the two combining into a single galaxy.