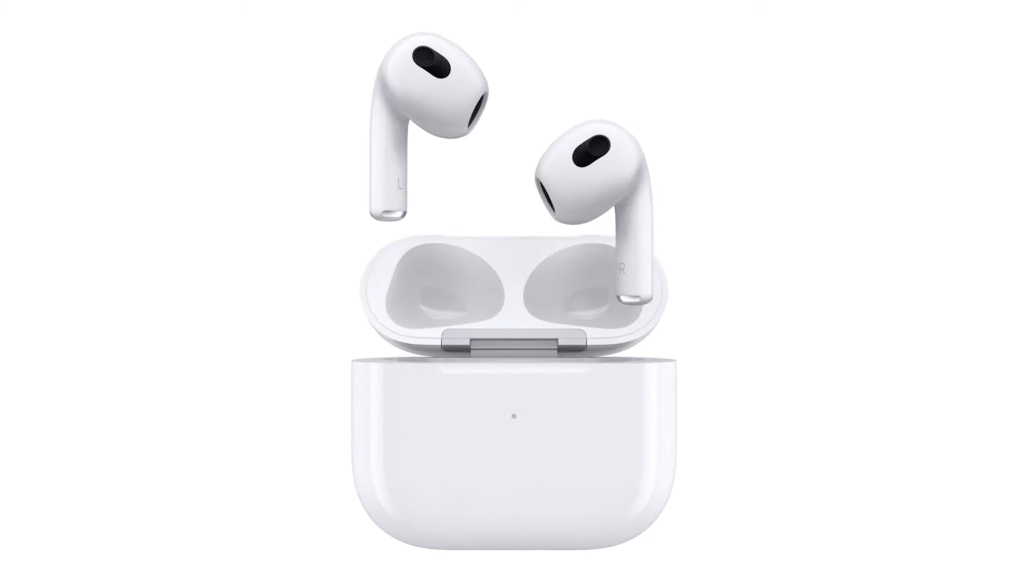 Apple's AirPods have emerged as a surprise status symbol and a hit for the company. (Apple)

Almost immediately after Apple unveiled its new AirPods product in 2016, the memes began. There were photoshopped pictures of electric toothbrushes dangling from ears and jokes about the wireless earbuds resembling miniature hair dryers, oversized plastic earrings and Snoopy.

But over the years, AirPods have emerged as a surprise status symbol and a hit for the company. Customers line up outside Apple stores on AirPods launch dates as they do for new iPhones. NBA players began wearing them before games on their "runway" walks to the locker room. Olympic skateboarder Jagger Eaton wore a pair during an event in Tokyo this summer (he took home a bronze medal). There are AirPod cuffs that clasp to ears, jewelry that clips onto the stems and expensive designer cases from Prada, Louis Vuitton and Coach. And AirPods can be found everywhere: in ears at Starbucks, airports and more recently, on Zoom and WebEx calls during the pandemic.

So perhaps it shouldn't be surprising that at Apple's fall product event on Monday, which had been widely framed in the press as a MacBook event, it was arguably the AirPods that stole the show.

For the first time in two years, Apple updated the AirPods line. The US$179 AirPods 3 promise spatial audio, better sound quality, longer-lasting battery, a new contour design and customizable sound that adapts to what the ear is hearing, a feature already available on Apple's higher-end AirPods Pro line. They also come with shorter stems and without the plastic tips found on their predecessors, small tweaks that highlight how the once ridiculed design continues to change.

Crucially, Apple also cut the price of the second-generation AirPods to $129, which could help the company attract more customers and compete with a growing number of similar products from the likes of Amazon, Google and Samsung.

Dan Ives, an analyst at Wedbush, said AirPods could represent about 5% of Apple's total revenue this year and he predicts it will likely grow by 20% by 2022 due largely to the new model and the cheaper AirPods 2. He estimates Apple will sell 100 million units by next year.

The "company has turned this into a $20 billion annual business, a major feather in the cap for Apple," Ives told CNN Business.

Apple doesn't break out sales figures for the earbuds, but AirPods and Apple Watch -- arguably the two most successful new hardware products of Tim Cook's tenure as CEO -- are key parts of the company's Wearables, Home and Accessories division, which now collectively brings in more revenue than the Mac division many quarters.

Part of the appeal is that AirPods work seamlessly. Like many Apple products, they come with minimal set-up, are intuitive to use, pair easily to Apple's other devices and are well designed. Apple also removed the 3.5-inch headset jack from its iPhone 7 in 2016 -- a controversial move that angered some customers but also later pushed people toward wireless earbuds and headphones.

"Apple has pulled off a masterstroke by taking items out of the iPhone box ... so then users are guided towards the purchase of additional premium priced accessories," said David McQueen, research director at market research firm ABI Research. "Apple is basically saying, these are aspirational products, and if you can afford to spend around $1,000 on a phone you can spend another few hundred dollars or so on our accessories."

By lowering the entry-level price for AirPods, Apple is once again betting on the winning strategy it has used for products like the iPhone and Apple Watch, often referred to as the good, better, best model. In addition to the AirPods 2 and AirPods 3, its premium AirPods Pro costs $259 and Apple's over-the-ear headset, the AirPods Max, sells for $550. Offering a range not only encourages more customers to purchase Apple products but allows them to fall deeper into its device and app ecosystem, according to Ramon Llamas, director at market research firm IDC.

"Because [AirPods] are so engrained into the Apple ecosystem with Apple Music and Apple Fitness+, Apple loyalists -- of which there are millions -- prefer to stay with the Apple brand instead of considering another brand," Llamas said.