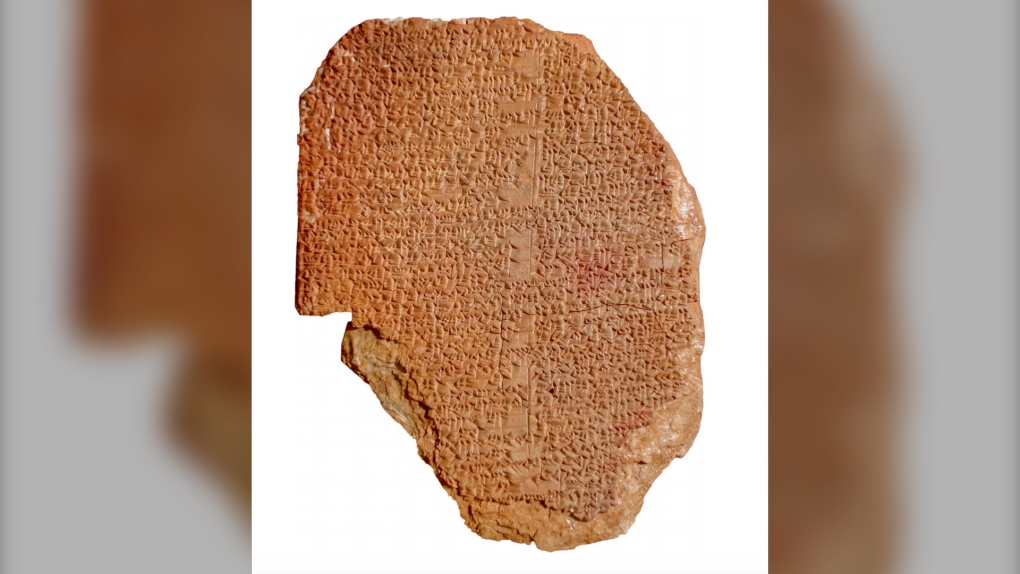 A New York federal court has ordered U.S. craft store Hobby Lobby to forfeit an ancient artifact purchased at a 2014 auction that 'originated in the area of modern-day Iraq and entered the United States contrary to federal law,' the Justice Department announced on July 27. (Mandatory Credit: The Department of Justice)

A New York federal court has ordered U.S. craft store Hobby Lobby to forfeit an ancient artifact purchased at a 2014 auction that "originated in the area of modern-day Iraq and entered the United States contrary to federal law," the Justice Department announced Tuesday.

The artifact -- known as the Gilgamesh Dream Tablet -- is inscribed with a portion of "Gilgamesh," an epic poem considered one of the world's oldest works of literature. In 2014, Hobby Lobby, a privately owned arts and crafts retailer whose president is also the chairman of the Museum of the Bible in Washington, DC, bought the clay tablet for display in the museum from an international auction house for $1,674,000.

The museum and Hobby Lobby both asked the auction house about the tablet's origin, but the auction house withheld that information and lied in saying that the antiquities dealer had confirmed the details of provenance, according to the Justice Department, which has sought to return to artifact to Iraq. Law enforcement agents seized the tablet from the museum in 2019.

The Museum of the Bible has expressed its support for the government's effort to return the artifact to Iraq.

Christie's, the international auction house from which Hobby Lobby bought the item, previously told CNN that "any suggestion that Christie's had knowledge of the original fraud or illegal importation is unsubstantiated."

Assistant Attorney General Kenneth A. Polite said in a statement Tuesday that "thwarting trade in smuggled goods by seizing and forfeiting an ancient artifact shows the department's dedication to using all available tools, including forfeiture, to ensure justice."

That message was echoed by acting U.S. Attorney for the Eastern District of New York Jacquelyn Kasulis, who said the forfeiture represents "an important milestone on the path to returning this rare and ancient masterpiece of world literature to its country of origin."

Hobby Lobby previously agreed to forfeit thousands of artifacts from Iraq and pay a US$3 million fine in 2017 to resolve a civil action the Justice Department brought against it.

In 2018, those 3,800 ancient artifacts, including cuneiform tablets, were returned to Iraq after they had been falsely labeled as "tile samples" and illegally smuggled to Hobby Lobby, according to U.S. Immigration and Customs Enforcement and the Justice Department.