Hippo that wandered into swimming pool dies during rescue operation 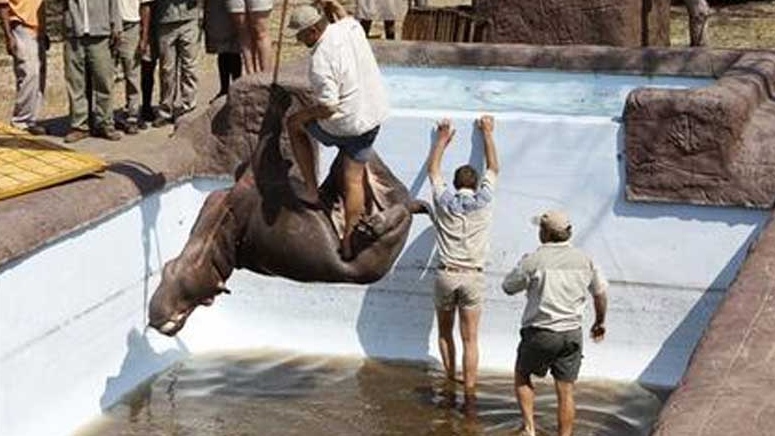 A hippo is lifted from a swimming pool Friday Aug. 24, 2012, at the Monate Conservation Lodge, near Modimolle, South Africa, after being trapped there for three days. The young hippo had plunged into the deep pool on Tuesday after being chased off from his herd by male members seeking dominance, wandered into the lodge's camp and fell into the pool. The animal died just before the rescue operation got under way. (AP Photo/Denis Farrell)

MODIMOLLE, South Africa -- A hippo who wandered into a swimming pool at a South African game lodge three days ago died Friday before a rescue team could pull him out with a crane, a cruel blow to many across this country who hoped the animal would be saved.

In a country still reeling from last week's mine violence leaving dozens of strikers dead, the plight of the hippopotamus called Solly captivated South African media with live TV broadcasts from the game lodge and newspaper headlines like "It's all systems go for the rescue of Solly the hippo." His death left several of those involved pointing fingers of blame.

Monate Conservation Lodge manager Ruby Ferreira said a game capture team had been waiting for a veterinarian to show up since Thursday before hoisting out the heavy hippo with a crane. Late Thursday, it seemed a rescue for the wayward hippo could be carried off. Someone even set up a Twitter account on behalf of the hippo and tweeted purported hippo quotes.

"It started out as a happy story and now it's a tragic story. It's devastating," Ferreira said.

The vet didn't arrive until late Friday morning, and when he did and saw that he had come too late he tried to blame the media, saying they created pressure for a rescue attempt on Friday instead of waiting for the hippo to gather strength by being fed. But the vet also said he couldn't have saved the animal anyway because of the aggravated stress experienced ever since the hippo had been fighting for a position in his herd.

The hippo, which was around 4 years old, had plunged into the deep pool on Tuesday after being chased away from his herd by male members seeking dominance, but he could not get out of the pool -- which had no steps -- on his own.

"He was not as perky this morning, more agitated, like he was irritated. I think because he wanted to get out of the pool. That's my personal opinion," said Ferreira. "We've been waiting for the vets and I think they were just a bit too late."

Just when the veterinarian, Dr. Alex Lewis, arrived at the lodge near Modimolle, a small town north of Johannesburg, the hippo tried one last time to get on his feet. He couldn't make it. Exhausted, Solly dropped his head into the knee-deep dirty water, making a splash. And then he lay absolutely still.

Wildlife rescue expert Simon Prinsloo was in tears as he confirmed to The Associated Press that Solly was dead. Only minutes earlier, Prinsloo had been pouring water from a hose onto the hippo in the warm and humid climate.

A wildlife activist cried as a crane lifted Solly's lifeless body, with the vet standing on it, into an orange animal trailer.

Ferreira said hippos are sensitive creatures and Solly was no different. His stress level had probably been rising since being forced from his group, called a pod, resulting in him taking shelter in the pool, said Ferreira. Once in the 2.4 metre (8 foot) deep pool he could not get out, likely adding to his stress.

"It all just added up and added up," Ferreira said.

Workers had drained most of the water from the pool to prepare for the rescue, and planned to give the hippo a tranquilizer before the hoist operation.

Since early Friday morning, Solly had been staying underwater, occasionally coming up for air and sighing anxiously as he gazed at the group of journalists gathering around the pool.

Dr. Alex Lewis, the veterinarian handling the case, arrived at, late Friday morning. Lewis was expected to help with the rescue the day before, but couldn't make it. When journalists questioned Lewis about not arriving earlier, he said he couldn't have saved the animal because it was in such poor condition already.

Lewis said he had advised the owners of the lodge to feed the animal in order to make it strong enough for the rescue.

Doreen Cronje, a guest at the lodge taking part in a conference, said during the rescue operation that she had been inquiring about the animal and hoped that the hippo would make it out of the pool safely.

"Especially here in South Africa, we care a lot about our animals," Cronje said.