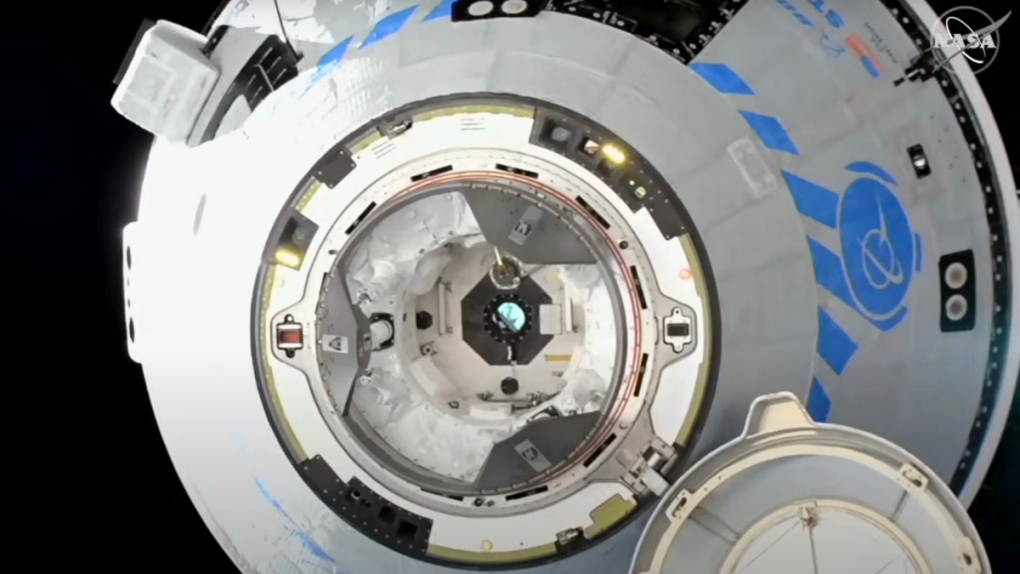 Boeing Starliner preparing to dock at the International Space Station, on May 20, 2022. (NASA via AP)

Boeing managed to dock a spacecraft at the International Space Station late last week, but it was not without several minor hangups.

The mission kicked off Thursday evening with a Florida launch, and the Starliner — which is designed to carry astronauts but is flying without people for this test — docked with the ISS Friday night at 8:28 pm ET. The docking occurred about an hour later than expected as ground crews worked through a few issues, including a software issue that skewed graphics, sort of like a misaligned GPS map. There were also issues with sensors and some docking components that were not initially moving correctly.

The capsule has a docking ring that pops out as it approaches its port and is used to latch on to the ISS. During the first attempt at docking, some components didn't move into the proper configuration. Ground teams had to try the pop-out process a second time to get everything in the right place. There had also been a small problem with the Starliner's cooling loops, which are part of the system that regulates the spacecraft's temperature.

All those issues had to be analyzed or fixed in time for the Starliner to move ahead, and the docking ultimately went off without a major issue.

"It was really nail-biting watching that vehicle sit out there for a while until it was it was time to come in," Mark Nappi, Boeing's Starliner program manager, told reporters Friday night.

Looming over the mission, however, has been several other issues with the spacecraft's on-board thrusters, which manoeuvre and orient that vehicle as it sails through space. Two of those thrusters shut down prematurely shortly after the spacecraft reached orbit. A couple of other thrusters had problems later on.

Despite the setbacks, the spacecraft was performing "beautifully," according to Steve Stich, the manager of NASA's Commercial Crew Program, which oversees Starliner as well as SpaceX's Crew Dragon program.

"Of course this is a test flight, and as those that probably watched throughout the day, you saw that we're learning along the way, and it's very exciting," Stich said on a press call Friday night.

NASA and Boeing officials said that the thruster issues aren't major concerns because the Starliner has "a lot" of built-in backups, Stich said. There are 48 such thrusters on the vehicle, and the capsule's onboard computers can choose to use one thruster over another if it detects anything slightly off.

Although Boeing does want to understand why the thrusters weren't working as planned, according to Nappi, it might not happen.

"We may never know what the real cause of this is," he said.

Engineers narrowed the thruster issues down to "six or seven" possible causes, with three that seemed most likely. Zeroing in on the exact issue may require engineers to see the thrusters in person, something that can't happen because the thrusters are attached to the service module — a part that will be jettisoned and left to burn up in the atmosphere before the Starliner makes its controlled return to Earth.

That's expected to happen in the next few days. The Starliner will undock from the ISS, manoeuvre its way toward home, then use its thrusters to slice back into the thick part of the Earth's atmosphere before parachuting to a landing in the desert of New Mexico.

If all that goes well, it will be massive win for Boeing, which is coming off of years of delays and development hangups with Starliner.

The spacecraft's first attempt at completing an orbital test mission in 2019 had to be returned from space prematurely, without completing an ISS docking, because of software issues. A second attempt to launch Starliner to the ISS in August last year was scrapped after pre-flight checks discovered issues with key valves becoming stuck.

If this mission is completed safely, Boeing's Starliner could launch astronauts by the end of 2022.