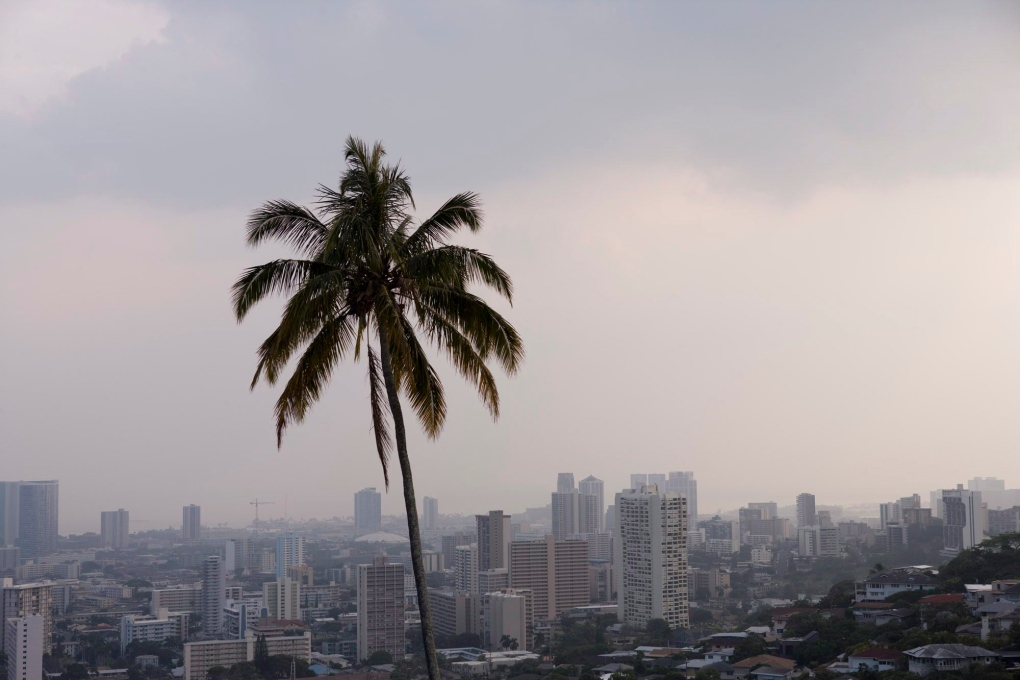 A palm tree stands out against the Honolulu skyline in this 2008 file photo. (AP Photo/Marco Garcia)

HONOLULU -- Part of what makes living in Hawaii so pleasant is the gentle breeze. Arriving from the northeast, it's light enough that it is barely noticeable but strong enough to chase away the humidity.

It's a natural draw to the outdoors. It is not uncommon to show up at a house to find its residents relaxing out in the covered porch or in the car port, not their living room, and enjoying the cooling winds -- and a cool drink.

The effects can be seen from the relatively minor, such as residents unaccustomed to the humidity complaining about the weather and having to use their fans and air conditioning more often, to the more consequential, including winds being too weak to blow away volcanic smog.

The winds also help bring the rains, and their decline means less water. It's one reason officials are moving to restore the health of the mountainous forests that hold the state's water supply and encourage water conservation. Scholars are studying ways for farmers to plant crops differently.

It's not clear what's behind the shift in the winds.

"People always try to ask me: 'Is this caused by global warming?' But I have no idea," said University of Hawaii at Manoa meteorologist Pao-shin Chu, who began to wonder a few years ago about the winds becoming less steady and more intermittent.

Chu suggested a graduate student look into it. The resulting study, published last fall in the Journal of Geophysical Research, showed a decades-long decline, including a 28 per cent drop in northeast trade wind days at Honolulu's airport since the early 1970s.

The scientists used wind data from four airports and four ocean buoys as well as statistical data analysis for their study. Now, they are working to project future trade winds using the most recent data from the Intergovernmental Panel on Climate Change, a scientific body of the United Nations.

Luke Evslin is already noticing the dip. The 28-year-old has paddled outrigger canoes -- boats long used around the Pacific for fishing, travel and racing -- for most of his life. In Hawaii, this means he rides waves generated by trade winds. These days, though, there are fewer waves to surf because the winds are arriving less often.

"You show up and the wind is blowing in the wrong direction. So instead of a 3-hour-45-minute race, it turns into a 5 1/2-hour race," Evslin said. "So instead of testing your surfing ability, it's testing your endurance. It's a different type of paddling."

He's thinking he'll now have to start training for races in canals and rivers to better prepare for flat water conditions.

Sometimes the winds are too weak to blow away the volcanic smog, or vog, created by sulfur dioxide erupting from Kilauea volcano on the Big Island, leaving a white or brownish haze hanging over Honolulu. This aggravates asthma and other respiratory problems.

For now, Chu said the most important consequence will be declining rainfall and a drop in the water supply, particularly as Hawaii's population grows and uses more water.

Trade winds deliver rain to Hawaii when clouds carried from the northeast hit mountainous islands built by millions of years of volcanic eruptions. These rains, together with rainfall from winter storms, are the state's primary sources of water.

On Oahu, the rain feeds ground aquifers that supply water to about 950,000 people in Honolulu and surrounding towns.

Barry Usagawa, the water resources program administrator for Honolulu's water utility, said residents are reporting streams near their homes are flowing lower than before.

"What we don't know is if this is truly a downward trend or just the lower leg of a long-term cycle. Is it going to go back up?" he said. The utility has contracted Chu to develop rainfall forecasts to plan for the decades ahead.

The water utility is also encouraging people to fix leaks and buy appliances that use less water to reduce their water consumption. It's developing water recycling facilities so places like golf courses will be irrigated with recycled water. Desalinizing ocean water may also be an option, Usagawa said.

In the meantime, the utility supports efforts to improve the health of Oahu's forests so they can absorb as much rain as they get.

The Legislature this year approved a state budget with $8.5 million for watershed protection steps next fiscal year that include removing invasive weeds and keeping out pigs and other feral animals that dig up forest plants.

The drop in trade winds, along with a separate decline in winter Kona storms, is one reason parts of Hawaii are in drought. Maui, for example, just had the driest April on record.

To cope with the rainfall decline, University of Hawaii at Manoa agriculture professor Ali Fares said farmers can try to grow crops during the rainy reason and avoid months with more uncertainty about water availability.

Farmers could also plant more drought tolerant crops and irrigate when crops are under the most stress. "So many people only talk about drought when there's no water. But it's too late then. We have to talk about these before they happen," Fares said.

The trade wind decline may be too subtle to affect the state's biggest industry, tourism, and keep away any of the 8 million travellers who visit Hawaii each year. After all, even without trade winds, Hawaii's humidity is mild compared to Hong Kong or Tokyo. And the heat here is nothing compared to summer in Texas or Arizona.

"We do have the best weather in the planet. We really do," said Jerome Agrusa, a travel industry management professor at Hawaii Pacific University. "Once you leave to go visit somewhere else, you realize. I go away and I think: 'What did I go for?"'