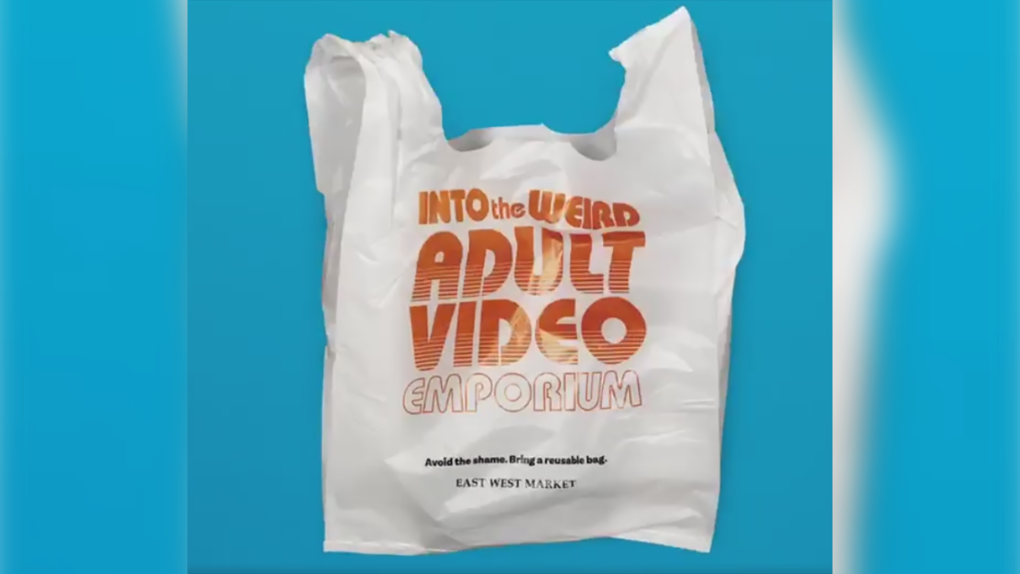 The East West Market in Vancouver has started adorning its plastic bags with names of fake, embarrassing businesses in an effort to steer customers toward reusable options.

Don’t want to advertise that you shopped at “The Colon Care Co-op” or “Into the Weird Adult Video Emporium”?

East West Market launched them earlier this month with the hope that customers would rethink and shun single-use bags. The plastic bags, which cost five cents each, come with the tagline, “Avoid the shame. Bring a reusable bag.”

Store owner David Lee Kwen said about 90 percent of customers are bringing in their own reusable bags now, marking at least a 30 per cent surge just in the last few days.

“We wanted to create a conversation and I think that was accomplished,” Kwen told CTVNews.ca. “It’s actually a year-long project. We’ve been trying to get usage down.”

Cities including Victoria and Montreal have already banned some plastic shopping bags in stores, while many retailers in Toronto and elsewhere similarly charge five cents per bag.

Canadians use nearly 3 billion plastic bags each year, or about 200 for every person, based on figures by Plastic Oceans Foundation Canada. In contrast, shoppers in Denmark use four plastic bags a year on average, according to National Geographic.

Globally, Plastic Oceans says more than a million bags are used every minute. These bags have an average “working life of 15 minutes.”

While many shoppers appreciated East West Market’s message and liked the Facebook posts about its new bags, some posters cheekily questioned its effectiveness.

“Nope this just makes me want to use your plastic bags even more, sorry not sorry, this is awesome,” said one Facebook post.

Kwen said the images are so popular they will transfer them to canvas bags, which he hopes will be available in about a month.

Other Facebook posters were critical, with some pointing to the plastic bags used in products carried by the store.

Kwen said they wouldn’t have anything to sell if they avoided everything that had plastic packaging. “Of course there’s plastic everywhere. What we’re trying to do is tackle one problem at a time.”