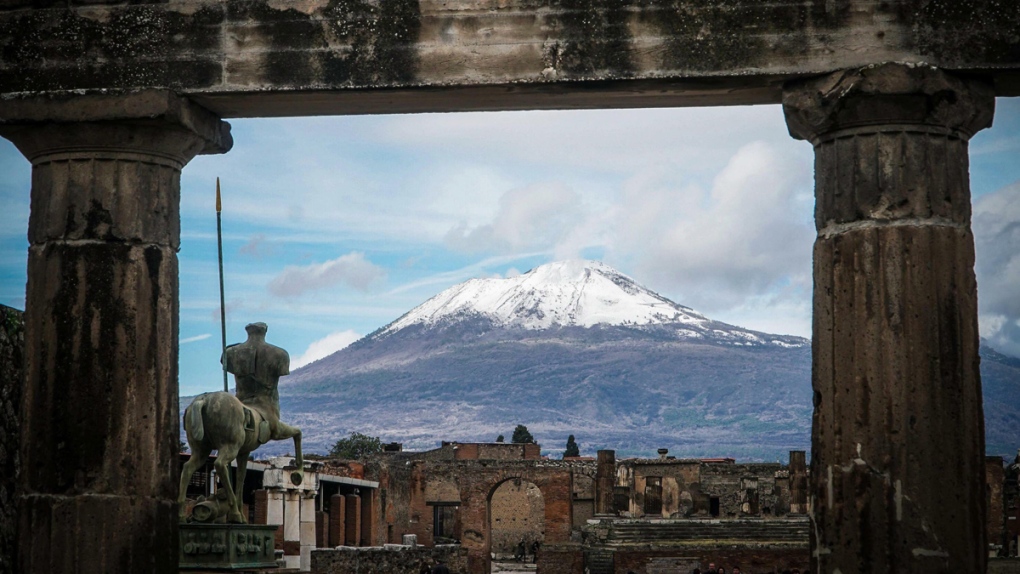 The snow-covered peak of Mount Vesuvius volcano is framed by ancient ruins of the archaeological excavations of Pompeii, Italy, on Jan. 23, 2019. (Cesare Abbate / ANSA via AP)

TORONTO -- New findings from an international archeological research team working in the Roman ruins of Herculaneum have found that some victims of the Mount Vesuvius eruption of 79 A.D. had a slower death than initially believed.

The team, which included applied biological anthropology professor Tim Thompson of Teesside University in the U.K., studied several sets of skeletal remains in coastal stone boat sheds, known as fornici, and published their findings in the February edition of the Antiquity journal.

At least 340 individuals in the fornici -- most of whom were women and children -- were killed by what is known as pyroclastic flow, the fast-moving current of hot gas and volcanic matter from a volcanic eruption that can reach speeds of up to 700 kilometres per hour and temperatures of 1,000 degrees Celsius.

Physical evidence of death by pyroclastic flow includes: bone discolouration from grey-white to black, presence of micro-cracks in the bone, dental enamel cracks, cranial fractures as a result of heat-induced pressure inside the skull and mid-to-high crystallization of bone calcium.

The previous prevailing theory about the deaths stemming from Mount Vesuvius’ eruptions is that individuals “were instantly vapourized,” Thompson said in a phone interview with CTVNews.ca from Middlesbrough, U.K.

However, after Thompson and his team re-examined the Herculaneum fornici victims’ skeletal remains, the structure and remaining collagen in the bones were inconsistent with the vaporization theory.

Thompson, whose research mostly focuses on the effect of burning on bone in both a forensic and archeological context, used two methods of studying the fornici skeletons – collagen extraction and infrared examination of bone crystallization.

Thompson’s team also put the inorganic bone matter into an infrared mass spectrometer, which tells them what materials the bone consists of. That gave them a data set to insert into their prediction model that calculates temperature – and the results were surprising.

“It [the temperature] came out quite low, lower than we expected,” Thompson said. “It surprised us how much collagen we had left over… from the unique environment of the bodies being in the fornici.”

The results suggest the victims were not instantly vapourized, but may have lived long enough to suffocate from the toxic fumes from the pyroclastic flow or were perhaps buried in debris inside the fornici.

“You have people who are hiding, sheltering, in these stone boat houses and there is only one way in or out, so when that pyroclastic material comes down the hill or the sea it is going to cover that up and people would be trapped in there,” Thompson said. “Whether those boathouses fill with debris or ash or don’t, either way you’re stuck in there in a dark, cave environment with the heat increasing as well.”

Thompson said the findings give a more “nuanced” understanding of what happened during the cataclysmic event, and how the volcanic eruption affected different people in different ways.

“What is interesting about Herculaneum is that it was some distance from Vesuvius, which means they saw the eruption and had a chance to try and escape, they all ran down to the beach to get in the boats and escape – although it was futile,” Thompson said.

The results from the tests also have implications in a modern context, Thompson said, citing recent volcanic eruptions and the devastating Australian wildfires.

“These methods really contribute to our understanding of death fire and heat,” he said, adding that he hopes to study more Herculaneum skeletal remains in the future.