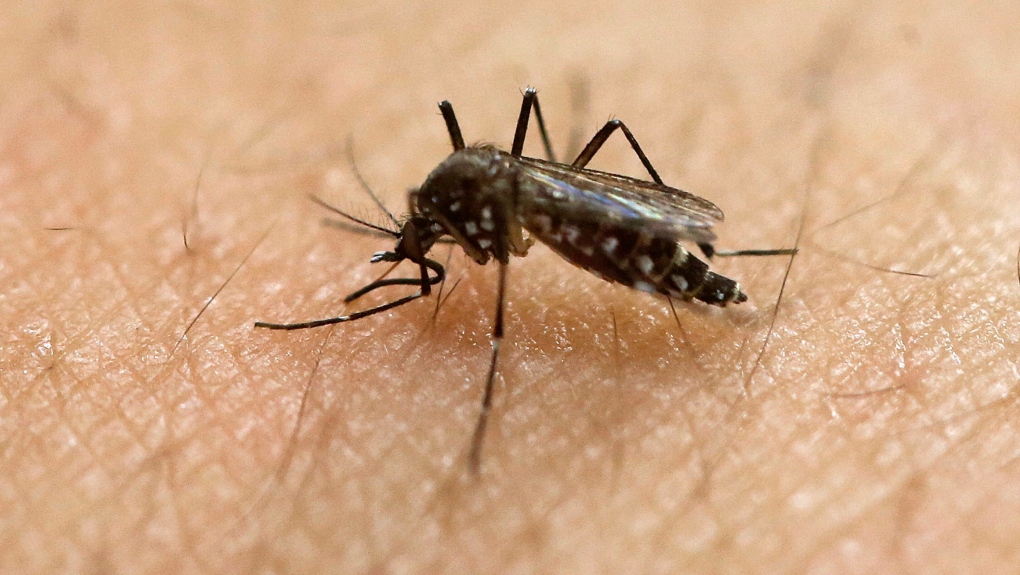 In this Jan. 18, 2016, file photo, a female Aedes aegypti mosquito, known to be a carrier of the Zika virus, acquires a blood meal on the arm of a researcher at the Biomedical Sciences Institute of Sao Paulo University in Sao Paulo, Brazil. (AP Photo/Andre Penner, File)

A material that is more than 200 times stronger than steel and remarkably lightweight is being touted as a revolutionary protective barrier with the potential to fend off mosquitoes.

According to the World Health Organization, mosquitoes are more than just pesky irritants responsible for inflicting itchy bites. Instead, the WHO describes them as “one of the deadliest animals in the world” due to their ability to spread a number of diseases to humans.

In fact, the health organization blames mosquitoes for millions of deaths around the world every year from diseases including Zika, dengue, chikungunya, and yellow fever.

That’s why researchers from Brown University in Providence, R.I. were keen to develop a new defence against the insects’ bite.

“Mosquitoes are important vectors for disease all over the world, and there's a lot of interest in non-chemical mosquito bite protection,” senior author Robert Hurt, a professor in Brown’s School of Engineering, said in a press release Monday.

Their solution? A nanomaterial called graphene.

Discovered in 2004, graphene has been praised by scientists for its impressive properties, including its incredible strength, flexibility, lightness, and conductivity. The material is comprised of a single thin layer of carbon atoms arranged in a hexagonal or honeycomb pattern and has been used to improve everything from solar cells to tennis rackets.

As described in a paper recently published in Proceedings of the National Academy of Sciences, the researchers were already studying graphene’s uses when they discovered its potential application in mosquito-bite prevention.

“We had been working on fabrics that incorporate graphene as a barrier against toxic chemicals, and we started thinking about what else the approach might be good for,” Hurt explained. “We thought maybe graphene could provide mosquito bite protection as well.”

To explore this idea, the team recruited some “brave participants willing to get a few mosquito bites in the name of science.”

For the study, the volunteers placed their arms in a mosquito-filled enclosure with only a small patch of skin exposed for the insects to bite. The researchers noted that the mosquitoes used in the experiments were bred in a lab so they were free of disease.

As expected, the researchers found the GO films were resistant to a mosquito’s puncture because they simply couldn’t generate enough force to pierce through the material.

“When skin was covered by dry GO films, participants didn't get a single bite, while bare and cheesecloth-covered skin was readily feasted upon,” the press release said.

However, what surprised the academics was the behavioural change in the mosquitoes when confronted with graphene.

“With the graphene, the mosquitoes weren’t even landing on the skin patch -- they just didn’t seem to care,” lead author Cintia Castilho, a Ph.D. student at Brown University, said.

“We had assumed that graphene would be a physical barrier to biting, through puncture resistance, but when we saw these experiments we started to think that it was also a chemical barrier that prevents mosquitoes from sensing that someone is there.”

To test this theory, the researchers dabbed human sweat, which attracts mosquitoes, on top of the graphene material. With the chemical cues from the sweat on the outside of the barrier, the mosquitoes flocked to the material in much the same way they did to the bare skin.

As a result, the team surmised that graphene is somehow able to block the chemical signals mosquitoes use to sense a blood meal is near.

Before clothing manufacturers rush to incorporate graphene into their outdoor clothing, the researchers said they still have to overcome one important obstacle: how to prevent mosquito bites when the material is wet.

According to other experiments conducted by the team, GO was not resistant to punctures from a mosquito’s proboscis (or long nose) when it was saturated with water. They did find that another less breathable form of GO called rGO was still resistant when wet, but it would be significantly less wearable.

“GO is breathable, meaning you can sweat through it, while rGO isn’t,” Hurt said. “So our preferred embodiment of this technology would be to find a way to stabilize GO mechanically so that is remains strong when wet. This next step would give us the full benefits of breathability and bite protection.”

If they’re able to accomplish this, the researchers said graphene could very well be used as a lining in clothing to prevent mosquito bites without the use of chemicals.