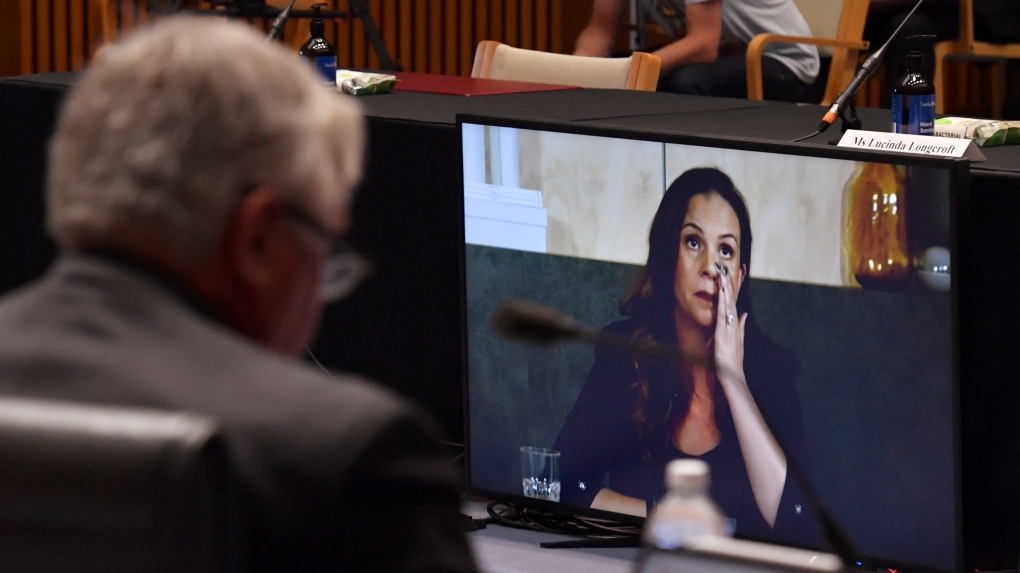 Mel Silva, right, the managing director of Google Australia and New Zealand, appears via a video link during a Senate inquiry into a mandatory code of conduct proposed by the government at Parliament House in Canberra, Friday, Jan. 22, 2021. (Mick Tsikas/AAP Image via AP)

WELLINGTON, NEW ZEALAND -- Google on Friday threatened to make its search engine unavailable in Australia if the government went ahead with plans to make tech giants pay for news content.

"Australia makes our rules for things you can do in Australia," Morrison told reporters in Brisbane. "That's done in our Parliament. It's done by our government. And that's how things work here in Australia."

The confrontation highlights Australia's leading role in the global movement to push back against the outsize influence of U.S. tech giants over the news business.

Morrison's comments came after Mel Silva, the managing director of Google Australia and New Zealand, told a Senate inquiry into the bill that the new rules would be unworkable.

"If this version of the code were to become law, it would give us no real choice but to stop making Google search available in Australia," Silva told senators. "And that would be a bad outcome not only for us, but also for the Australian people, media diversity, and the small businesses who use our products every day."

Google has faced pressure from authorities elsewhere to pay for news.

On Thursday, it signed a deal with a group of French publishers paving the way for the company to make digital copyright payments. Under the agreement, Google will negotiate individual licensing deals with newspapers, with payments based on factors such as the amount published daily and monthly internet site traffic.

But Google is resisting the Australian plan because it would have less control over how much it would have to pay. Under the Australian system, if an online platform and a news business can't agree on a price for news, an arbitration panel would make a binding decision on payment.

Silva said Google was willing to pay a wide and diverse group of news publishers for the value they added, but not under the rules as proposed, which included payments for links and snippets.

She said the code's "biased arbitration model" also posed unmanageable financial and operational risks for Google. She suggested a series of tweaks to the bill.

"We feel there is a workable path forward," Silva said.

Like in many other countries, Google dominates internet searches in Australia. Silva told senators about 95% of searches in the nation are done through Google.

Asked by one senator how much tax it pays, Silva said last year it paid about 59 million Australian dollars ($46 million) on revenues of AU$4.8 billion ($3.7 billion).

Facebook also opposes the rules and has threatened to remove news stories from its site in Australia. Simon Milner, a Facebook vice-president, said the sheer volume of deals it would have to strike would be unworkable.

"Google's testimony today is part of a pattern of threatening behaviour that is chilling for anyone who values our democracy," said Peter Lewis, the director of the institute's Centre for Responsible Technology.