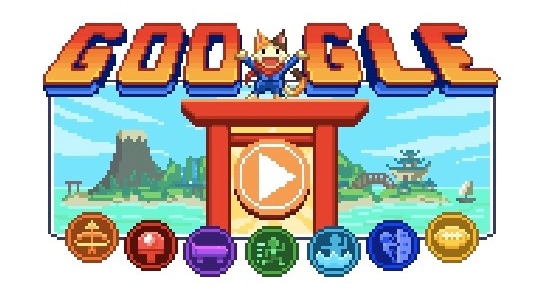 Google's homepage doodle is a throwback to 16-bit video games and a nod to Japanese culture as players work their way through seven sporting events. (Google/STUDIO 4°C)

TORONTO -- Think you have what it takes to compete in a global sporting event? Head on over to Google and join the ranks of people playing their latest doodle, a 16-bit game inspired by Japanese culture and the Olympic Games.

Google’s homepage doodle is an interactive 16-bit game, “Doodle Champion Island Games,” where players, in the form of a calico cat named Lucky, play their way through seven sporting events and dozens of side quests to collect seven sacred scrolls.

The doodle, made with Tokyo’s STUDIO 4°C, takes players through sports like table tennis, skateboarding, archery and rugby. Players will collect points for one of four teams, blue, green, red or yellow, each with their own mascot rooted in Japanese culture. The teams will battle to take the lead on a real-time, global scoreboard.

Clicking on the doodle will launch the game with delightfully nostalgic theme music. If 90s video games bring on a flood of happy memories, clicking the doodle will bring you back to the best days of your life, which is what the developers planned.

“When people play this doodle, I hope they feel nostalgic for video games from the past, and have fun playing sports, exploring the world, and learning,” Nate Swineheart, a Google developer said in a behind-the-scenes video shared on Google’s YouTube.

As Lucky the calico, players will navigate her through Champion Island’s sporting events that take place every four years and feature the world’s best athletes, similar to real life events happening in Tokyo.

The game is meant to be a fun throwback to the 16-bit games popular with many Millennials and Gen-Xers, while also celebrating Japanese culture and folklore.

As Lucky, players will enter Champion Island and battle it out over table tennis to get through the red gates. Players navigate predominantly using the arrow keys and spacebar. It’s easy enough for anyone to enjoy, and remains interesting throughout as Lucky outruns tree spirits in a beach marathon and competes against mountain-climbing owls.

In a behind-the-scenes video, the game designers said they included researched Japanese folklore from regions across the country to help build characters that would appeal to all ages. Characters in the game include animals, imaginary figures and those of folk legends.

The designers opted to make Lucky a woman to go against the grain in Japanese culture where women in folklore are often scary characters. They wanted women to feel included in the game. They opted for her to be a calico cat because calicos are well known in Japan and a lot of calico cats are female, Tomoko Ogiwara, a producer and animator with STUDIO 4°C who worked on the game, said in the video.

The game designers referred to folklore to find characters that complemented the various sports in the game. When adapting archery for the game, they looked for a character in Japanese stories that used a bow and arrow and used Nasu no Yoichi, a samurai known for his bow and arrow, Takahiro Tanaka, creative director with STUDIO 4°C, said in the video.

They hope that people playing the game will have people wanting to learn more about the characters shown through the game and its animations, that it will compel people to research and learn more about Japanese culture and folklore.