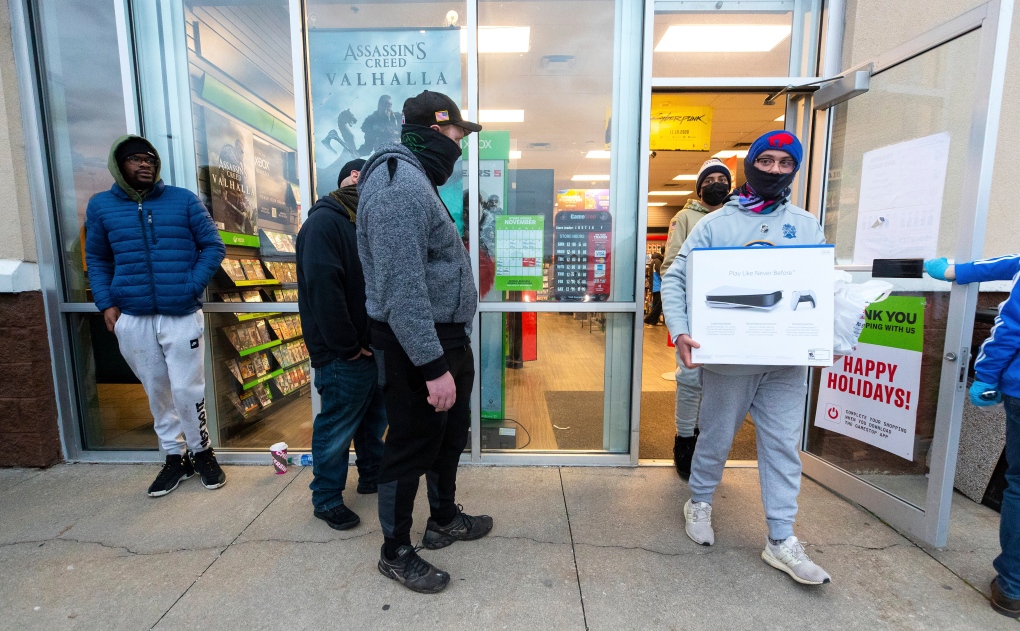 Electronics retailers have faced major stock shortages when it comes to the PlayStation 5, pictured here, and Xbox Series consoles as well as the new graphics cards from Nvidia and AMD. (Christopher Dolan/The Times-Tribune via AP)

TORONTO -- As the pandemic rages on, more Canadians are looking to video games to pass their time indoors. But the global shortage in computer chips has made it difficult for buyers to get their hands on game consoles and PC graphics cards.

Electronics retailers have faced major stock shortages when it comes to the recently released PlayStation 5 and Xbox Series consoles as well as the new graphics cards from Nvidia and AMD.

Resellers have also seized upon the shortages to make a quick buck. Sites like Kijiji, eBay and Facebook Marketplace are rife with ads listing these products for two or three times their original retail price.

Some Canadians have turned to following social media accounts that track inventory.

Lee, an Alberta-based software developer who only wished to provide his first name, is better known as @Lbabinz​ to his more than 54,000 Twitter followers and 12,000 members of his Discord server. About seven years ago, he developed a program that would automatically track and post on social media whenever a highly sought-after video game products comes in stock.

“Over the course of these years, I’ve been building up a community, leveraging technology and just growing this into a thing to help Canadian find the really difficult things they want to find. It’s just sort of evolved into this community of Canadians helping each other out,” he told CTVNews.ca on Thursday evening.

Since the shortages began, Lee says he’s noticed a massive increase in the number of people using his services. And whenever these products do come in stock, they sell out fast – sometimes within seconds.

“The graphics cards, they’ve just been crazy. They disappear sometimes in under a minute, depending on stock. They’re just ridiculous right now,” said Lee.

As for consoles, Lee said the PlayStation 5 tends to sell out in less than five minutes while the Xbox tends to stay in stock for around 30 minutes.

It’s not just gamers who are dealing with these stock shortages. Even car manufacturers are struggling to acquire the semiconductors they need.

Earlier in February, General Motors announced that it was cutting production at four facilities in North America, including at the CAMI assembly plant in Ingersoll, Ont.

Other automakers that have cut production include Volkswagen, Ford, Fiat Chrysler, Toyota and Nissan.

William Mitchell, who is a professor at the University of Toronto’s Rotman School of Business, says that global chip shortages have been caused by big swings in demand due to the pandemic.

“Many products had reduced demand during 2020. Cars, for instance, were down 10 to 15 per cent and as a result, companies that were making chips for those cars reduced capacity because you can’t run the lines at partial capacity,” he told CTVNews.ca. “And then when demand is coming back up in 2021, there’s a spike in orders.”

The intricacies in the chip production process, Mitchell says, have led to significant delay in the chip supply catching up with the increase in demand.

“It’s not just turning a switch back on again. Chips are really sensitive to production quality and when you first start it up, there are flaws. You don’t want to take a flawed chip and stick it in your car,” he said.

On Feb. 24, U.S. president Biden signed an executive order instituting a 100-day review of the semiconductor supply chain. He also announced that he would seek US$37 billion to boost chip manufacturing in the United States.

But Mitchell expects the chip supply woes to be sorted by this summer, much like how toilet paper became easier to find a few months into the pandemic.

“These are professional organizations, both in chip manufacturers and in the assemblers like the car companies. They’re used to dealing with variations in demand,” said Mitchell. “They’re well aware of the shock and how to deal with the shock. It’s not as if we have this permanently shut down capacity, we’ll never be able to fill it up again.”​