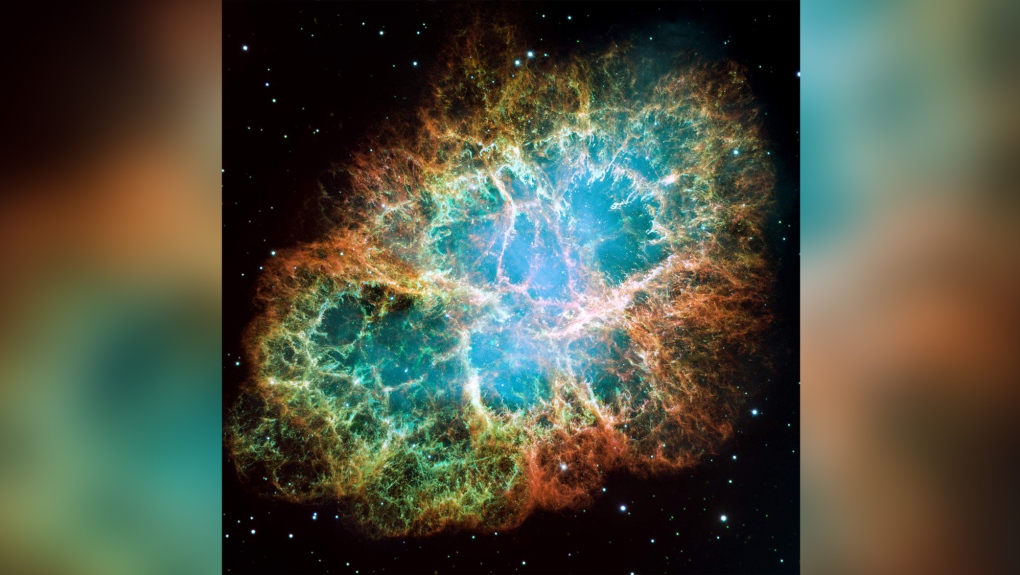 The hauntingly beautiful Crab Nebula, located 6,500 light-years away in the Taurus constellation, is releasing an incredible amount of energy.

The nebula is six light-years wide, and it's a growing cloud of debris formed from a supernova explosion. (A light-year is six trillion miles).

The light from this supernova first reached Earth in July 1054 and was witnessed by astronomers in Japan and China.

When the star exploded, it formed a neutron star, which is the dense core of a star that is about the size of a city like Chicago. This became a pulsar, or rapidly spinning neutron star, that is now located in the nebula.

This star spins 30 times a second and is considered to be one of the brightest pulsars emitting light in X-rays and radio wavelengths that is visible in our sky. When these beams of light sweep by Earth, scientists can catalog those pulses and determine whether it's a pulsar.

The pulsar in the Crab Nebula could be as much as hundreds of times more energetic than researchers previously believed, according to a study published last week in the journal Science.

How the nebula discovery was made

A global team of scientists made the discovery using data from NASA's NICER telescope, or Neutron star Interior Composition Explorer, which is located on the International Space Station.

The NICER telescope was used to observe the Crab Nebula's pulsar between August 2017 and August 2019. It was also observed using ground-based telescopes such as the 34-meter dish at the Kashima Space Technology Center in Japan and the 64-meter dish at the Japan Aerospace Exploration Agency's Usuda Deep Space Center. Kashima's telescope was irreparably damaged by a typhoon in 2019.

"Out of more than 2,800 pulsars cataloged, the Crab pulsar is one of only a few that emit giant radio pulses, which occur sporadically and can be hundreds to thousands of times brighter than the regular pulses," said Teruaki Enoto, study author and team leader at the RIKEN Cluster for Pioneering Research in Wako, Saitama prefecture, Japan, in a statement.

"After decades of observations, only the Crab has been shown to enhance its giant radio pulses with emission from other parts of the spectrum."

The team was able to analyze the largest amount of X-ray and radio data ever simultaneously collected from a pulsar, extending the known energy range by thousands.

Giant radio pulses happen within the millionth of a second and can be unpredictable -- until they occur. Then, they release regular pulses.

The precision of NICER allowed for the recording of X-rays within 100 nanoseconds of detection.

Telescope can keep up

"NICER's capacity for observing bright X-ray sources is nearly four times greater than the combined brightness of both the pulsar and its nebula," said Zaven Arzoumanian, deputy principal Investigator and science lead for NICER at NASA's Goddard Space Flight Center in Greenbelt, Maryland, in a statement.

"These observations were largely unaffected by pileup -- where a detector counts two or more X-rays as a single event -- and other issues that have complicated earlier analyses."

An analysis of the X-rays that occurred in tandem with the giant radio pulses revealed X-ray surges of about 4%, which is very similar to the 3% increase in visible light that has also come to be associated with the pulses.

While that may sound like a small percentage difference, X-rays are millions of times more energetic than radio waves.

As opposed to regular pulses released by the pulsar, these giant ones are likely the result of a process that is producing an emission that spans the electromagnetic spectrum, from radio wavelengths to X-rays, according to NASA.

"We still don't understand how or where pulsars produce their complex and wide-ranging emission, and it's gratifying to have contributed another piece to the multiwavelength puzzle of these fascinating objects," Enoto said.

Understanding more about these giant radio pulses could provide insight about mysterious fast radio bursts that travel millions and billions of light-years to reach Earth.

Some scientists believe that the mechanics behind the origin of giant radio pulses from pulsars may also be the same as the origin of fast radio bursts. These bursts, known as FRBs, are also millisecond-long radio signals and some of them have even been traced back to their source and have known to repeat. But their origins are unknown.

It is thought that these fast radio bursts, which occur outside of our galaxy, have also been associated with pulsars.