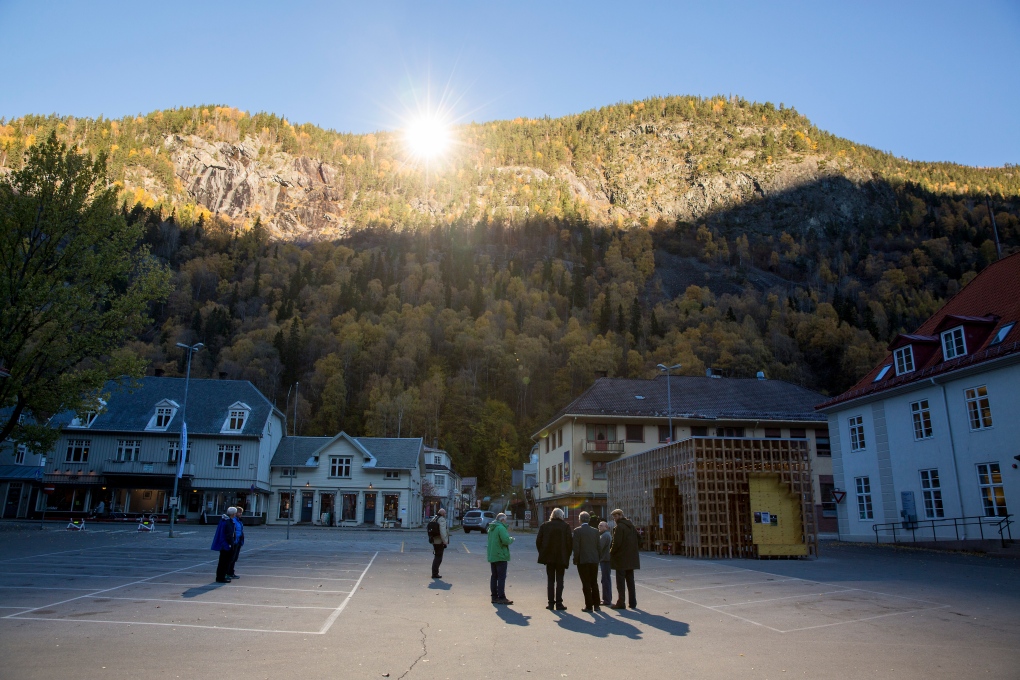 People gather in a spot in front of the town hall of Rjukan, Norway, on Oct. 18, 2013, where sunshine is reflected by three giant mirrors erected on the mountainside. Rjukan, known for its darkness in winter, is located in the bottom of a valley between steep mountains. (MEEK, TORE / NTB SCANPIX / AFP)

OSLO (AFP) -- Residents of a remote village nestled in a steep-sided valley in southern Norway are about to enjoy winter sunlight for the first time ever, all thanks to giant mirrors.

The mountains that surround the village of Rjukan are far from Himalayan, but they are high enough to deprive its 3,500 inhabitants of direct sunlight for six months a year.

That was before a century-old idea, as old as Rjukan itself, was brought to life: to install mirrors on a 400-metre high peak to deflect sunrays towards the central square.

"The idea was a little crazy, but madness is our middle name," said Oeystein Haugan, a local project coordinator.

"When Rjukan was founded, it was a bit crazy to start a community in the middle of nowhere with this massive hydroelectric plant, huge pipes and a railway line to transport fertiliser to the rest of the world," he added.

It was first mooted by Norwegian industrialist Sam Eyde, at whose behest Rjukan was established.

From just 300 inhabitants spread out across scattered farms in 1900, the population grew to 10,000 by 1913 and the ambitious industrialist endorsed a project to deflect sunrays into the village.

"It's one of the few projects that Eyde was unable to complete, due to a lack of appropriate technology," mayor Steinar Bergsland said.

Instead he built a cable car, which is still in use, to allow his employees to recharge their vitamin D levels with sunlight on a mountain top.

An artist Martin Andersen, who arrived in the village from Paris, picked up the idea around ten years ago.

"The further we got into winter, the further we had to drive out of the valley to enjoy sunlight. So I asked myself: why not move the sunrays instead of moving ourselves?" he explained.

The idea was challenged by other residents who questioned the appropriateness of investing public money in the project instead of in nurseries and schools.

"Some labelled it a Mickey Mouse project and it's true it's a little insane, but we have to think out of the box and explore new paths," the mayor said.

Five million kroner ($849,000) was raised for the project -- four million from sponsors -- and now three 180-square-foot mirrors tower over the north side of Rjukan village.

A computer will control the mirrors so that they follow the sun to reflect the light on the market square, lighting up a 6,500-square-foot elliptical area.

The inauguration is scheduled for sometime next week, depending on weather conditions.

"After basking in the sun, people are beaming themselves," Haugan said after the final tests.

Besides getting more cheerful citizens, local authorities hope to capitalise on the extensive media coverage of the feat to bring in more tourists.

Encouraged by its expected tourist revival, Rjukan even hopes to be included in the Unesco World Heritage List by 2015, as an example of human industrial genius.

"We have already recovered our investment dozens of times over. Maybe not in cold, hard cash for the local council but in publicity and marketing value," administrative head of the municipality Rune Loedoeen said.

"Now it's up to us to manage this asset properly."