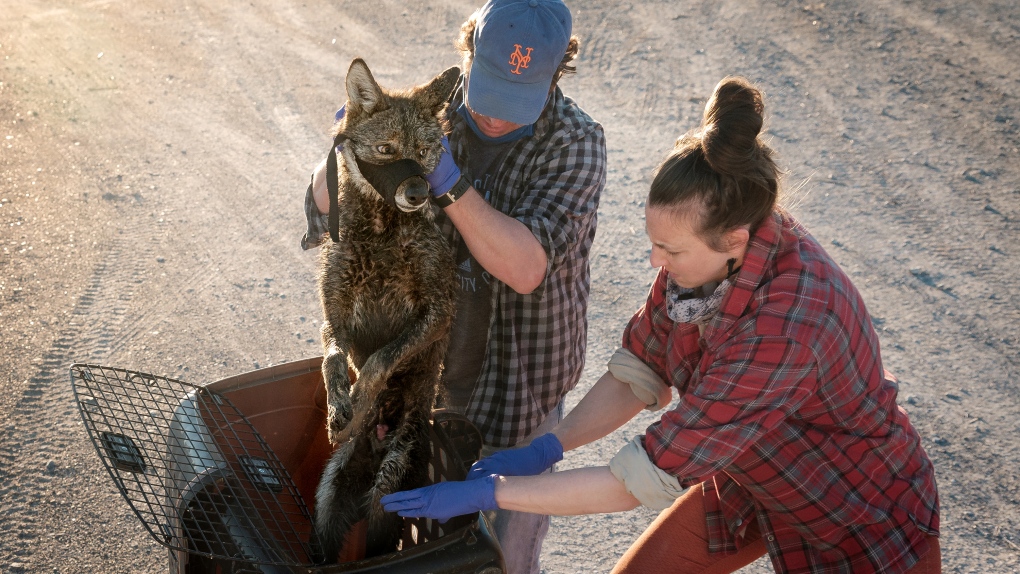 Dr. Joey Hinton and Dr. Kristin Brzeski prepare to collar and process a Louisiana coastal coyote for their study that explores the red wolf ancestry found in this special group of canids. (Amy C. Shutt/CNN)

Scientists are hopeful that the key to reviving red wolves, which are on the brink of extinction, may lie in the genes of coyotes that have significant red wolf ancestry.

Red wolves once lived throughout the southeastern United States but were declared extinct in the wild in 1980. Today, thanks to the work of conservationists, there are around 20 red wolves in the wild in North Carolina, re-released from the captive populations, and 240 in American zoos and sanctuaries.

Bridgett vonHoldt, a biologist at Princeton University, had heard stories from observers in Texas and Louisiana who noticed that the coyotes in their areas were "different" -- larger and more visually similar to red wolves than a typical coyote. Genetic research published in Science Advances by vonHoldt and her team on June 29 found that many of those coyotes had significant red wolf ancestry, a result of interbreeding between red wolves and coyotes.

"Even though the red wolves went extinct, or so we're told, those genes likely survived in these coyotes that carry that legacy with them," explained Vonholdt to CNN. These "ghost genes" might play a crucial role in preserving the red wolf population.

The research focuses on a population of coyotes in southwestern Louisiana, close to where the last surviving red wolves were identified and moved into captivity in the 1970s.

The team took samples from around 30 coyotes in Louisiana and analyzed their genetics for similarity to red wolves. The "range of red wolf ancestry is anywhere from 30 to 70%," vonHoldt said.

The discovery raises significant questions for conservation policy. Coyotes, far from being endangered, are abundant throughout many parts of North America and are legal to hunt in the United States. But red wolves are protected by the U.S. Fish and Wildlife Service. Decades of interbreeding have made it difficult to delineate clearly between the two species, as vonHoldt's genetic analysis of the southwestern Louisiana coyotes demonstrates.

"Most people will likely ask: If something has 70% red wolf genetics, is that a red wolf?" said vonHoldt. "I don't have an answer for them. It's a federal designation."

"We have to work on what our definition is, where we draw those lines -- it's not easy," she said.

"Coyotes are not an endangered species, but now if we suspect they're carrying a lot of endangered genetics as a legacy, that could be useful to preserve red wolves," vonHoldt added.

Because the population of red wolves is so small, they have faced a genetic bottleneck, vonHoldt told CNN. "The captive red wolf program struggles with a highly related population," she said. "We want to avoid inbreeding, but there's a finite number of animals."

Introducing the "valuable genetic material" from the Louisiana coyotes could boost the "genetic health" of the red wolf population, said vonHoldt. This could be done by releasing red wolves from the captive breeding program into southwestern Louisiana, where they would likely seek out coyotes with significant red wolf ancestry to mate with.

VonHoldt and her team hope to introduce a more comprehensive survey of coyotes in southwestern Louisiana. Rather than trapping and collaring red wolves, they could use scat samples to produce estimates of which areas in Louisiana have coyotes with the highest percentage of red wolf ancestry. This data could be used to secure protections for coyotes in designated areas.

And they plan to monitor the group of coyotes they trapped and collared in Louisiana, seeking to understand whether their behavior is closer to that of coyotes or that of red wolves.

"Even though these animals genetically, in my opinion, seem to be very important, we don't know much else about them," vonHoldt said. "This is our second year doing the study, so we plan to start looking at every aspect of their lives, which goes from spatial landscape use, what they're doing, what they're eating, how big their territory is, how they use the landscape."

The Canadian Border Services Agency is temporarily allowing fully vaccinated travellers a one-time exemption to not be penalized if they were unaware of the health documents required through ArriveCan.

The man accused in the stabbing attack on Salman Rushdie pleaded not guilty Saturday to attempted murder and assault charges in what a prosecutor called a 'preplanned' crime, as the renowned author of 'The Satanic Verses' remained hospitalized with serious injuries.

Canadian Blood Services says it is in talks with companies that pay donors for plasma as it faces a decrease in collections.

Who is novelist Salman Rushdie and why has he faced death threats?

After facing years of controversy over his book, famed novelist Salman Rushie remains hospitalized after a stabbing attack left him with serious injuries. CTVNews.ca has a look at his life and why his work has prompted years of death threats.

About 14 per cent of Ontario hospitals reporting less than a week supply of epidural catheters: Ontario Health

Approximately 14 per cent of hospitals in Ontario are reporting they have less than a week’s worth of epidural catheters in stock, according to an Ontario Health memo sent to hospital chief executive officers on Friday.