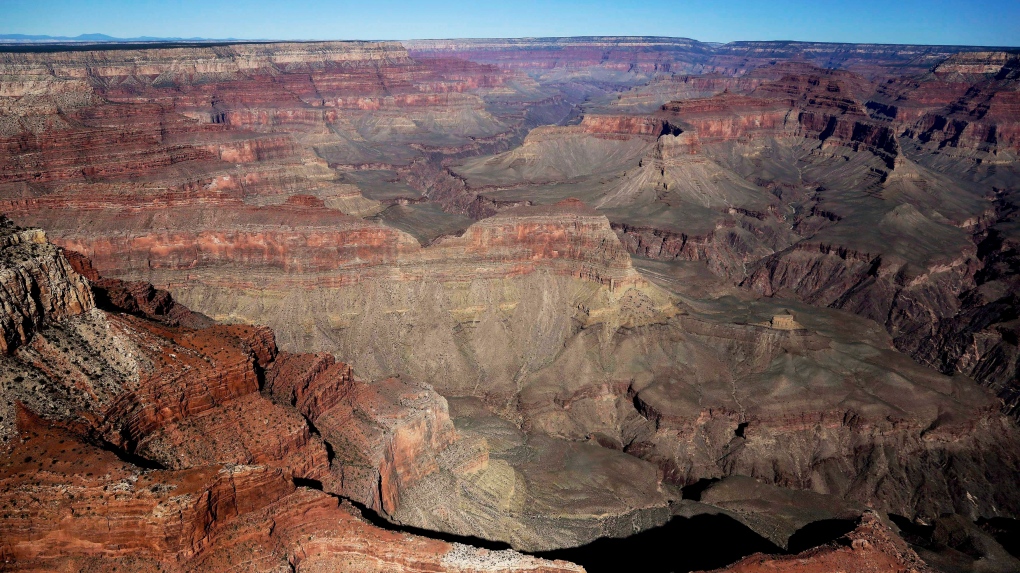 In this Oct. 5, 2013, file photo, the Grand Canyon National Park is covered in the morning sunlight as seen from a helicopter near Tusayan, Ariz. (AP Photo/Julie Jacobson)

LAS VEGAS -- A geology professor from the University of Nevada, Las Vegas, said he recently identified fossilized tracks from a reptile along a popular trail in Grand Canyon National Park, a newspaper reported.

Professor Steve Rowland theorized that the tracks belong to a primitive reptile the size of a baby alligator and date back about 315 million years, the Las Vegas Review-Journal reported Thursday.

The 28 footprints run diagonally across a boulder on the edge of the Grand Canyon's Bright Angel Trail.

Rowland shared his findings at the Society of Vertebrate Paleontology's annual meeting last month in Albuquerque, New Mexico. He hopes to submit a scientific paper in January.

He first saw the prints last year during a family vacation and said they "turned out to be quite extraordinary." He said he heard about them from another geologist who spotted them during a 2016 hike.

Scientists will likely never know exactly what kind of animal left the tracks, Rowland said, adding that he envisions a lizard-like creature about 2 feet (0.6 metre) in length, similar to a Galapagos iguana.

He said he's talked with park officials about what to do with the boulder with the prints and would like to see it moved from the canyon and added to a museum.

She said removing the rock and displaying it elsewhere doesn't align with the National Park Service's mission to preserve resources in their natural state.

"But we may put up an interpretative sign telling people what they're looking at," Cobb said.