Geminids: One of the year's best meteor showers set to return this December 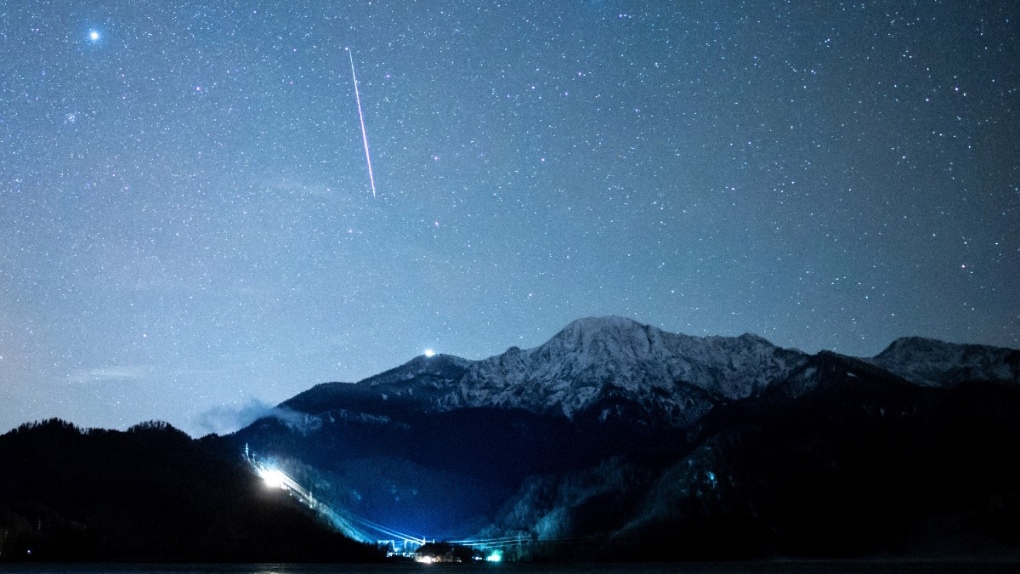 A shooting star can be seen during the Geminid meteor stream in the starry sky above the Kochelsee and the summit of the Herzogstand in Germany, early Dec. 14, 2020. (Matthias Balk/dpa via AP)

BURLINGTON, ONT. -- One of the best meteor showers of 2021 will make its annual return this December — with the best time to view them slated to be in a couple of weeks, experts say.

The Geminids meteor shower, named after the Gemini constellation where they appear to come from, will start Dec. 3.

But the expected peak time to view the display, particularly for those in Canada and the United States, will be the evening of Dec. 13 and 14 at around 2 a.m. EST.

"In general, I always recommend if you've got clear skies, take 20 minutes and look up, because it should be a good show," said Elaina Hyde, an assistant professor in the physics and astronomy department at York University in Toronto and director of the Allan I. Carswell Observatory.

Speaking to CTVNews.ca by phone, Hyde says the Geminids are an annual favourite and tend to have more meteors per hour than many others — in this case, as many as 50 to 150 per hour could appear.

At 2 a.m., the Gemini constellation should be quite high in the night sky, making the meteors much more visible.

Stargazers also shouldn't be surprised to see blue or even green colours during the meteor shower, which Hyde says are natural colours that occur when some of these space rocks burn up while passing through Earth's atmosphere.

"If you see it split into multiple pieces, don't be alarmed," she said. "That can often happen."

What makes this meteor shower particularly interesting is while a lot of others happen as a result of comets travelling through the solar system, Hyde says this one stems from an asteroid.

This specific asteroid, called 3200 Phaethon, takes one-and-a-half years to orbit the sun once and may be a "dead comet," NASA says, or a new kind of object referred to as a "rock comet."

Measuring 5.1 kilometres in diameter, Phaethon is named after the Greek mythical character who drove the sun god Helios's chariot.

Hyde says similar to how mud in a dry lake bottom will crack under heat, Phaethon is believed to crack from the heat of the sun, causing more debris to be ejected over time. Larger pieces of rock may break off, which could result in more interesting shows from the Geminids.

"But this one goes across through Earth's orbit and leaves a little trail, and it leaves a bright enough trail that we can actually get a pretty good show of it," Hyde said.

"So we're expecting the Geminids for Toronto to get reasonably high in the sky, so they'll be pretty prominent."

Several planets, including Venus, Saturn and Jupiter, also should be visible in the night sky.

One question that remains is whether or not the evening will be cloudy.

A waxing gibbous moon, a nearly full moon that will be about 80-per-cent illuminated, also may make some of the more faint meteors more difficult to see.

However, Hyde says while it can take up to 15 or 20 minutes for people to adjust their eyes to the darkness, the really bright meteors should still be visible.

As for tips on how best to view the meteor shower, Hyde says the show can be seen with binoculars or even just the naked eye.

Canadians could use a planisphere, a hand-held device showing which stars are visible at a particular time, or a Stellarium app to find the Gemini constellation.

And depending on where you live, warm clothes are recommended.