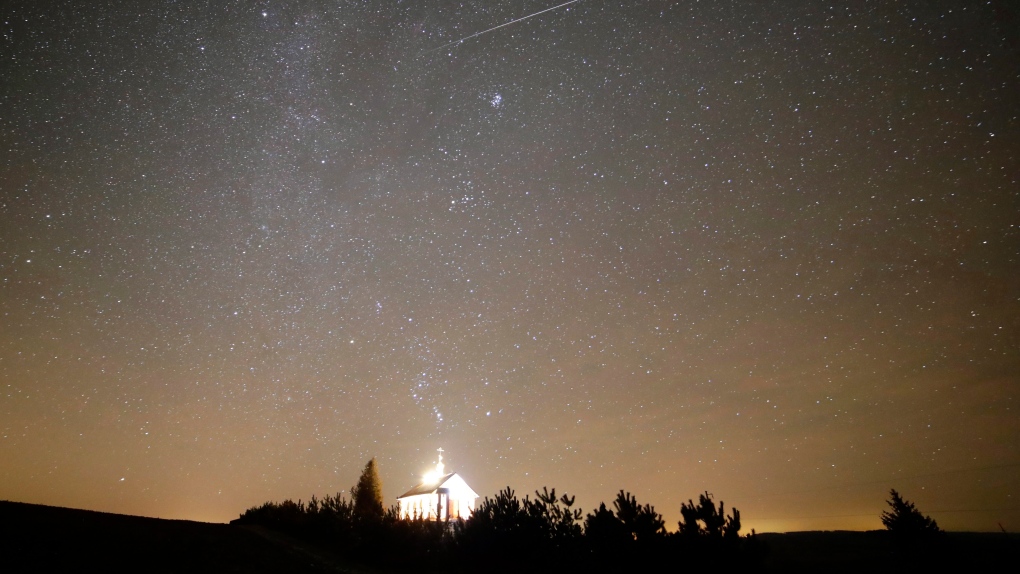 A meteor streaks across the sky during the annual Geminids meteor shower over an Orthodox church on the local cemetery near the village of Zagorie, some 110 kilometres (69 miles) west of capital Minsk, Belarus, late Wednesday, Dec. 13, 2017. (AP Photo/Sergei Grits)

Described by NASA as "the cosmos' annual gift to sky watchers," one of the most stunning displays of shooting stars will peak later this month.

According to NASA, the Geminids meteor shower is one of the most spectacular shows of the entire year, and its peak will begin the evening of Dec. 13 and continue through the early morning hours of Dec. 14.

The meteor shower happens when the earth passes through the debris of the asteroid known as 3200 Phaethon. It was coined the Geminids because the meteors appear to radiate from the constellation Gemini, according to a post on NASA's website.

During the cosmic show’s peak, under ideal weather conditions, viewers would normally be able to see approximately 100 to 150 meteors per hour. But this year, gazers should expect far fewer. According to NASA, due to a waning gibbous moon (a moon more than half-full) only about 30 to 40 meteors per hour will be visible at the peak in the Northern Hemisphere.

For an ideal location to see the shooting stars, find a place under the shade of a house or tree with a clear view of open sky to alleviate moonlight interference. Expect to wait some time. It may take 30 minutes for your eyes to fully adjust to be able to see the meteors.

It is important that you avoid looking on bright objects such as cellphones or computers while your eyes are adjusting, NASA says. No special equipment or skills are required to view a meteor shower.

"Meteors close to the radiant have very short trails and are easily missed, so observers should avoid looking at that constellation. However, tracing a meteor backwards to the constellation Gemini can determine if you caught a Geminid (other weaker showers occur at the same time),” the post on NASA’s site says.

The shower should be visible for most of the night and morning.

The Geminids travel at a rate of 78,000 miles per hour (125,529 kilometres per hour), according to NASA, and most of the meteors burn up at altitudes between 45 to 55 miles (72 kilometres to 89 kilometres), so they rarely make contact with the Earth's surface.