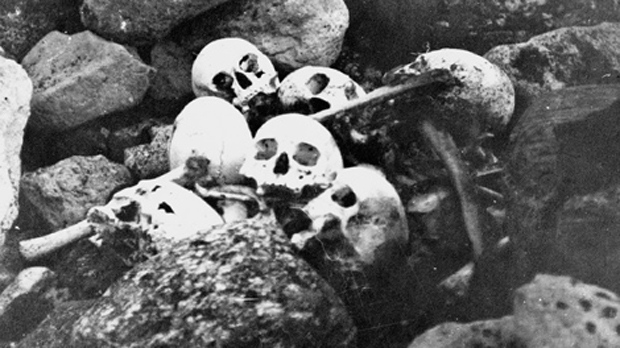 Researchers who have completed the first genetic analysis on the bones from the crew of the doomed Franklin expedition in Canada's Arctic say they're hoping to meet living descendants to match them with the remains of their ancestors.

Anne Keenlyside, an anthropologist at Trent University and co-author of a study on the remains, performed DNA analysis of tooth and bone samples recovered from eight sites where sailors died after they deserted the HMS Erebus and HMS Terror in April 1848.

Keenlyside said the analysis doesn't shed much light on what befell the expedition, which became icebound while looking for the Northwest Passage. But researchers have put a call out to genealogists in Canada and the United Kingdom for anyone who can trace a family tree to the Franklin sailors.

Matching the DNA with the living would indicate who died where, the study says.

"If we can find those living descendants -- if they're directly descended from those crew members -- and if they're willing to submit a DNA sample in the form of a ... cheek swab, then we can analyze their DNA, compare it to the DNA extracted from these skeletal remains and see if there is a match," Keenlyside told The Canadian Press.

Doug Stenton, lead author of the study released online in the Journal of Archeological Science: Reports, said knowing who the men were would shed light on their rank. That information would add to a bank of knowledge that could one day unlock the mystery of the failed mission.

"I think it's going to be a combination of things that ultimately lead to an understanding of what happened," said Stenton, who is with Nunavut's Culture and Heritage Department. "It's important we take advantage of as many sources as we can."

The Franklin expedition left England and headed north, never to return, in 1845. Its two ships were found within the last three years by underwater archeologists.

How things went so badly wrong has remained a mystery and a legend.

DNA analysis was difficult because many of the remains were exposed to the harsh northern elements for more than 150 years, Keenleyside said. DNA also degrades over time.

A cairn that was found in 1859 indicated that 105 men left the icebound ships in April 1848 and came ashore on the northwest coast of King William Island. It's believed their plan was to walk along the Back River to a Hudson Bay Co. post.

The DNA study concluded that 21 people, or 20 per cent of the sailors who left the ships, died at five of the sites within a small area of Erebus Bay, which is only about 70 kilometres from where the crew came ashore. Since a few crew members made it 230 kilometres further to Montreal Island, the study's authors suggest there must have been significant health differences between the men when they left the ships.

"Why did so many men die so early on? Something must have gone severely wrong," Stenton said.

Some theories about why the mission failed include lead poisoning and spoiled tinned preserves.

This summer, Parks Canada's underwater archaeology team is to return to Nunavut to conduct some preliminary dives on HMS Terror and continue the archeological work on HMS Erebus.

Stenton said more clues are likely to be uncovered as dive teams explore the shipwrecks.

The researchers say they've already made preliminary contact with some descendants of the crews. And they say more clues are out there.

"Of the 129 crew members, we've only recovered the remains of maybe 30 of those individuals," Keenleyside said.

"What happened to the rest of them? It leaves you wondering whether additional human remains will be found of these crew members."