For the first time, a robot has performed surgery on the soft tissue of a pig without human guidance 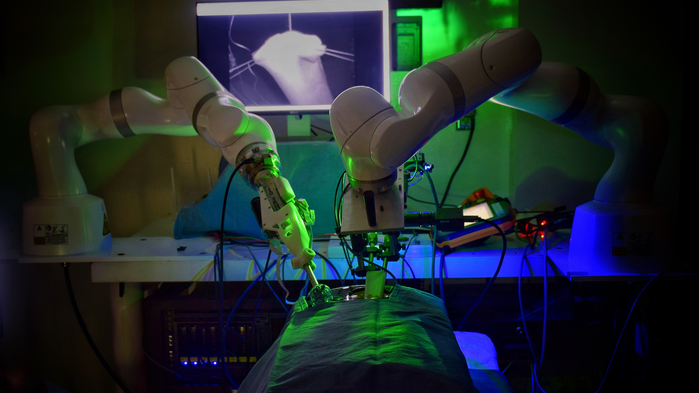 The Smart Tissue Autonomous Robot can perform laparoscopic surgery on the soft tissue of a pig without human help. (Johns Hopkins University)

It’s one small suture for robots, one big step for the field of robotics — for the first time, a robot has performed a surgery on the soft tissue of a pig from start to finish without a human helping to guide it.

The achievement, described in the journal Science Robotics on Wednesday, takes us closer to robots performing intricate surgery on humans with a level of precision that researchers say could exceed human doctors.

And the surgery the robot performed was no small feat.

“Our findings show that we can automate one of the most intricate and delicate tasks in surgery: the reconnection of two ends of an intestine,” Axel Krieger, an assistant professor of mechanical engineering at Johns Hopkins University’s Whiting School of Engineering and senior author of the research, said in a press release.

“The STAR performed the procedure in four animals and it produced significantly better results than humans performing the same procedure.”

The robot is called the Smart Tissue Autonomous Robot — STAR for short — and this is its latest iteration. A 2016 model of the robot performed a surgery to repair a pig’s intestines, but the older model had to utilize a large incision to reach the intestine, and needed more hands on guidance from humans.

Now, STAR is capable of laparoscopic surgery on soft tissue, a type of procedure which allows surgeons to access the inside of the abdomen without making a large incision in the patient’s skin, also known as keyhole surgery.

In order to perform surgery to repair an intestine, it requires extreme focus for surgeons, as they will need to make small, repetitive motions for an extended period while suturing the intestine back together. It’s the perfect challenge for a robot, as a robot can’t fall victim to a sudden hand cramp or tremor — both of which could cause the slightest leak in the intestines, potentially leading to life-threatening surgical complications for a patient.

Researchers at Johns Hopkins University, working with collaborators at the Children’s National Hospital, have been working on the robot for years.

Krieger explained that the new model which achieved the autonomous surgery has a control system that allows STAR to change its surgical plan as it works with the tissue, allowing it to adapt to any challenges that arise as they do.

“What makes the STAR special is that it is the first robotic system to plan, adapt, and execute a surgical plan in soft tissue with minimal human intervention,” he said.

It also has an endoscope capable of 3D imaging in order to guide the robot’s actions.

A photo of the robot performing the surgery itself shows multiple white arms that end in surgical tools hovering above the pig. The pigs were monitored for a week after the surgery was performed in order to compare the healed intestine with surgical models.

According to the study, more than a million anastomoses (surgery to rejoin two tubular structures) are performed in the U.S. every year, which means that improving it through robots could be a life-saver.

“Robotic anastomosis is one way to ensure that surgical tasks that require high precision and repeatability can be performed with more accuracy and precision in every patient independent of surgeon skill,” Krieger said. “We hypothesize that this will result in a democratized surgical approach to patient care with more predictable and consistent patient outcomes.”

The work isn’t over — the research explained that the success of these surgeries have already given researchers ideas for what tweaks they can make to the robot’s design, including better imaging to reduce the suturing time and a proximity sensor at the tip of the surgical tools in order to track tissue contact and tension better.

All steps towards the ultimate goal of STAR performing this surgery on humans someday.