Flying snakes? Here's how they can glide through the air 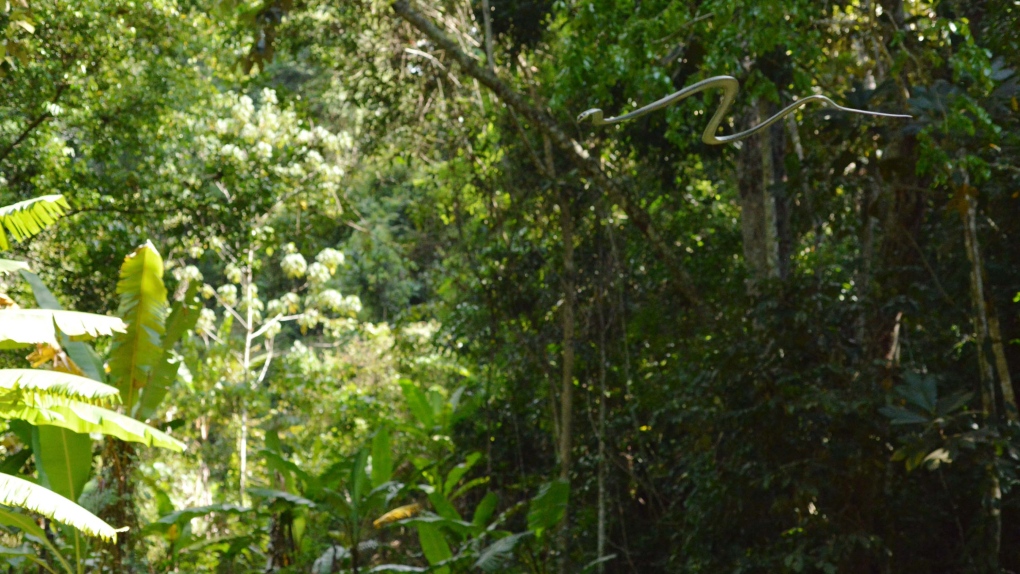 New research has revealed how flying snakes move through the air. (Jake Socha)

For some, the sight of a snake slithering on the ground is scary enough, so how about one launching itself through the air?

Chrysopelea paradisi -- the paradise tree snake -- does just that, propelling through the air from trees in South and Southeast Asia.

Little was known about how such snakes "fly" before a team of scientists from Virginia Tech published a new research paper Monday.

Experts say the snakes glide through the air, so study lead author Isaac Yeaton told CNN the team set out to understand how they do so.

The snakes make an undulating motion as they move through the air, and researchers had been curious as to why they did it.

The team had a basic understanding of undulation, thanks to the work of study author Jake Socha, who has been studying the snakes for around 20 years, said Yeaton.

All snakes undulate when they move across the ground, but flying snakes also do it in the air.

You don't strictly need to undulate to fall, so that leads to the question 'well then why are they undulating,'" said Yeaton.

One hypothesis was that it was a base motor pattern for snakes built in over millions of years, but Yeaton said they now understand the undulation stabilizes the glide and stops the snake from tumbling, as well as allowing them to cover more horizontal distance.

The researchers carried out indoor experiments with live snakes at Virginia Tech and also developed a computational model. "It's a big step forward," said Yeaton.

The next stage for researchers is to observe snakes jumping from trees -- or gliding -- outdoors, Yeaton said, as well as investigating how they generate lift and how they turn in the air.

He told CNN snakes are "question-generating organisms" and there are plenty more mysteries to be solved.

"As soon as you watch it you're like 'how does it do that?'" said Yeaton, who added that this might be why so many people are afraid of the reptiles.

"We have a visceral response to snakes," he said. "Then the idea that this animal can then fly is very unsettling to people."

The full research was published in the journal Nature Physics.