Flying lines of lights in the night sky? Here's what Elon Musk has to do with them 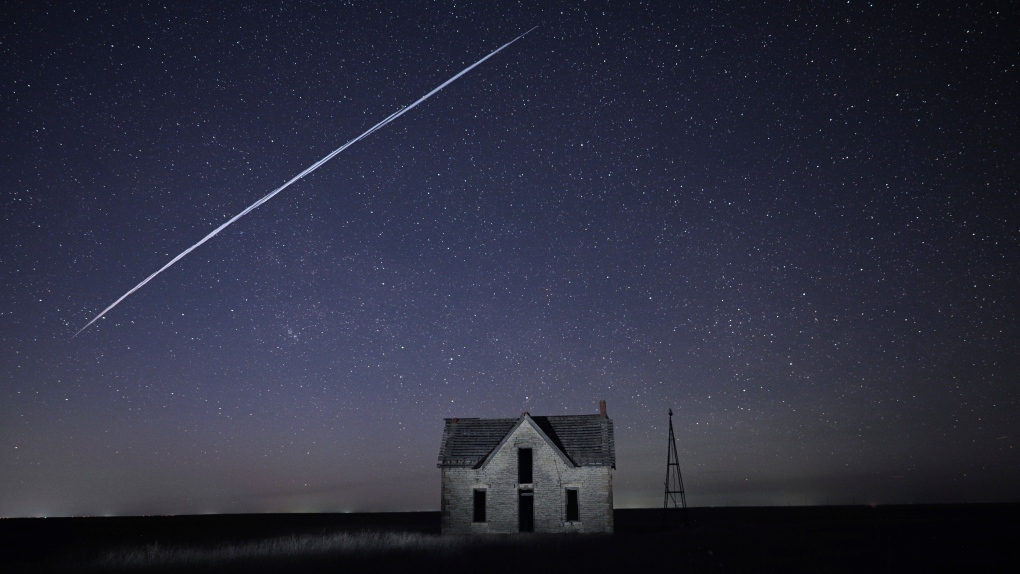 In this photo taken with a long exposure, a string of SpaceX StarLink satellites passes over an old stone house near Florence, Kan., Thursday, May 6, 2021. (AP Photo/Reed Hoffmann)

TORONTO -- In several parts of the world, strange objects that appear to look like bright strings of light have been spotted in the night skies, baffling sky watchers.

But they’re not UFOs or aliens.

Rather, experts say these bright lights are from Starlink satellites launched into orbit by Elon Musk's company SpaceX.

The satellites orbit low to the Earth, making them appear considerably brighter than any star and visible to the naked eye, even during twilight hours and in urban areas with light pollution. Winnipeg resident Rachel Glufka witnessed the satellites outside her house just before sunrise.

"When I looked outside, I could see this bright long stick of light in the sky. It almost looked like there's like individual lights on it too, which was weird," said Glufka, in an interview with CTVNews.ca.

"Everyone has no idea what it was, and it was just a little chaotic that night."

These satellites, which have been called "megaconstellations" for the way they form into constellations, operate in low Earth orbit, which is also where the International Space Station operates.

The satellites don't emit any light themselves, said Samantha Lawler, an astronomer at the University of Regina. Instead, they're visible because they reflect sunlight.

"It's like a train of stars moving together in a line. And so, a lot of people have seen these and thought that it would be aliens or something like that," Lawler told CTVNews.ca over Zoom.

Prior to SpaceX, there were approximately 3,000 operational satellites in orbit. Lawler says most of these pre-existing satellites are communications satellites that operate further from the Earth, making them more difficult to see compared to the Starlink satellites.

In total, the company has sent around 1,500 satellites into orbit and plans to have 12,000 in orbit within the next five years and another 30,000 after that.

Being in low Earth orbit is what allows the Starlink satellites to offer high speeds and low latency, SpaceX says. The company says their satellites are "over 60 times closer to Earth than traditional satellites."

SpaceX has tried to reduce the reflectivity of their satellites after complaints from astronomers. The company has applied anti-reflective coating to their newer satellites, but Lawler says even with the coating, the satellites are still visible to the naked eye.

Canadians can currently pre-order the service, which costs C$129 per month. According to the Starlink website, SpaceX expects to roll out the service to regions where it’s not already available, such as Vancouver and Winnipeg, by mid to late 2021. In some regions, such as the Toronto area, the service is already available, but is at capacity and new customers won't be able to join until late 2022, the company says.

SpaceX won't be the only company brightening up the night sky. In July 2020, U.S. regulators approved Amazon's plans to send over 3,000 satellites for its own satellite high-speed internet service.