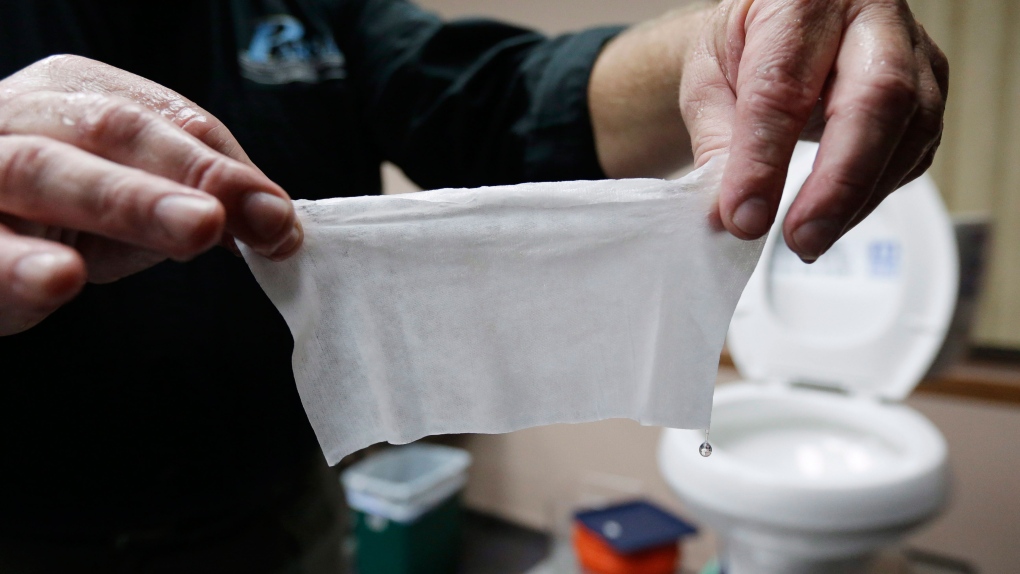 Rob Villee, executive director of the Plainfield Area Regional Sewer Authority in New Jersey, holds up a wipe he flushed through his test toilet in his office, Middlesex, N.J., Friday, Sept. 20, 2013. (Julio Cortez/AP)

CALGARY -- The long-running "flushable wipes" controversy has turned into an ongoing war of words in Canada, with manufacturers insisting their moist towelettes are more sewer-friendly than ever as municipalities urge citizens to put them in the garbage, not down the loo.

More than a dozen lawsuits have been launched in the United States against manufacturers, claiming damages to individual or municipal sewer systems, but in Canada the fight is so far a public relations battle.

Metro Vancouver, for instance, is spending $200,000 on an "Adult Toilet Training" program this summer, using humourous videos and ads in pink port-a-potties to bring the message to its 2.5 million system users that it's not OK to flush "flushable" wipes -- or anything else other than "pee, poo and toilet paper."

In Fredericton, the city warns: "If you did not eat it first, you should find another way to dispose of it," on its website.

Toronto's wastewater division advises residents not to flush any wipes -- "even those that say flushable can cause a problem."

The industry, however, is unrepentant. Lynn Matheus, senior research and engineering manager for Kimberly-Clark, the company that manufactures popular Cottonelle wipes, insists that flushable wipes are just that.

"We continue to stand firmly behind our claims that our wipes are flushable and they are safe for sewer and septic systems," she said in an interview, adding the U.S. Federal Trade Commission in June closed without action an investigation into whether Kimberly-Clark's marketing of flushable wipes is misleading.

Matheus estimated Canada's flushable wipes market is currently about $20 million per year, up about 10 per cent from 2015.

Darrell Mussatto, Metro Vancouver utilities chairman, is just as convinced that the wipes are a problem, pointing out that utility workers were able to use remote cameras to count flushable wipes travelling through the sewer system during a pilot project last year to test its toilet training campaign.

"We've identified them. The pumps get so full with them they just stop running and we have to go in and declog them."

A wastewater expert with the Municipal Enforcement Sewer Use Group, comprised of 29 Ontario communities, says he stands by his rough estimate of $250 million per year in clog cleanup costs for Canadian utilities because of flushable wipes.

Barry Orr said municipalities are on the hook for more than $1 billion in additional capital costs to build more robust pumps, grinders and coarse screening systems to deal with flushable wipes, but bristled at the suggestion Canada's sewer systems are part of the problem.

"I've been in this industry for 20 years and 20 years ago, I didn't have to go and install grinders into things -- we didn't have the garbage coming. Now we have so much garbage because consumers are confused about what the toilet is used for."

Orr has been working with the Geneva-based International Standards Organization to develop a flushability standard for wipes but he said wastewater experts and manufacturers working on the project disagree about what constitutes "dispersability" -- how long it takes for the product to fall apart in water.

He said establishing a standard might take until 2018 or longer.

Municipalities hoping for federal help have turned to the Competition Bureau, which is responsible for Canada's consumer packaging act governing false or misleading labelling. Spokesman Phil Norris in an email he can't say whether the bureau is looking into flushable wipes because its investigations must be kept confidential.

It's clear that North American consumers love the convenience of flushable wipes, which contributed about US$650 million of a US$5.2-billion North American disposable wipes market in 2013-14, according to figures from the Association of Nonwoven Fabrics Industry, also known as INDA.

The market segment is growing by more than four per cent per year, it says.

Association president Dave Rousse said the industry is currently fighting 14 lawsuits in the United States brought by individuals or municipalities claiming flushable wipes harmed their sewage systems. He added he's confident the industry will win those cases because all the major manufacturers' products have passed INDA's seven-stage product testing standard.

"A flushable wipe that passes our flushability assessment test is incapable of causing harm to a pump," he said. "It is too weak... A six-month-old baby could rip apart our flushable wipes."

INDA has also conducted its own tests on U.S. sewer system clogs, he said, adding almost half were found to be caused by improperly flushed paper towels and most of the rest by non-flushable baby or household wipes and feminine hygiene products.

He conceded that pieces of flushable wipes are often found in clogs but said they don't cause the clogs.