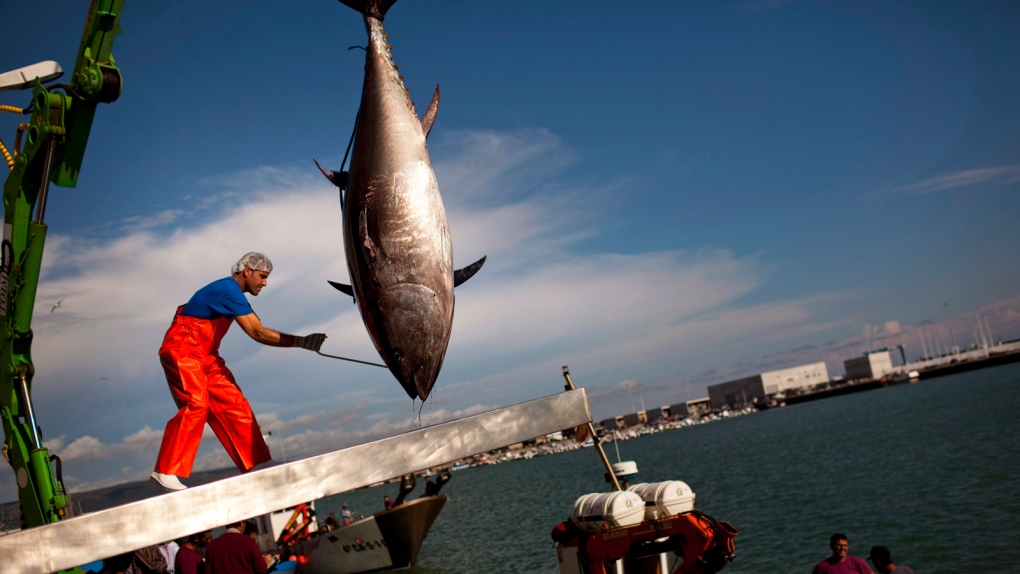 An Atlantic bluefin tuna being lifted by a crane during the opening of the season for tuna fishing in the port of Barbate, Cadiz province, southern Spain, April 25, 2011. (AP / Emilio Morenatti, File)

HALIFAX -- Canada could put an already endangered species of tuna at greater risk by asking an international body to raise the quota for the prized fish, say conservationists who want the catch limit to remain the same to allow the stock to rebuild.

Katie Schleit of the Ecology Action Centre in Halifax said the federal Fisheries Department appears poised to ask for an increase in the quota for western Atlantic Bluefin tuna at a week-long meeting of the International Commission for the Conservation of Atlantic Tunas that begins Monday.

Schleit, who will be at the gathering in Genoa, Italy, plans to press the government to maintain the current quota despite a recent scientific report indicating the lucrative species is more plentiful in both the Mediterranean and the Gulf of St. Lawrence.

"It sounds like they are feeling that they can seek a quota increase this year and we think that's just really risky given that we're finally showing them that what we're doing is working," she said.

"The fact that there's more fish in the Gulf might be artificially painting a rosier picture for the overall population."

The Fisheries Department has not revealed what it will seek for the fishery that's valued at about $10 million annually in Canada. Spokesman Frank Stanek said in a statement that the latest science indicates the stock "has grown substantially in recent years and could support a moderate quota increase."

Member nations agreed to hold the shared quota at 1,750 tonnes for the last several years, with Canada drawing fire two years ago for being the sole country to ask for 250 more tonnes of quota.

A recent report for the commission showed a larger biomass, but stressed that there was a lot of uncertainty about the size of the stock.

"The committee recognizes that the large uncertainty in stock status is exacerbated by the lack of appropriate information/data and scientific surveys," it said, cautioning that the "conclusions of this assessment do not capture the full degree of uncertainty in the assessments and projections."

It's not clear the U.S. National Oceanic and Atmospheric Administration will seek an increase, but it has said it wants a two-year management plan for tuna "that supports the goals of the rebuilding program."

Rachel Hopkins of the Pew Charitable Trusts, an independent research group, also wants the quota to remain at 1,750 tonnes. She argues that the stock remains depleted compared to 1970s levels, adding that U.S. fishermen haven't been able to catch their full quota since 2003.

Fishermen have reported seeing greater numbers of bluefin tuna in the Gulf of St. Lawrence. But Hopkins and Schleit say that could mean the population is simply shifting north rather than growing in abundance.

"What we're worried about is if ... you start to increase the quota because there's a pocket of fish in one place and the other indices are saying there's no fish here, you could really do a lot of damage to the population," she said from Cape Cod, Mass.

"There's a major difference between availability of fish and actual overall abundance."