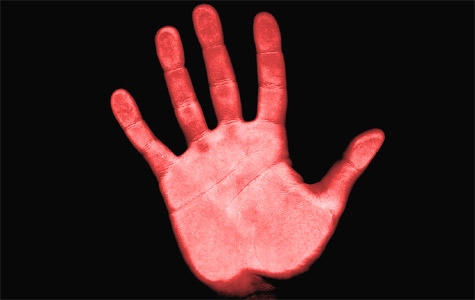 A scan of a human hand is seen in this file photo.

Some time in the distant past, a strange new creature poked its head out of a tidal estuary and made the first steps from murky water to muddy shore to become the progenitor of everything on Earth with four limbs.

"It's a fish-like tetrapod or a tetrapod-like fish -- a fishapod," said Cloutier, a professor at the University of Quebec at Rimouski.

"It's the closest thing that we can get to the ancestor of all tetrapods -- including us."

The 380-million-year-old Elpistostege watsoni, complete with its last meal fossilized in its guts, includes evidence of what eventually evolved into the human hand -- a set of bones in its fins that can't be anything other than two of the very first fingers.

Elpistostege came from Quebec's Miguasha park, an area rich in fossils from the Devonian Era between 420 million and 360 million years ago. Cloutier had been studying the fossils for 30 years, looking for just such a specimen, until a park guide in 2010 noticed something protruding from an eroding cliff just a few steps from the park's museum.

"For years, thousands of visitors and many researchers walked through there," Cloutier said. "Then, by luck, (the fossil) was found."

The fossil was painstakingly cleaned, prepared and studied. It went to a lab in Texas for a high-energy scan to reveal its intricate details.

Elpistostege was about 1 1/2 metres long. It could breathe in air and water. It had a mouthful of sharp teeth and was probably on top of its food chain.

"It's obvious it was a top predator," said Cloutier.

At the time, what is now Quebec was south of the equator and Elpistostege's environment was a warm, rainy, brackish estuary.

The water would have teemed with life -- the Devonian is called the Age of Fishes.

On land, there wasn't much.

"There were no other vertebrates," Cloutier said. "There were some scorpions, some millipedes, some kind of tree-like fern."

What Elpistostege ate should soon be known. Cloutier plans to send the fossil to a Swiss synchrotron that will be able to read the fossils in the creature's stomach.

"We'll be able to see exactly what is in its digestive tract."

Cloutier is most excited by how the discovery changes the picture of how four-limbed animals developed. Earlier fossils reveal the development of shoulder bones, then upper arms, then forearms.

The question has been: at what point did scales and bony fins switch to hands?

The discovery, published in the journal Nature, is causing a big stir in scientific circles.

"This is just a fantastic discovery," Cloutier said. "It's kind of fun."

This report by The Canadian Press was first published March 19, 2020