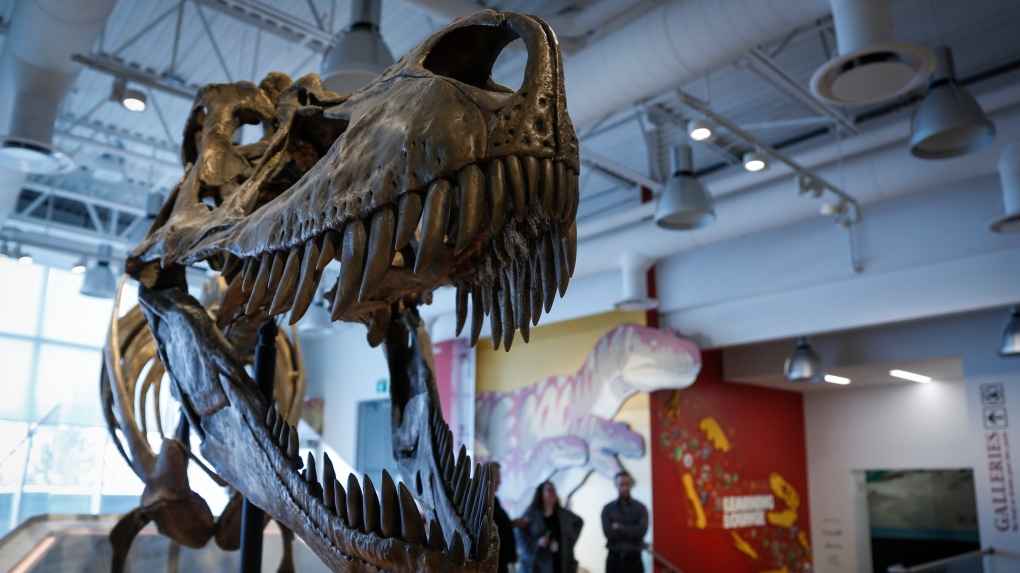 In this file photo, visitors explore the new Learning Lounge at the Royal Tyrrell Museum of Palaeontology in Drumheller, Alta., Thursday, Jan. 16, 2020. Fossils from the Royal Tyrrell have now led to a new discovery: the first instance of cancer in a dinosaur fossil. THE CANADIAN PRESS/Jeff McIntosh

EDMONTON -- It's a diagnosis that took 75 million years.

Canadian researchers who included specialists from surgeons to paleontologists have identified what they say is the first known cancer in a dinosaur. The conclusion not only sheds light on the history of what is still one of humanity's most feared diseases, but also hints at how the ancient lizards may have lived with -- and protected -- each other.

"Dinosaurs might seem like these mythical creatures, larger than life and powerful," said the Royal Ontario Museum's David Evans, one of the co-authors of a paper on the finding published in The Lancet.

"But they were living, breathing animals that were afflicted with some of the same injuries and diseases that we see in animals and humans today."

The Centrosaur fossil was originally collected in the 1970s from a bone bed in Alberta's badlands. The area has provided hundreds of samples of the horned dinosaur.

Paleontologists originally assumed a growth on a leg bone was evidence of a break. That's where it stayed until a chance conversation between Evans and Mark Crowther, chairman of McMaster University's medical faculty and a dinosaur enthusiast.

The two got talking about evidence of dino diseases. That led to an expedition to Alberta's Royal Tyrrell Museum, which has hundreds of fossils that show signs of injury.

The team eventually focused its attention on one fossilized leg bone.

It was examined by cancer specialists, subjected to microscopic analysis and a high-resolution CT X-ray scan.

"This is a bone-forming lesion -- it's laying down bone," said co-author Seper Ekhiari, an orthopedic surgery resident at McMaster.

It wasn't a repaired break either. New bone around fractures forms in predictable layers.

"The bone is very disorganized and doesn't have any clear pattern," Ekhiari said.

The growth extended all the way down the bone, which a fracture scar wouldn't do. Holes in the fossil suggested large, disorderly blood vessels, which cancerous tissues are known to develop.

Finally, the fossil was compared to a human leg bone with bone cancer.

"It's striking how similar the microscope slides are," said Ekhiari.

The conclusion? Osteosarcoma, a cancer that still afflicts more than three out of every million humans today.

"A tumour that had extended this far in a human would almost certainly have metastasized elsewhere. It's very likely the individual would have been in pain."

Ekhiari found himself feeling for his ancient patient.

"We all share a similar body plan and we all share a common ancestor. This would have been a gentle herbivorous animal trying to keep up with the herd."

And yet, cancer didn't kill it. Nor did a hungry meat-eating dinosaur preying on the slow and the weak.

Because the fossil was found with so many others, Evans is confident the sick dino died with large numbers of its fellows in a natural event such as a flood, which raises an intriguing possibility.

"We know these dinosaurs were highly social," he said. "Many horned dinosaurs lived in big herds. They were often living with members of their extended family.

"There's a benefit to living with those groups. It wouldn't be surprising to me that the herd would have protected these sick and weak and lame individuals.

"It would be completely speculative," Evans said. "But it wouldn't be impossible."

This report by The Canadian Press was first published Aug. 3, 2020