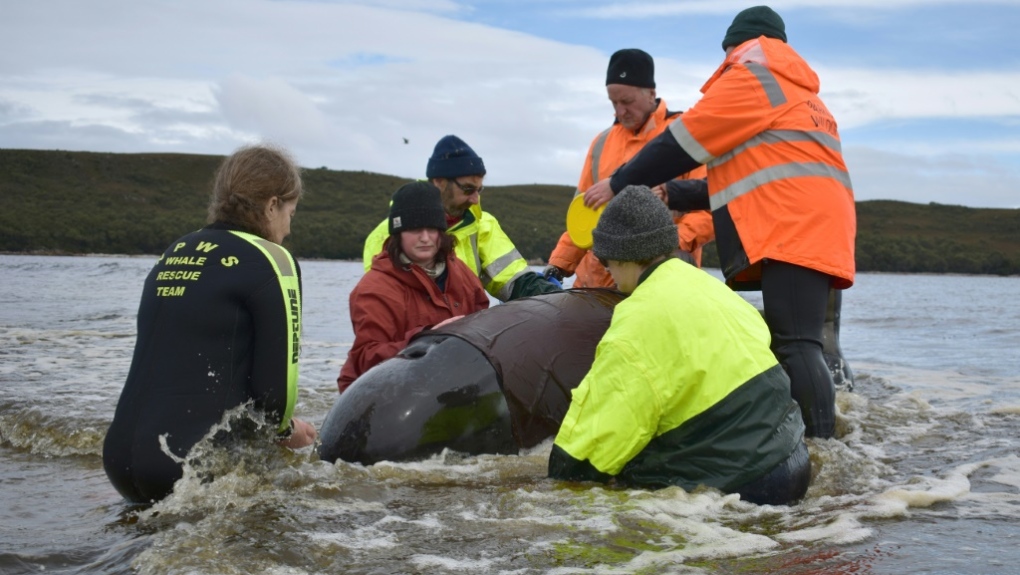 Rescuers working to save a whale beached in Macquarie Harbour on the rugged west coast of Tasmania. (AFP)

SYDNEY, AUSTRALIA -- A lone whale was rescued from among hundreds of carcasses Sunday, taking to 110 the number of creatures that survived a mass stranding in southern Australia.

The country's largest-ever mass stranding saw around 470 pilot whales become stuck in a remote harbour on Tasmania's rugged western seaboard last week, sparking a major effort to save the animals.

It was "absolutely remarkable" another whale was found alive six days after the pod was first discovered, a Tasmania environment department spokeswoman told AFP, adding that it had been taken back out to sea.

More than 100 rescuers toiled for days in chilly waters, but many volunteers and conservationists have now packed up as efforts turned to disposing of the remaining carcasses.

"There has been a tremendous team effort and this combined commitment has allowed us to get as many whales as we can back out to sea," Parks and Wildlife Service manager Rob Buck said of the "complex rescue".

With more than 300 carcasses spread across a 10-kilometre area (about 6 miles), authorities shifted their focus Sunday to a mass sea burial.

Boats have begun towing the dead whales into the open ocean, where they will be released over several days.

Authorities have warned that more whales could be found in the area, with some animals likely to become beached for a second time.

The causes of mass strandings remain unknown, but some experts have suggested the pod may have gone off track after feeding close to the shoreline or by following one or two whales that strayed.