Feeling old? DNA supports an early evolution of our species 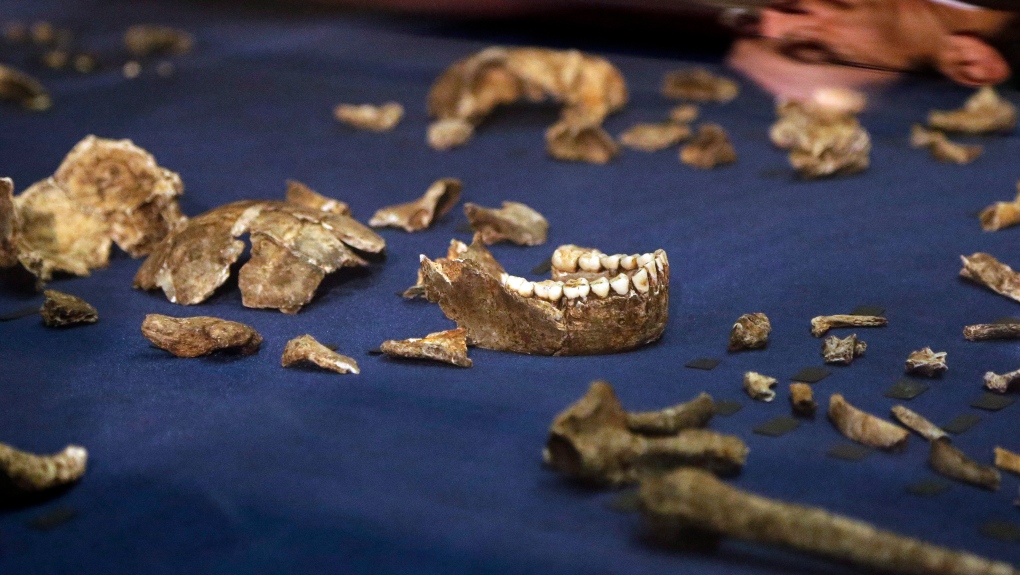 Fragments of bone are arranged with skeletal parts of Homo naledi, with hundreds of other fossil elements during the announcement of a new human ancestor made in Magaliesburg, South Africa, Thursday, Sept. 10, 2015. (Themba Hadebe/AP Photo)

NEW YORK -- A study of DNA from African fossils is providing new evidence that our species is a lot older than scientists had shown.

It concludes Homo sapiens had appeared by at least 260,000 to 350,000 years ago. That fits with a fossil finding in Morocco that was reported in June, which suggested our species had emerged by around 300,000 years ago.

Previously, the oldest known fossils clearly from our species were a bit less than 200,000 years old, from Ethiopia.

For the new work, scientists studied DNA extracted from human remains found in South Africa. The fossils came from three Stone Age hunter-gatherers who lived about 2,000 BC, and four Iron Age farmers who lived about 300 to 500 BC. The researchers compared their genetic material to DNA from other ancient people as well as a variety of modern-day humans.

The goal was to use differences to estimate when various populations split apart from each other. Since those splits had occurred between people, our species must have emerged by the time the splits happened, said Mattias Jakobsson of Uppsala University in Sweden.

Jakobsson and his team put the earliest split they could detect at 260,000 to 350,000 years ago. That's when ancestors of today's Khoisan peoples in Africa diverged from the ancestors of other people, they calculated in a paper released Thursday by the journal Science.

Our species could have emerged much earlier, Jakobsson said.

Not everyone is convinced. The calculations relied on assumptions that could make splits seem older than they really were, said Todd Disotell, an anthropology professor at New York University who did not participate in the new study.

Disotell said he prefers prior DNA work that suggests an earliest split at around 200,000 years.