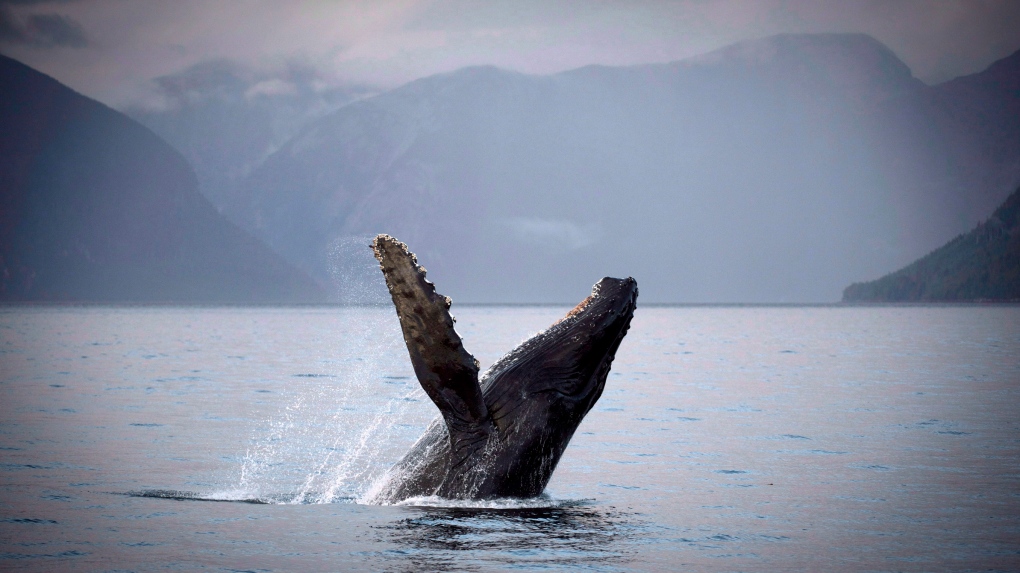 A humpback whale breaks through the water of Hartley Bay along the Great Bear Rainforest, B.C. Sept, 17, 2013. (Jonathan Hayward / THE CANADIAN PRESS)

VICTORIA - While humans have mapped the surfaces of the moon and Mars, our own deep sea remains largely a mystery - but Ocean Networks Canada is working to change that.

The University of Victoria facility has pioneered ocean observatories in the Strait of Georgia, along coastal British Columbia and in the Arctic that stream live data and video from the sea floor.

Now, a five-year $46.6-million investment from the federal government will ensure the world-leading facility continues to advance understanding of the deep ocean, said president and CEO Kate Moran.

"About 5 per cent of the planet's sea floor is mapped," she said. "Our own planet is not well understood yet. We also don't have very good measurements in the very deep ocean to understand how it's changing from climate change."

Ocean Networks Canada was one of 17 facilities that received a total of $328.5 million in funding from the federal government, through the Canada Foundation for Innovation, on Monday.

The facility's first ocean observatory was established in 2006 in Saanich Inlet, northwest of Victoria. Over the past decade, the number of sites that transmit data has grown to more than 50.

The sites allow researchers all over the world to study a wide range of areas including climate change, fish abundance, plate tectonics, tsunamis, deep-sea ecosystems and ocean management.

Human pressures are impacting the ocean at an ever-increasing pace and understanding the change is key to ensuring a sustainable future, Moran said.

All the data is accessible on Ocean Networks Canada's website, allowing anyone to watch live video of the deep-sea floor. One camera, off Vancouver Island's west coast, is on 24 hours a day, while others are on a rotating schedule.

Moran said occasionally discoveries have been made by ordinary observers, including a Ukrainian teenager named Kirill Dudko, who in 2013 saw something unusual on one of the video streams.

"He didn't know what it was," Moran recalled with a chuckle. "He sent us an email saying, 'What was that monster that ate the fish?"'

The facility's researchers looked at the video and couldn't immediately name the "monster." Eventually, the creature was identified as a female elephant seal that dove 900 metres below the surface to slurp up a hagfish.

"That helped the research community understand how those kinds of marine mammals feed, and now this young man is going to be a marine biologist," Moran said.

The facility also has high-precision hydrophones in place that can assess shipping noise. It's developing technology to identify the locations of whales, so alerts can be sent to nearby ships, said Moran.

The number of tankers leaving Metro Vancouver's waters will increase seven-fold if Kinder Morgan Canada's Trans Mountain oil pipeline expansion is built. But Moran said there is already a need to mitigate shipping noise, regardless of whether the project goes ahead.

Other institutions that received funding from the federal government on Monday included Laval University, where researchers are operating Canada's only dedicated research icebreaker the CCGS Amundsen, and Queen's University, where faculty members are developing clinical trials to improve treatment and prevention of cancer.

Science Minister Kirsty Duncan said in a statement that the government's investment demonstrates the value it places in the role that science plays in building a vibrant, healthy society.