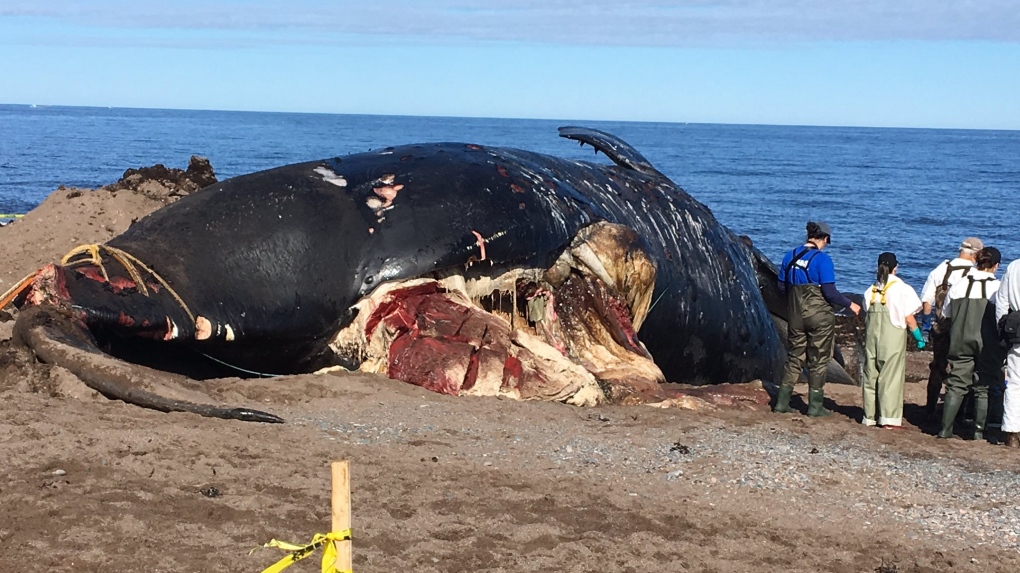 "We are going to have to be dynamic in terms of evolving measures to ensure that we are appropriately putting in a place a precautionary approach to protect these endangered whales," Wilkinson said in an interview Thursday.

Wilkinson said his department is looking at what further actions canb be taken to protect the endangered species in Atlantic Canadian waters.

According a federal study, measures taken so far to protect North Atlantic right whales from being struck by ships and getting caught in fishing gear may not be enough to prevent more from being hurt or killed in Atlantic waters.

Speed restrictions and fishing-zone closures in the Gulf of St. Lawrence have lowered risks that the endangered whales will be harmed, but dangers remain -- especially in the waters outside protected zones, according to the national study.

The review was done late last year by scientists who work in federal departments and universities across Canada. They compiled data compiled by marine-mammal experts over the last three years to get a better idea of how many whales congregate in Atlantic Canadian waters and why.

They also tried to determine the risks that right whales face from vessel strikes and entanglements in the Gulf of St. Lawrence, the semi-enclosed body of water that lies between the four Atlantic provinces and the eastern shores of Quebec.

Six North Atlantic right whales have died in Eastern Canadian waters since early June, and one was spotted alive but entangled in fishing gear last week. No deaths were recorded last year in Canadian waters, but 12 right whales were found dead in 2017, mainly from ship strikes and entanglements.

Every single death is a major blow to the endangered species. Only about 400 whales remain on the planet and none of them are known to have procreated last year.

The federal review confirmed an increased presence of right whales in the gulf since 2015, with the highest concentrations in warmer months. They come seeking food, and their favourite meal -- a particular small crustacean -- has become abundant in there since 2010.

Aerial surveys estimate there were at least 190 right whales in the gulf last year, half the total known population everywhere.

However, just outside of these speed-restricted zones, the danger of deadly strikes became significantly greater, the review says.

This is due in part to increased ship traffic. But there was also a concern about boats speeding up just before they reached the boundaries of the speed-restriction zone, notably in the heavily travelled waters between New Brunswick and Prince Edward Island.

The scientists also raised concern about the size of the slow-down zone being reduced in 2018 in an area north of Anticosti Island, an especially risky area for vessel strikes. This, coupled with limited monitoring of the whales in some of these areas, prompted calls for increased surveillance.

Scientists also noted a heavy concentration of the mammals in busy fishing areas of the gulf in the last three years. Fishing restrictions imposed in some areas have helped, but the whales continue to become entangled -- mainly in snow crab gear. There were at least two entanglements in 2016, seven in 2017 and at least three in 2018.

The federal government took steps several years ago to protect right whales in two areas -- in the Bay of Fundy and in the waters off southwestern Nova Scotia -- designating these areas as critical habitats, which placed tighter restrictions on shipping and fishing activities in these areas.

However, scientists have found the whales have moved out of these critical habitats, with more now congregating in the gulf.

When asked if he would respond to this shift by designating areas within the gulf as critical habitats, Wilkinson said the changing behaviours of the whales calls for a more dynamic approach.

"We have tried to work with those communities to start with the bottom line, which is we need to put in place measure to protect this endangered species, but also want to do that in a manner that is thoughtful," Wilkinson said.

Surveillance and detection efforts have increased since 2017 -- including through listening for whale calls, aerial surveys and boat-based visual observations. But challenging weather conditions and ambient noise can affect the accuracy of the survelliance.