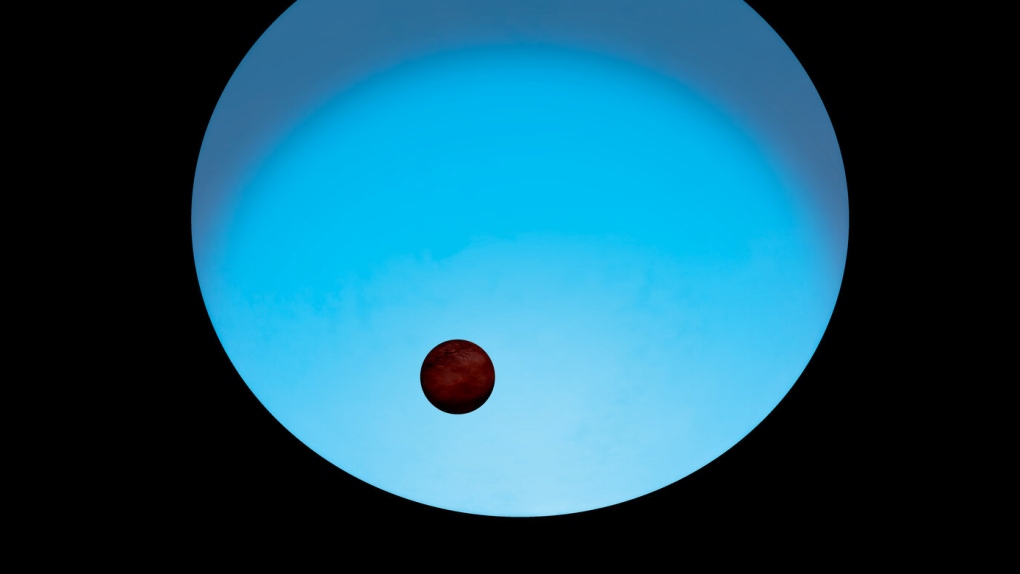 TORONTO -- Research on data from a new satellite is revealing strange new details about one of the “most extreme planets” in our known universe, and the blue, oddly-shaped star it orbits.

WASP-189b is 322 light years away from Earth in the constellation of Libra, has a permanent dayside and night side, and takes less than three Earth days to fully orbit its star -- far faster than our 365 days.

“It is 20 times closer to [its star] than Earth is to the Sun,” Monika Lendl, lead author of the study from the University of Geneva, said in a press release.

WASP-189b is a gas giant, but it’s not any old gas giant. It is around one and a half times as large as Jupiter, and is part of a group called “ultra-hot Jupiters,” which are gas giants that are much larger and hotter than any planet we see in our solar system.

And this planet is even hotter than most other ultra-hot exoplanets scientists have identified. A paper published in the Astronomy & Astrophysics journal last week which detailed the new research described WASP-189b as “one of the most highly irradiated planets known thus far.”

It not only orbits incredibly close to its star, but the star itself, known as HD 133112, is one of the hottest stars we know of that has its own planetary system, at around 2,200 degrees Celsuis hotter than our Sun.

“Because it is so hot, the star appears blue and not yellow-white like the sun,” Willy Benz, professor of astrophysics at the University of Bern and head of the CHEOPS consortium, said in the release.

The dayside of the WASP-189b — the side that faces the star — is roughly 3,400 Kelvin, which is more than 3,120 degrees Celsius. It’s so hot that if there were iron present in the planet’s makeup, it would be gaseous.

In our solar system, the way that our planets spin while they rocket around the sun in their orbit gives them a night and day and allows multiples sides of the planet to get some face time with the sun. This isn’t the case for planetary objects like WASP-189b.

“They have a permanent day side, which is always exposed to the light of the star, and, accordingly, a permanent night side,” Lendl explained.

These details were discovered using data from the CHaracterising ExOPlanets Satellite (CHEOPS), the first European Space Agency (ESA) mission dedicated solely to extra-solar planets. The mission was launched in partnership with Switzerland, and benefitted from contributions from numerous European countries.

The satellite, with its mounted telescope, was launched in December of 2019, and has been orbiting 700 km above Earth ever since. Unlike many previous exoplanet-focused missions, CHEOPS is not interested in identifying new exoplanets, but was designed to peer closely at systems where we already knew an exoplanet is present.

Exoplanets -- or extrasolar planets -- are planets orbiting stars outside of our solar system, and because they’re so far away, we identify them not by finding a coloured speck in the sky, but by measuring dips in the light from stars.

When a star dims, it means something has passed in front of it, blocking some of the light from reaching the Earth. Using this “transit method,” researchers can figure out how large exoplanets are, how big or long their orbit is, and even what materials they are likely composed of.

There is also a change in light when a particularly bright planet goes behind its star, something called an “occultation.”

“Only a handful of planets are known to exist around stars this hot, and this system is by far the brightest,” Lendl said in an ESA release. “WASP-189b is also the brightest hot Jupiter that we can observe as it passes in front of or behind its star, making the whole system really intriguing.

“As the planet is so bright, there is actually a noticeable dip in the light we see coming from the system as it briefly slips out of view.”

While CHEOPS was pointed at WASP-189b, cataloguing all of its strange properties, researchers discovered that the star was unusual for more than just its bright blue colour.

It is spinning so rapidly that it is actually thicker at the equator, distorting the shape itself.

“The star itself is interesting — it’s not perfectly round, but larger and cooler at its equator than at the poles, making the poles of the star appear brighter,” said Lendl. “It’s spinning around so fast that it’s being pulled outwards at its equator! Adding to this asymmetry is the fact that WASP-189 b’s orbit is inclined; it doesn’t travel around the equator, but passes close to the star’s poles.”

This misaligned orbit implies that the planet had been formed further away from the star, and then been somehow pushed closer to it. Lendl suggested that this could mean the planet had interacted with other planets, or even other stars that had changed its orbital path.

According to the research, the planetary and star system is fairly young, which means researchers will be able to use this system to track the “atmospheric evolution of close-in gas giants.”

“This first result from Cheops is hugely exciting: it is early definitive evidence that the mission is living up to its promise in terms of precision and performance,” Kate Isaak, CHEOPS project scientist at ESA, said in the ESA release.

Researchers point out in the paper that CHEOPS allowed them to refine and correct the size of the planet, which had been estimated incorrectly years earlier when the exoplanet’s existence was discovered by telescopes on the ground on Earth.

The paper concludes that the levels of the precision in the data shows that CHEOPS will be an invaluable tool in studying more exoplanets.

“We are expecting further spectacular findings on exoplanets thanks to observations with CHEOPS,” Benz said. “The next papers are already in preparation.”