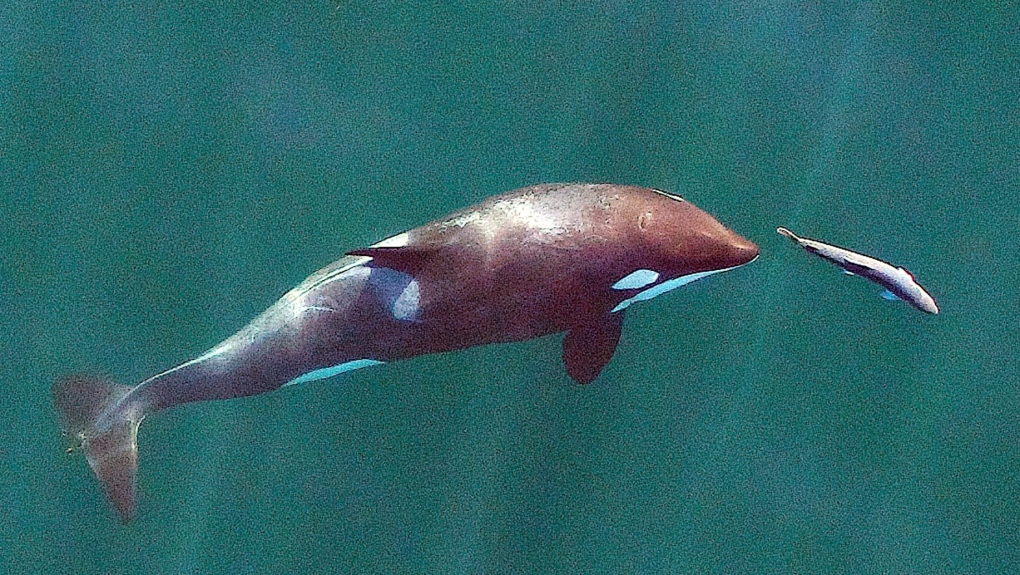 In this Sept. 2017, photo made with a drone, a young resident killer whale chases a chinook salmon in the Salish Sea near San Juan Island, Wash. (John Durban/NOAA Fisheries/Southwest Fisheries Science Center via AP)

SEATTLE -- Harbour seals, sea lions and some fish-eating killer whales have been rebounding along the Northeast Pacific Ocean in recent decades. But that boom has come with a trade-off: They're devouring more of the salmon prized by a unique but fragile population of endangered orcas.

Competition with other marine mammals for the same food may be a bigger problem than fishing, at least in recent years, for southern resident killer whales that spend time in Washington state's Puget Sound, a new study suggests.

Researchers used models to estimate that from 1975 to 2015, marine mammals along the U.S. West Coast ate dramatically more chinook salmon - from 6,100 metric tons to 15,200 metric tons, according to a study published Monday in the journal Scientific Reports.

In the same period, salmon caught by commercial and recreational fishing from Northern California to Alaska declined from 16,400 to 9,600 metric tons.

"This really quantifies yet another pressure on recovering the salmon population," said co-author Isaac Kaplan, a research fishery biologist with the Northwest Fisheries Science Center, part of NOAA Fisheries. Other threats to salmon include habitat damage, dams and pollution.

The emphasis typically has been on managing how fishing affects salmon. But this study brings the rest of the ecosystem, including predators, into the picture, Kaplan said.

Researchers have known marine mammals gorge on salmon in certain hotspots, including the Columbia River between Oregon and Washington. But the predators may be eating even more in the ocean than thought.

The authors estimated how much salmon in different life stages four marine mammals ate based on a number of assumptions, including their weight, diet and size. The species included California sea lions, Stellar sea lions, harbour seals and fish-eating killer whales.

The study does a very good job of accounting for who eats chinook salmon during its various life stages, said Andrew Trites, professor and director of the marine mammal research unit at the University of British Columbia. He was not involved in the study. "They've identified some of the major players, but they haven't identified them all," such as other fish, marine birds and porpoises, he said.

The study found killer whales, which increased from 292 to 644, ate the most salmon in terms of biomass, or weight, while harbour seals ate the greatest numbers of salmon, mostly juvenile fish.

Scientists also found certain populations of fish-eating resident killer whales in southeast Alaska and Canada waters ate a lot more salmon. But the orcas that spend time in Puget Sound ate about the same volume they did 40 years ago, mostly because their numbers have been relatively constant.

Puget Sound orcas, also known as southern resident killer whales, face greater challenges than their orca counterparts farther north because they have a narrower menu of fish stocks and fewer available fish compared with what they need, Kaplan said.

These whales have struggled due to lack of food, pollution and impacts from boats since they were listed as endangered in Canada in 2003 and 2005 in the U.S. There are now just 76, down from a high of 140 decades ago.

Marine mammal protection efforts including the Marine Mammal Protection Act in 1972 have meant good news for other populations. Harbor seals, for example, increased 210,000 to 355,000.

"Every other one of those predators has a chance to eat that salmon before. They're the last ones to sit at the table and get a chance to eat," said Brandon Chasco, lead author of the study and an Oregon State University postdoctoral student.

Meanwhile, harbour seals feast on millions of smaller, juvenile salmon as they migrate to the ocean from local rivers.

"They're first in line to eat the prey before they become adults," Chasco said. "The question is whether those fish would have died in the ocean, or if they're taking prey out of the mouths of predators farther downstream."

The authors say efforts to restore threatened salmon runs may be masked by the increasing numbers eaten by these marine mammals.

The study was paid for by the Pacific Salmon Commission, which was formed by the governments of Canada and the United States in 1985.