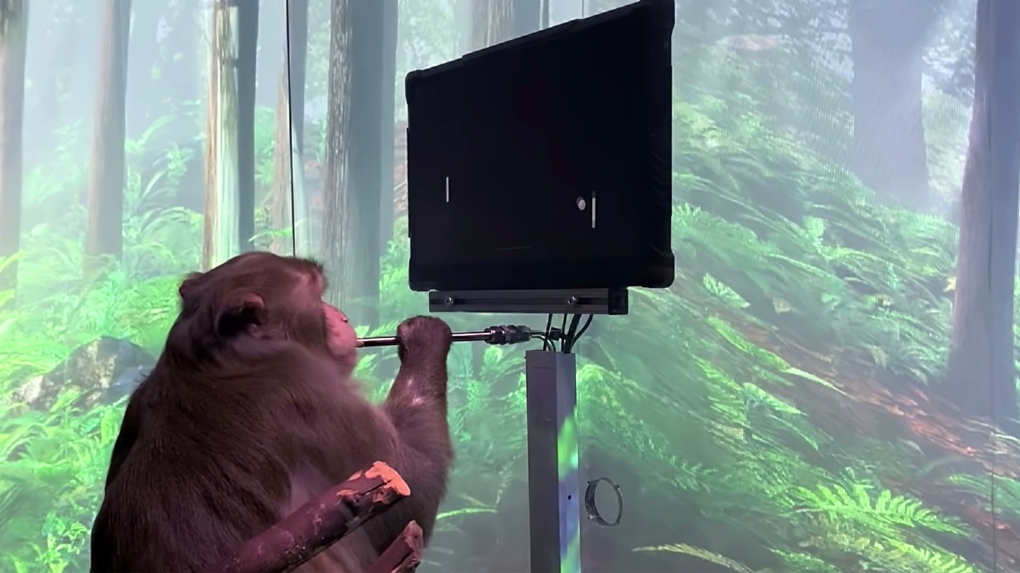 Neuralink, the implant company owned by SpaceX and Tesla CEO Elon Musk, has released a video in which a monkey appears to play the computer game Pong using only its mind. (Neuralink/Youtube)

Neuralink, the implant company owned by SpaceX and Tesla CEO Elon Musk, has released a video in which a monkey appears to play the computer game Pong using only its mind.

The nine-year old male macaque, named Pager, has a Neuralink device implanted in both sides of its brain, according to a YouTube video posted by the company on Friday.

Neuralink is developing Bluetooth-enabled implantable chips that can communicate with computers via a small receiver, and has previously demonstrated the technology in pigs.

"He's learned to interact with a computer for a tasty banana smoothie delivered through a straw," says the narrator in the video as Pager moves an onscreen cursor using a joystick.

The two Neuralink devices record brain activity via more than 2,000 tiny electrodes implanted in Pager's motor cortex, which controls hand and arm movements, according to the video.

Neuralink feeds the information from the monkey's neurons into a decoder, which can then be used to predict Pager's intended hand movements and model the relationship between brain activity and joystick movements.

After a short calibration period, the output from the decoder can be used to move the cursor, instead of Pager manipulating the joystick. Then the joystick is disconnected and Pager is shown moving the cursor using only his brain.

"Our goal is to enable a person with paralysis to use a computer or phone with their brain activity alone," says the narrator, explaining that people would calibrate their decoder by imagining hand movements.

Musk also discussed plans for the devices on Twitter on Thursday.

The first iteration of the device "will enable someone with paralysis to use a smartphone with their mind faster than someone using thumbs," he tweeted.

"Later versions will be able to shunt signals from Neuralinks in brain to Neuralinks in body motor/sensory neuron clusters, thus enabling, for example, paraplegics to walk again," he added.