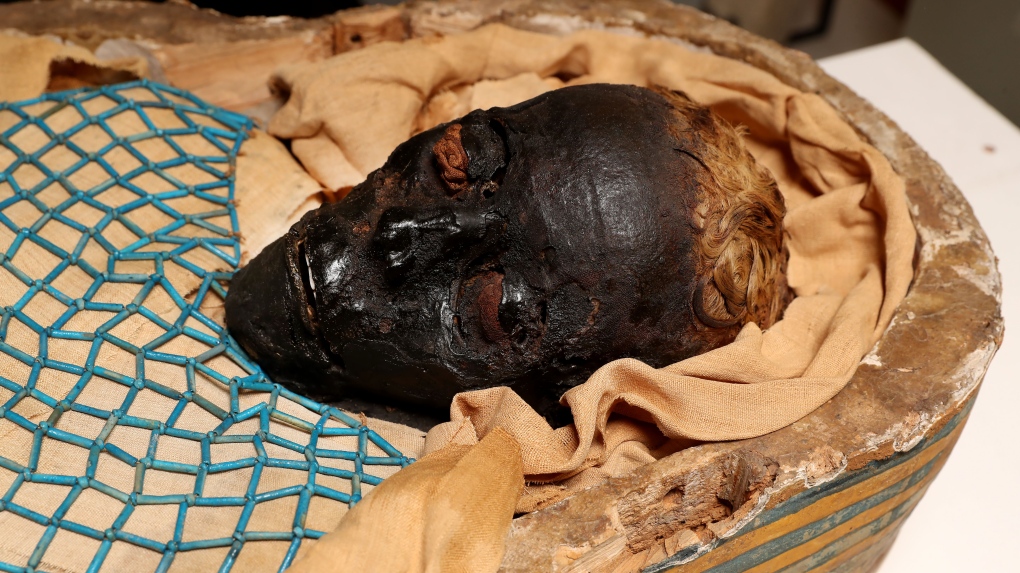 Takabuti, seen here, died suddenly from a stab wound in her back. (University of Manchester)

TORONTO -- It’s been a mystery since she was first unravelled in 1835, but researchers in Northern Ireland have discovered what happened to a famous Egyptian mummy.

The research team, funded by a support group for the Ulster Museum, used DNA testing, X-ray and CT scanning, hair analysis and carbon dating to determine a female mummy named Takabuti died suddenly from a stab in the upper back, near her left shoulder.

“It is frequently commented that she looks very peaceful lying within her coffin, but now we know that her final moments were anything but and that she died at the hand of another,” Eileen Murphy, a bioarcheologist from Queen’s University Belfast, said in a news release.

Takabuti was a married woman who died in her 20s, more than 2,600 years ago in the city of Thebes, which is modern-day Luxor, Egypt.

The researchers found her DNA more closely resembles modern Europeans than modern Egyptians. They also discovered she had an extra tooth and an extra vertebra.

Her coffin was opened in January 1835, when she was unrolled at Belfast Natural History Society’s museum.

“Trawling the historical records about her early days in Belfast, it is clear that she caused quite a media sensation in 1835,” said Rosalie David, an egyptologist at the University of Manchester. “She had a poem written about her, a painting was made of her prior to her ‘unrolling’ and accounts of her unwrapping were carried in newspapers across Ireland.”

Researchers had previously thought that a mysterious object in her body cavity was her heart, but now believe it is material used to cover the stab wound. Her heart has been found intact and perfectly preserved.

Greer Ramsey, curator of archeology at National Museums Northern Ireland, said the fact that her heart is still intact offers clues to how she was handled after her death.

“The significance of confirming Takabuti’s heart is present cannot be underestimated,” he said. “In ancient Egypt, this organ was removed in the afterlife and weighed to decide whether or not the person had led a good life. If it was too heavy it was eaten by the demon Ammit and your journey to the afterlife would fail.”

Takabuti is currently on display at the Ulster Museum in Belfast.