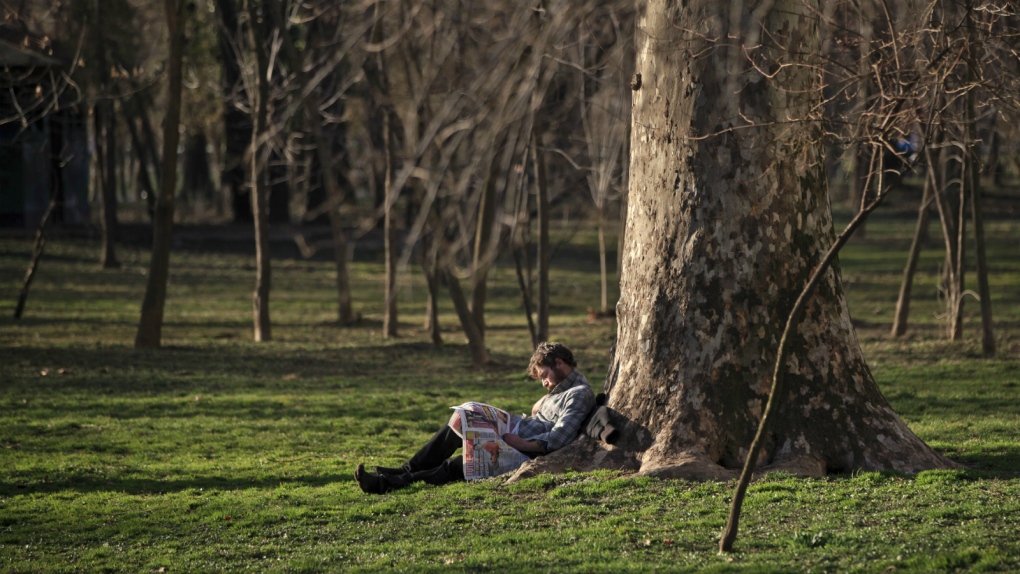 A man enjoys the sun leaning against a tree on an unseasonably warm winter day, in Bucharest, Romania on Tuesday, Feb. 16, 2016. (AP / Vadim Ghirda)

WASHINGTON -- The January figures are in, and Earth's string of hottest-months-on-record has now reached nine in a row. But NASA said January stood out: The temperature was above normal by the highest margin of any month on record.

NASA said January 2016 was 1.13 degrees Celsius above normal. The National Oceanic and Atmospheric Administration, which calculates temperatures differently, said last month was 1.04 degrees Celsius, which is the second biggest margin in history. NOAA said the greatest was this past December.

January's average global temperature was a record 13 degrees Celsius, easily beating the old January record set in 2007, according to NOAA. Records go back to 1880.

There were colder-than-normal patches in parts of the United States, Europe and Asia in January, but they were overwhelmed by incredible "off our chart" warming in the Arctic region, according to NOAA climate scientist Jessica Blunden. Siberia, northwest Canada, and a lot of Alaska were at least 9 degrees Fahrenheit warmer than normal, she said.

That heat was why there was record low sea ice in the Arctic for this time of year, when sea ice grows, Blunden said.

The string of nine consecutive record hot months matches June 1997 to February 1998, which was the last time Earth had a large El Nino. It is still behind the 10 straight months of record heat in 1944, Blunden said. It's likely we'll tie that record in February, she said.

The current El Nino - an occasional natural warming of parts of the Pacific that changes weather around the world and spikes global temperatures - is tied with 1997-1998 for the strongest on record, according to NOAA. And while it has been predicted to ease soon, it has not lessened yet, said NOAA Climate Prediction Center deputy director Mike Halpert.