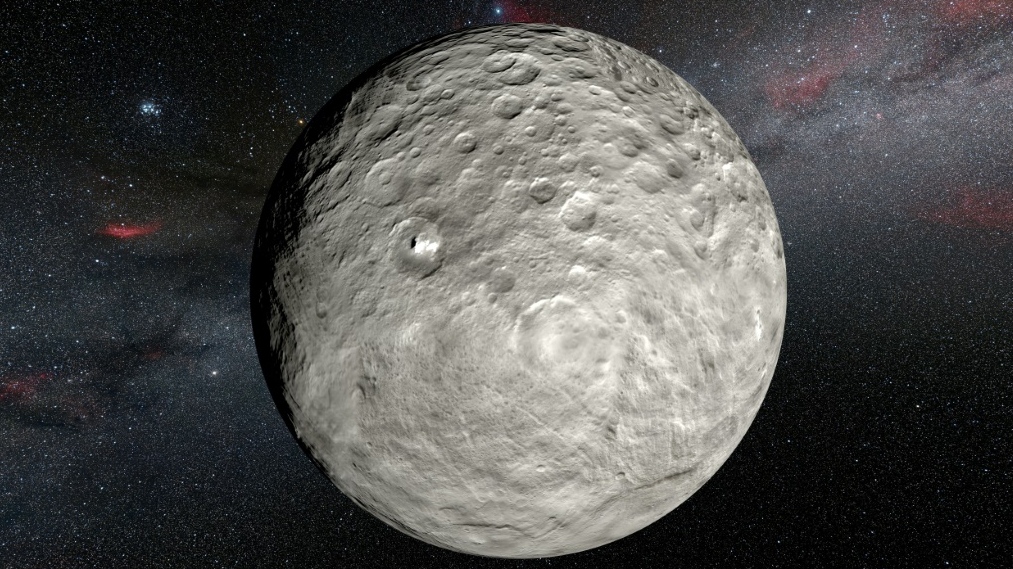 Ceres is the largest object in the asteroid belt between Mars and Jupiter and has its own gravity. (AFP)

PARIS, FRANCE -- The dwarf planet Ceres -- long believed to be a barren space rock -- is an ocean world with reservoirs of sea water beneath its surface, the results of a major exploration mission showed Monday.

Ceres is the largest object in the asteroid belt between Mars and Jupiter and has its own gravity, enabling the NASA Dawn spacecraft to capture high-resolution images of its surface.

Now a team of scientists from the United States and Europe have analysed images relayed from the orbiter, captured around 35 kilometres (22 miles) from the asteroid.

They focused on the 20-million-year-old Occator crater and determined that there is an "extensive reservoir" of brine beneath its surface.

Using infrared imaging, one team discovered the presence of the compound hydrohalite -- a material common in sea ice but which until now had never been observed off of Earth.

"We can now say that Ceres is a sort of ocean world, as are some of Saturn's and Jupiter's moons," she told AFP.

The team said the salt deposits looked like they had built up within the last two million years -- the blink of an eye in space time.

This suggests that the brine may still be ascending from the planet's interior, something De Sanctis said could have profound implications in future studies.

"The material found on Ceres is extremely important in terms of astrobiology," she said.

"We know that these minerals are all essential for the emergence of life."

Writing in an accompanying comment article, Julie Castillo-Rogez, from the California Institute of Technology's Jet Propulsion Laboratory, said the discovery of hydrohalite was a "smoking gun" for ongoing water activity.

"That material is unstable on Ceres' surface, and hence must have been emplaced very recently," she said.

In a separate paper, U.S.-based researchers analysed images of the Occator crater and found that its mounds and hills may have formed when water ejected by the impact of a meteor froze on the surface.

The authors said their findings showed that such water freezing processes "extend beyond Earth and Mars, and have been active on Ceres in the geologically recent past."